Anti-Jewish racism online is a significant and growing threat, says Danny Stone, Chief Executive of the Antisemitism Policy Trust. This short piece details some of the consequences of online antisemitism, the risk for advertisers and the simple steps that can be taken to protect brands, clients, the industry, and citizens, from harm.

The Antisemitism Policy Trust is currently working on no less than four projects which will highlight major fallibilities or demonstrate tacit encouragement for racism on mainstream social media platforms. This isn’t new. Our previous work has highlighted that on average there are 170,000 antisemitic searches on Google in the UK each year, searches for ‘Holohoax’ increase by 30% on Holocaust Memorial Day, and that Google’s safe search feature isn’t really safe. We were part of the team of those that convinced Facebook Holocaust denial was a problem.

We do this work to inform platforms, to highlight the scale of the problem but also because the hate online has a direct link to the offline consequences. Q-Anon accounts inspired a far-right German group to storm the Bundestag in August 2020, a prelude to the storming of the US capitol in January 2021. Meanwhile, the development of the online male supremacist ecosystem has led members of the involuntary celibate (incel) community to carry out at least six mass killings since 2014. Numerous terrorist attacks have been glorified online, on alternative platforms like Bitchute, and the so-called ‘gamification’ of the attacks inspires further harm, bringing us full circle.

This is the reality of the online world, and advertisers – the real power brokers – must keep your eyes open, and act. A number of you already have.

It is four years since the Times revealed top high street brands had inadvertently been funding terrorists and other Neo-Nazi extremists on YouTube. However, advertisers are clearly divided on how to handle the issue of advertising on sites that contain hate speech and disinformation. A 2020 World Federation of Advertisers survey revealed a third of respondents were unlikely to halt advertising over social media hate speech failures.  Even the well-publicised #StopHateForProfit Facebook walkout found some brands didn’t stop spending, and despite promises from Google to transform their ad-placement policies, advertisers cannot fully control where their ads will appear – in spite of consumers reportedly taking note.

But advertisers have the power to act. And when advertisers act, they enforce change. Just look at the success of ‘Stop Funding Fake News’ and you’ll see the direct impact that advertisers’ decisions can have on a misinformation platform. Last year, the campaign announced that it had successfully forced Voice of Europe, notorious for its vile anti-Muslim content, to shut down thanks to advertisers’ action. Many reputable companies blacklisted and therefore demonetised the site, and the hundreds of thousands of US Dollar advertising income was slashed, ensuring that hate was not sponsored. 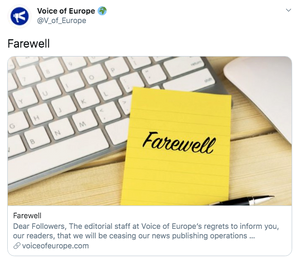 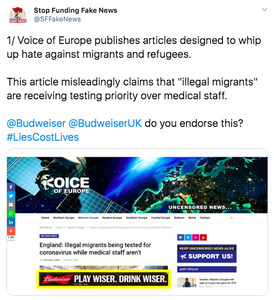 There are a number of things that you can do now: 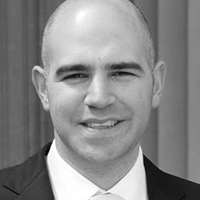 Danny is Chief Executive of the Antisemitism Policy Trust.
Get a demo
Topics
Send feedback