Google Chromebook, Zoopla, and Amazon Prime saw the largest lift in Ad Awareness scores among all brands in the UK in July 2022.

YouGov’s monthly analysis of brands who enjoyed the highest month-on-month increase in Ad Awareness in the UK features Google Chromebook, Zoopla, and Amazon Prime for the month of July 2022. Ad Awareness asks consumers if they have seen an advertisement for the brand in the past two weeks, on which basis brands are awarded the title of Advertisers of the Month.

According to data from YouGov BrandIndex – which monitors consumer perceptions toward brands daily – Google Chromebook secured the top spot with a rise of 7.0 points in its Ad Awareness score this month. It saw a jump from 8.1% on June 26 to 15.1% on July 25. This coincides with the release of the new Chrome OS Flex, a modern operating system designed for businesses and schools to easily install and run on their old and existing hardware (PCs and Macs). Google recently announced that the operating system is out of beta, with support for more than 400 devices.

British property website Zoopla recorded a jump of 6.5 percentage points from 12.9% on June 26 to 19.4% on July 25. Zoopla recently launched its new campaign ‘If you want to know, just ask Zoopla’. The campaign’s two TV spots position Zoopla as the answer to the discomfort and awkwardness that comes with the curiosity surrounding what others have paid for their homes, encouraging people to simply conduct an online search.

In third place, Amazon Prime saw a growth of 6.3 points in its Ad Awareness score through the month. It rose from a minimum score of 27.3 on June 26 to a maximum score of 33.6 on July 24. On July 21, Amazon joined hands with many other leading UK businesses to become a part of the British government’s ‘Help For Households’ campaign. Its increase in visibility can also be attributed to the two-day Prime Day event that took place on July 12 and 13. 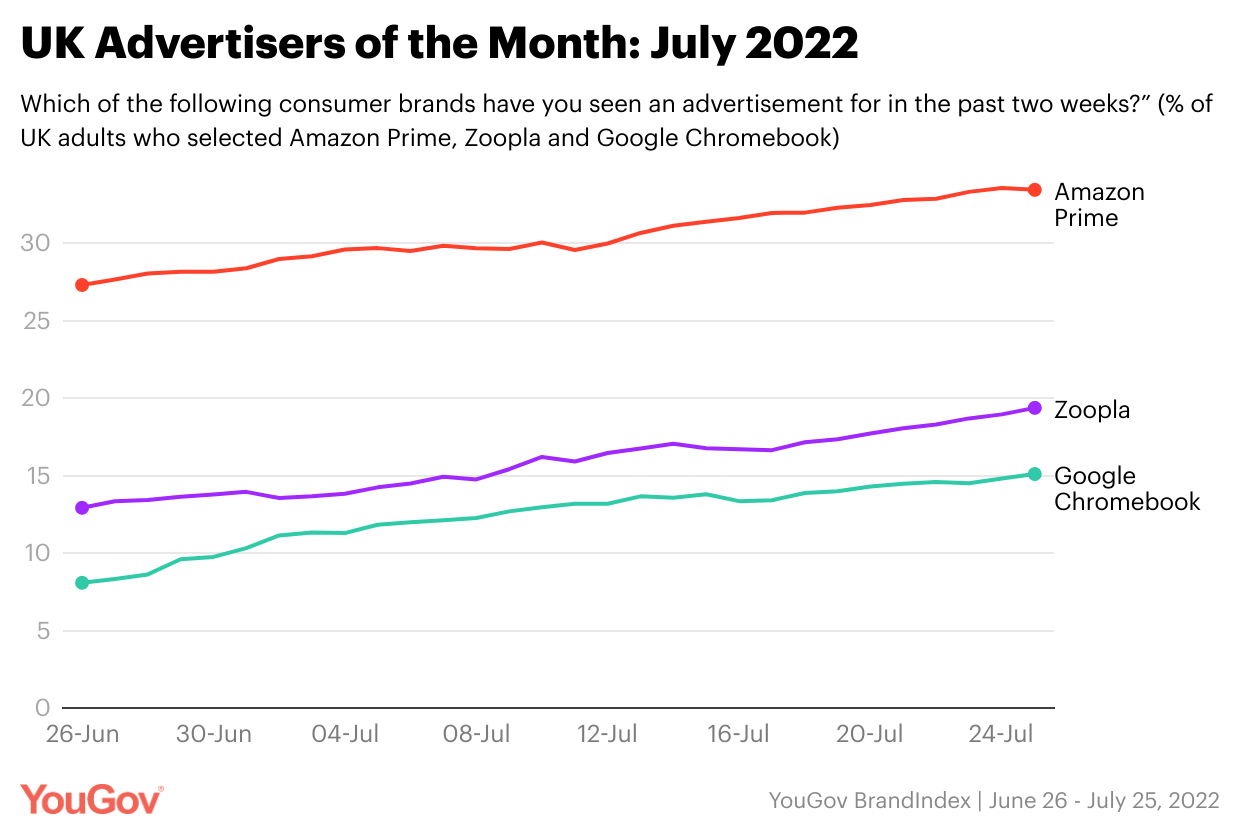 Methodology: YouGov BrandIndex collects data on thousands of brands every day. A brand’s Ad Awareness score is based on the question: “Which of the following consumer brands have you seen an advertisement for in the past two weeks?” and delivered as a percentage. The data is based on the interviews of UK adults aged 18+ between June 26 and July 25, 2022. Ad Awareness scores are based on a four-week moving average. The change in scores for each brand is calculated by taking the difference between the highest and lowest scoring days within the period. Learn more about BrandIndex.