This month, Al Ansari Exchange is the brand that has achieved the biggest uplift in its Ad Awareness in the UAE, according to YouGov’s BrandIndex Ad Awareness score.

For this, the brand runs a ‘Grand Summer Promotion’, which this year launched at the end of May, with the promotion dates reaching from 1st June to 31st July.

The ad campaign for the summer promotion focuses on the prizes that are up for grabs, which include AED 1 million in cash and a brand new car. To be eligible customers must make transactions with the company – including but not limited to foreign currency exchange and air ticket and holiday package payments.

The campaign is being pushed and featured on out of home and digital platforms, and appears to have been received well by the UAE public.

Ad Awareness (whether someone has seen an advert for the brand) has risen by 10 points, from +28 at the end of May to +38 now. 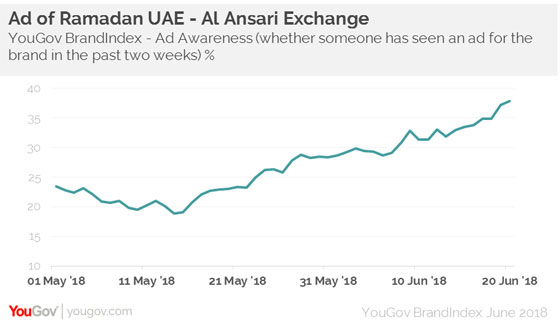 Among those who would already consider using the brand, Ad Awareness has achieved particular cut through, rising from +54 to +73 in the same time period.

Not only are people noticing the ad, but it has got people talking too. Al Ansari Exchange’s Word of Mouth score (whether you have talked about a brand with friends of family) has leapt from +24 to +32.

Whether or not the campaign helps the brand to achieve its strategic aims remains to be seen, but the campaign has certainly elevated the company’s profile at the very least.