This month, Chemist Warehouse is the brand which has achieved the biggest uplift in its Ad Awareness in Australia, according to YouGov’s BrandIndex Ad Awareness score.

Chemist Warehouse describes itself as ‘the cheapest online pharmacy in Australia’, and sells a vast range of pharmaceutical and self-care goods.

The company recently partnered with Men’s health charity Gotcha 4 Life to support mental health in males across the country.

At the beginning of June, Chemist Warehouse released a new advertising campaign for a Lynx product: the ‘Gotcha’ body spray.

The campaign has resonated with the general public in Australia, with Chemist Warehouse’s Ad Awareness score (whether someone has seen an advert for a brand) rising from +40 since the ad was released on YouTube to +44 at its peak on the 12th June. 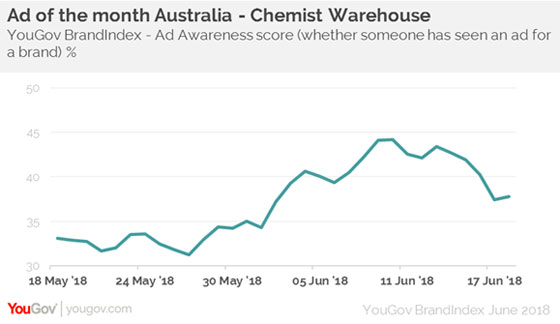 The advert has had particular cut through among the brand’s Current Customers (those who have shopped with them in the past six months), with Ad Awareness among this group rising from +55 to +67.

Of course it is important for the brand (and the charity it has partnered with) that people are noticing the adverts, but turning awareness into sales is key. In good news for the brand, there has been a subsequent rise in people who are considering shopping there, with its Consideration score (whether you would purchase from a brand) rising from +41 to +51.

Chemist Warehouse can be pleased that their collaboration with Gotcha 4 life is being perceived well by the public, and that their recent campaign for Lynx has increased their awareness and public brand perception.