Global Village is the brand that has achieved the greatest uplift in YouGov's Ad Awareness Index in the UAE in November.

Global Village has released a number of adverts to promote this season, highlighting the new retail and entertainment offerings, such as a floating market, a redesigned “Wheel of the World”, Superloop stunt shows, Circus shows and more. The multicultural festival park reopened for its 23rd season on the 30th October 2018 and will remain open until the beginning of April 2019.

The campaign made use of both online and print adverts, as well as out of home advertising with a branded ice cream truck giving away complimentary ice cream to the general public in Dubai.

The results of such efforts are clear to see, with YouGov BrandIndex data showing the brand’s Ad Awareness score (whether someone has seen an ad for the brand in the past two weeks) increased by an impressive 20 points, from +15.9 on the 1st October to +35.9 on the 24th November. 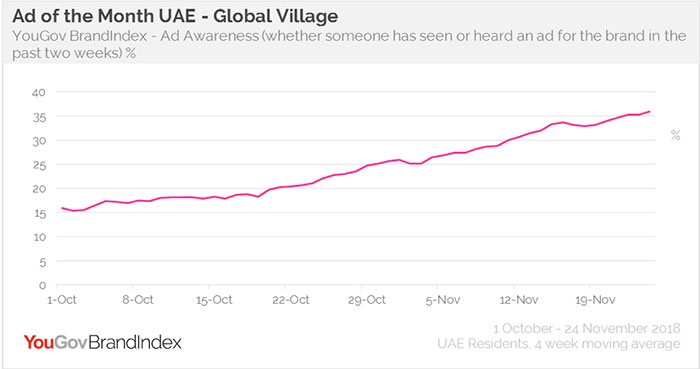 UAE consumers are not only noticing Global Village’s adverts, but they are also talking about the brand with friends and family. The brand has seen a 15.4 point increase in their Word of Mouth score over the same time period, which jumps to a 28.5 point increase when looking specifically at respondents who have said they would already consider visiting the multicultural festival park.

In the coming months YouGov BrandIndex results will show how successful Global Village’s 23rd season is, not only in terms of attracting customers, but also the perceptions among those who have attended.