It's been a very busy few weeks on Warc's Awards page, with cases from the Creative Effectiveness Lions, the North American Effies and the EACA Care Awards all now available for our subscribers to browse. But perhaps the biggest awards news of the season (for us at least) was the announcement of the first-ever Warc Prize for Asian Strategy, which was won by Coca-Cola Japan for 'Crush Eco', its striking launch campaign for mineral water brand I Lohas.

At the Cannes festival last month, I had a chance to catch up with Coca-Cola Japan's Vice President of Creative Excellence - and author of the prize-winning case study - David Elsworth. And David agreed to sit down for an interview about the development of the winning campaign.

I Lohas' positioning for the campaign was based around a product innovation: its easily-crushable, lightweight, 100% recyclable bottle. With the new bottle, Coca-Cola was able to cut costs and save energy. This green message was promoted through an integrated marketing campaign, which told an uplifting brand story of "rock 'n' roll eco".

In an attempt to avoid turning off customers by seeming too worthy - a common pitfall for green campaigns - Coca-Cola built a strong "fun" positioning, through focusing its marketing messages on the physical pleasure of crushing the I Lohas bottle, employing an A-list celebrity ambassador (actor Hiroshi Abe) and launching and promoting an extremely catchy theme song.

For David, it was obvious that the campaign would be an instant hit - even before the brand had been brought to market.

David Elsworth on what made the campaign a hit (0:51)

Sure enough, the campaign achieved standout business results: against flat category sales, I Lohas has captured a market share of over 40% since launching in 2009.

So congratulations are in order to all involved with the campaign at Coca-Cola Japan. Worthy winners. 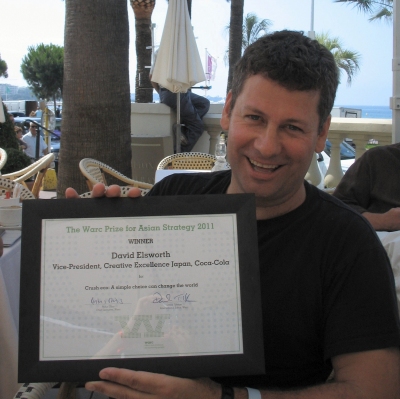