TV’s share of total UK advertising expenditure has held steady at 25% over the last decade, despite the rise of online advertising, and TV can still be regarded as the largest ad medium in the UK, according to the latest results from the AA/WARC Expenditure Report, released today.

A conventional view of the ad market would suggest that this gave internet a 48% share of total adspend, placing it as the largest ad medium in the UK (as it has been since 2011). But this would not tell the whole story.

‘Internet’, as a term, is archaic in the phrasebook of modern marketing. Yet from a research perspective, it is still used to encompass the panoply of formats being adopted to reach the online consumer. These include social, native, content & advertorial, outstream/in-read video, search, pre/mid/post roll video, recruitment classified, banners, rich media and many more, all of which can be served via a desktop/laptop PC, mobile or tablet device, and all of which are attracting increasing investment.

Further, a growing amount of online ad inventory is being traded programmatically (i.e. automatically, by machines). Seventy two percent (£2.71bn) of online display advertising was bought and sold in this way last year, according to the Internet Advertising Bureau.

So as the online ecosystem continues to diversify, a catch-all term to encompass it becomes inadequate in the pursuit for precision. So too does comparing this umbrella term with other media to calculate accurate shares of UK adspend.

Should the money spent on Google AdWords be compared directly to that spent on a John Lewis Christmas spot, for example? Does the money spent to list property online weigh equal with that used to place posters on busses?

The answer is yes, given that every £1 spent to sell a product is worth the same, regardless of the medium used to sell it. However, in order to accurately identify the precise make-up of the UK advertising market, a strong case could be made to the contrary.

As an independent and impartial organisation since inception, WARC is well placed to present such a case. 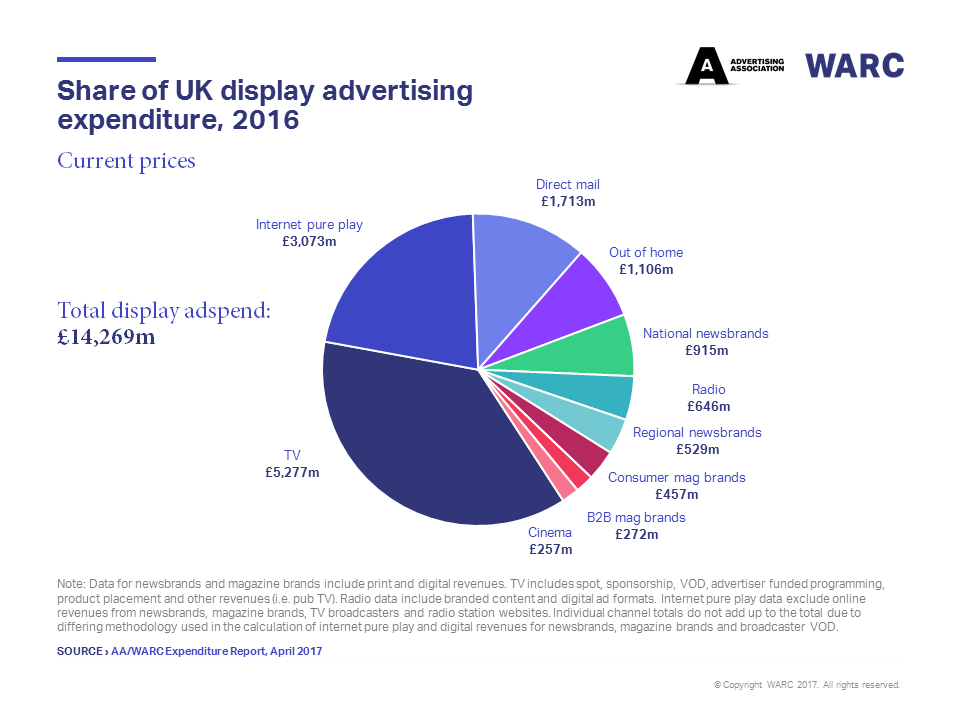 Display advertising accounted for just over two-thirds of total UK adspend in 2016, a share that has been steadily decreasing since 2010. The main reason for this shift is the rise of online paid-for-search, a market worth £5bn last year, up 122.3% over the period. Indeed, we believe that one in four pounds spent on advertising this year will go to search.

Search regards fees paid by advertisers to online companies to list and/or link their domain to a specific search word or phrase. If we were to say that this form of advertising is very different to a radio spot or a magazine spread, and discount it, along with money spent on classified ads for jobs, second hand motors, property etc. (10% of total UK adspend), we’re left with the display definition previously cited. Charting the display market, as above, portrays a very different advertising landscape, one in which TV, not internet, holds the most value.

As well as being display-only, the chart also employs a “pure play” definition of internet, a value developed by WARC in conjunction with the IAB/PwC to measure online-only businesses. This total excludes income from ads on the digital platforms of traditional media owners. Therefore, revenues from ads on ITV Hub are assigned to TV, and those on theguardian.com to newsbrands, et cetera.

We can expand on this idea further by splitting out display, search and classified advertising expenditure across all traditional and online pure play channels. Doing so creates what we believe to be the most accurate portrayal of the UK ad market available. 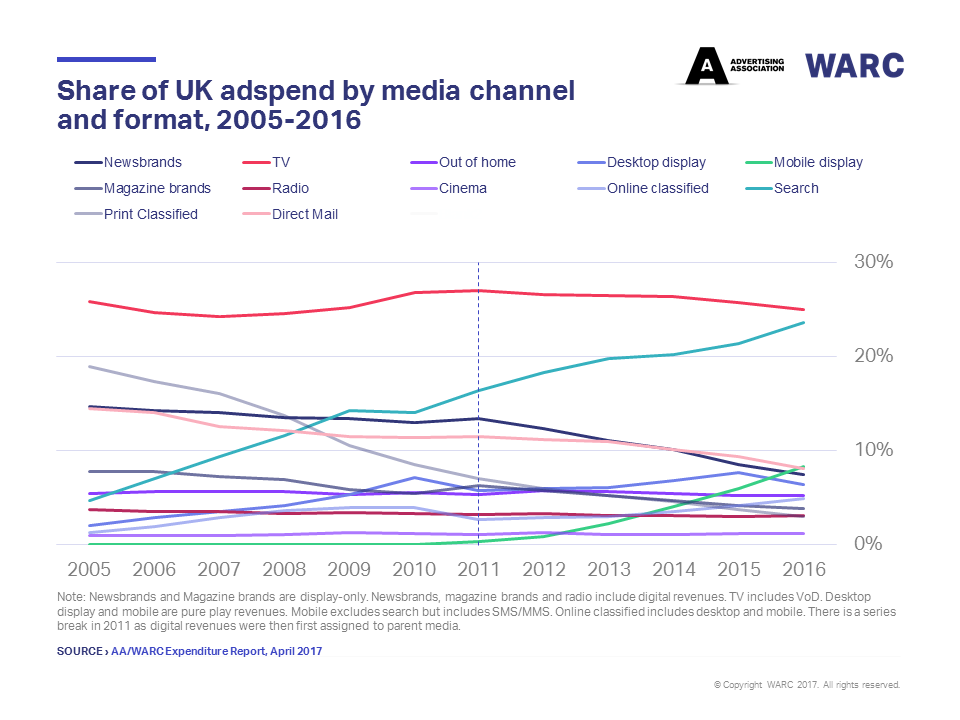 The picture that emerges is truly remarkable. We can see that, at approximately 25%, TV’s share of total UK advertising spend has held steady over the last decade. This despite the rise of online pure play formats, particularly search and mobile display. What this suggests is that, far from cannibalising TV spend, online ads have been used in conjunction with TV campaigns over this time.