Last year was unlike anything the UK’s advertising industry had witnessed before. Total investment grew by more than a third, adding value faster than at any other time during our four decades of market monitoring.

Given the acute shock to the system in 2020, a rebound was to be expected. But if we were to map the trajectory of market growth before the pandemic – assuming for a wonderful moment that it never happened at all – we see that last year effectively amounted to an overcorrection of £4bn.

For the statisticians among you, the relationship between the UK’s gross domestic product (GDP) and advertising spend between 1982 and 2019 was R² 0.86 (whereby 1 is a perfect correlation). This link more than halved during last year’s recovery, to the point where one could feasibly consider it an anomaly. 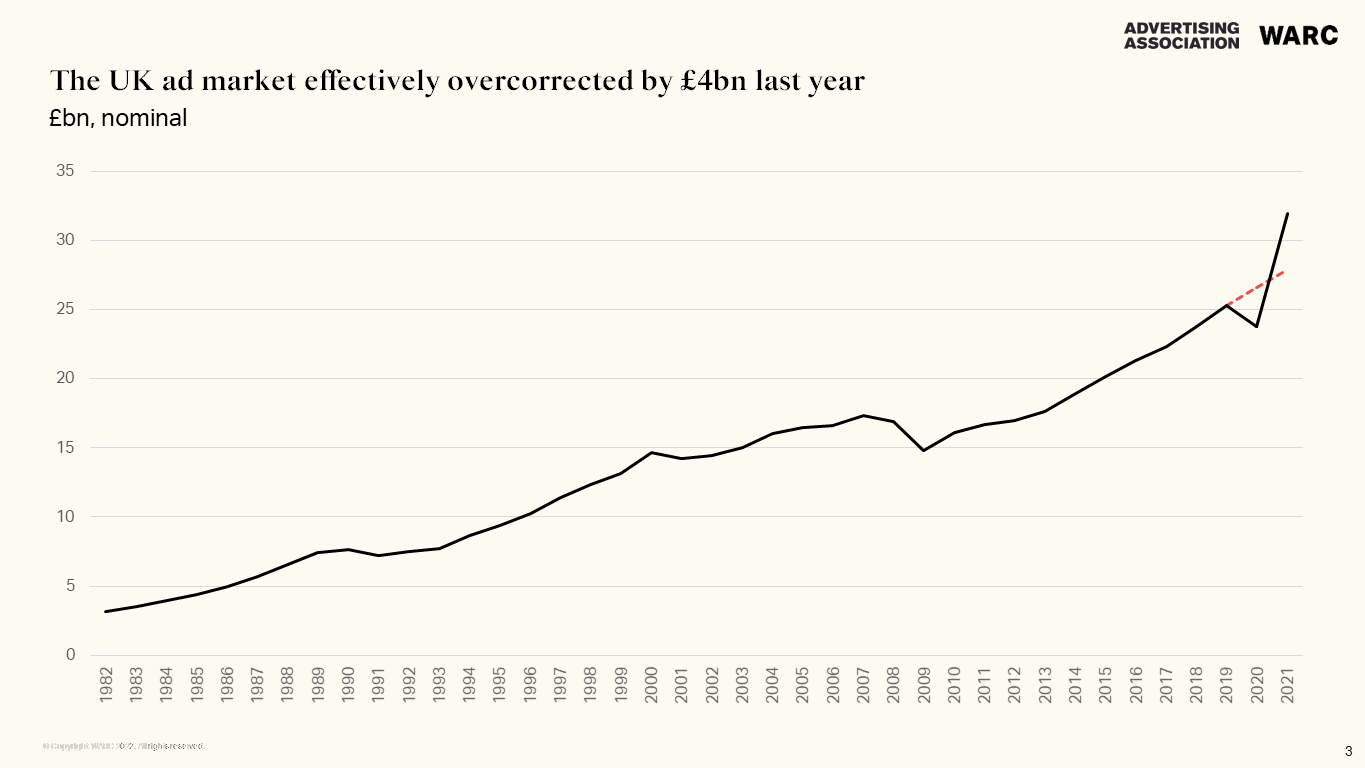 So why the disconnect? While most media ended 2021 close to forecast (we were able to predict TV’s performance with a 0.6% margin of error, for example) online formats – combined – exceeded expectations by almost £2.5bn last year.

Some of this discrepancy can be ascribed to outstanding results from established online pure players – buoyed by the release of pent-up investment as the dust began to settle on 2020’s annus horribilis. Looking beyond the headlines, though, we can start to see a more structural and long-lasting shift in the UK’s online sector, one which alludes to a new era of advertising.

Three in every four pounds spent on UK advertising today is invested in one of a panoply of online formats, with most of this money now traded in real-time through a combination of skilled professionals and technology. Further, the self-serve mechanisms afforded to brands by the likes of Meta and Alphabet have made advertising more accessible than ever before, ushering in what is often referred to as a ‘long tail’ of small and medium-sized enterprises (SMEs) for whom untargeted, mass media is perceived to be less relevant.

Then along came Amazon. Now the world’s largest advertiser in history (with US$16.9bn spent in 2021 alone), Amazon capitalised on what could arguably (if perhaps somewhat cynically) be considered a perfect storm: a captivated audience in need of stuff, now, and an advertising base keen to be seen close to the point of purchase as conventional channels shuttered during the pandemic.

Data from WARC’s sister brand Flywheel Digital – a world leader in online retail advertising – showed that in the weeks the coronavirus outbreak hit, brand investment accelerated across all of Amazon’s ad formats while the rate of growth substantially eased, and in some cases contracted, across Meta and Alphabet properties. Data since show that those short months instigated a step change in the advertising industry which mirrors newly entrenched consumer habits.

A recent WARC survey of more than 1,350 practitioners worldwide found that, while social media and online video properties are set to propel global growth this year (brand discovery is still highest on social, and people still want to be entertained), a new space is coming to the fore. 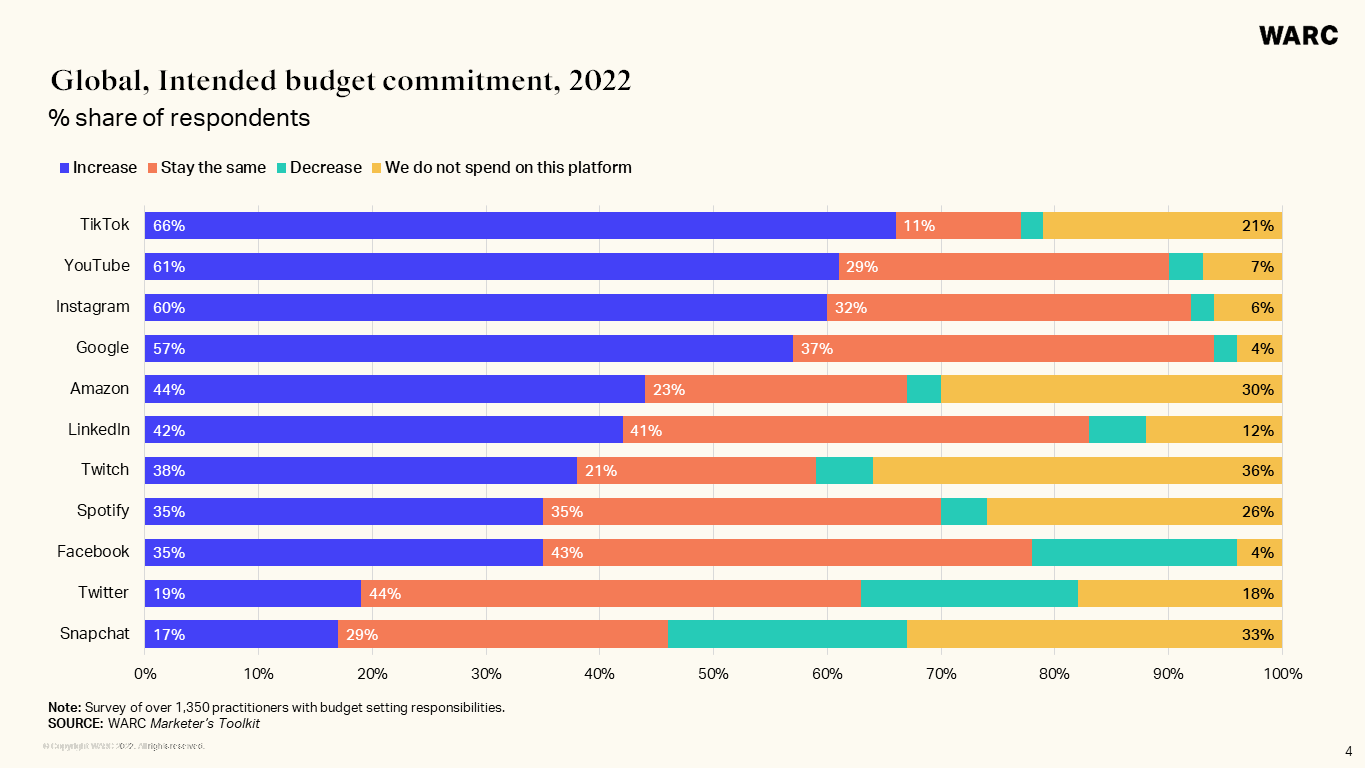 A full 44% of those already committing budgets to Amazon intend to increase spend this year, with a further 23% sustaining previous levels. Only 3% plan to cut spend.

Further, and perhaps most crucially, almost one in three practitioners is not yet advertising on Amazon – demonstrative of the headroom the retailer has. Couple this with new sources of first party data (born from the consumer’s pandemic-induced appetite for online grocery shopping, for example), and it’s clear to see where the next engine of growth may emerge.

Indeed, the aforementioned WARC survey found that half of practitioners plan to increase spend on performance advertising in 2022 – a shift that has been driven by the pandemic. Fewer than one in three intends to invest more in brand building campaigns, down from a rate of two in five in 2021.

What does all of this mean for our industry? More learned voices than mine have long argued against short-termism, and I don’t believe that the establishment of retail media will quell brand-building exercises to the detriment of stalwarts like TV (which itself can benefit from smart, in-spot transactions in future). Indeed, its advent could feasibly make such campaigns more valuable, as household names redouble efforts to cut through a widening field of CPG upstarts on the digital shelf. Time will tell.

For now, though, economic headwinds loom large. The consumer is being stretched further than at any other time since the Second World War, conflict in Europe has stoked market volatility and has exacerbated supply chain pressures, and the prospect of a UK recession cannot be ignored.

Yet at the time of writing, we expect the UK’s ad market to sustain growth throughout the forecast period. Macroeconomic indicators aside, who would bet against its resilience in this new era?