Last week we published revised advertising investment forecasts by market, medium and product category in light of the COVID-19 outbreak.

We have received data from our partners in 96 markets worldwide, scrutinised earnings releases from key media owners during the first three months of 2020, and have assessed investment data at a product vertical level from Nielsen Ad Intel.

We have also factored in the unique monthly data drawn directly from practitioners in WARC’s Global Marketing Index, as we have done since its inception eight years ago. This leads us to believe our latest forecasts are among the most comprehensive of their kind. 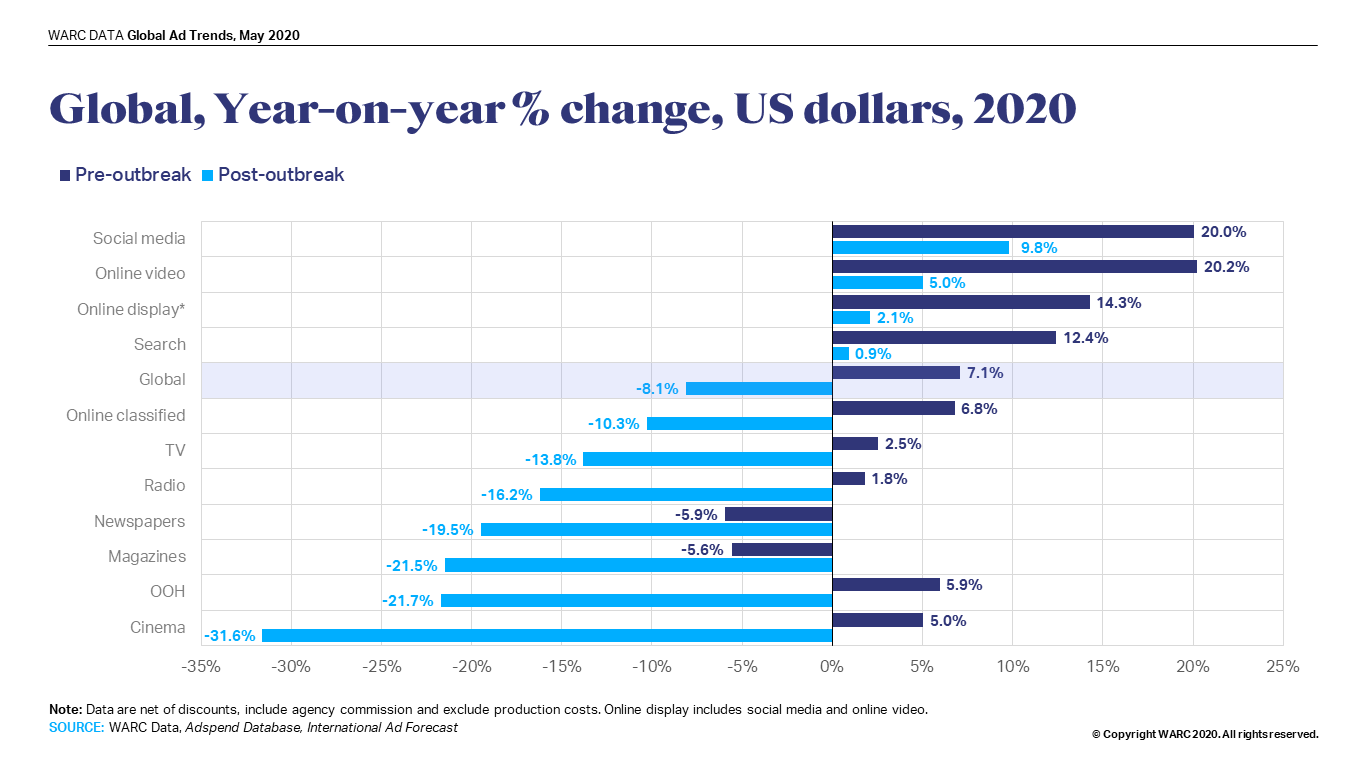 The US accounts for a third of global ad trade when measured in nominal dollars. Here, campaign spending during the 2020 presidential elections is expected to amount to between $10bn–$12bn, up markedly on 2016 cycle as explained in Global Ad Trends by Vincent Letang, EVP, Global Market Intelligence at MAGNA Global.

With this political money excluded, the US market would fall 9.0% this year compared to a forecast 3.5% decline. Removing incremental campaign spending from the global total results in a decline of 10.1%, though this is still softer than 2009.

Online advertising results much better than feared in Q1

A core structural difference is the influence of the Alphabet/Facebook ‘duopoly’, which now accounts for one in three dollars spent on advertising worldwide (compared to less than 5% in 2009).

Current projections from Pivotal Research suggest Alphabet’s ad income will dip on an annual basis for the first time in the second quarter of 2020, then again in the third, before a recovery in the final three months of the year. This would leave Alphabet’s ad growth at 0.6% for 2020, as explained by Michael Levine. Further, Pivotal expects constant growth for Facebook this year, though the full-year rate of +11.4% is far softer than previous rises. 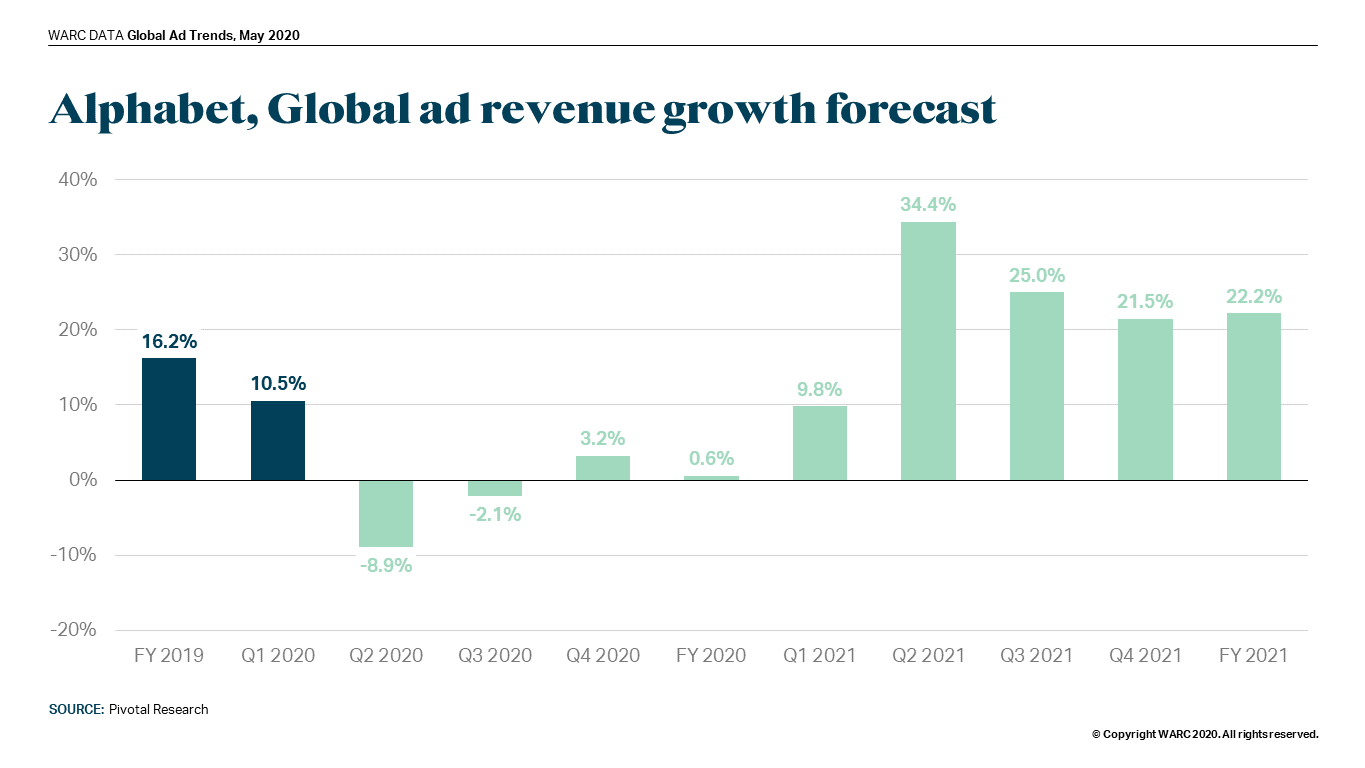 Customers – and brands – have turned to digital retail during pandemic

Aside from these two media owners, we have recorded a surge in brand investment on e-commerce platforms – a trend recently echoed in Ebiquity research – as consumers turn online for their shopping. In the US, e-commerce as a share of retail sales had grown at an average rate of 10 percentage points each year; data show that this jumped by 11 points in just the first eight weeks of 2020.

The rising importance of e-commerce during the outbreak was alluded to in our last Global Ad Trends report in March but, as part of our latest study, Patrick Miller, co-founder of Flywheel Digital, outlines the precise dynamics currently at play in this area.

Amazon is performing particularly well, so too Walmart and Instacart, while in China FMCG sales on Tmall continue to maintain strong growth. The e-commerce sector was nascent in 2009 – Amazon’s income that year was a quarter of what it is today, Tmall was just a few months old, and Walmart’s primary focus was still its brick and mortar outlets. 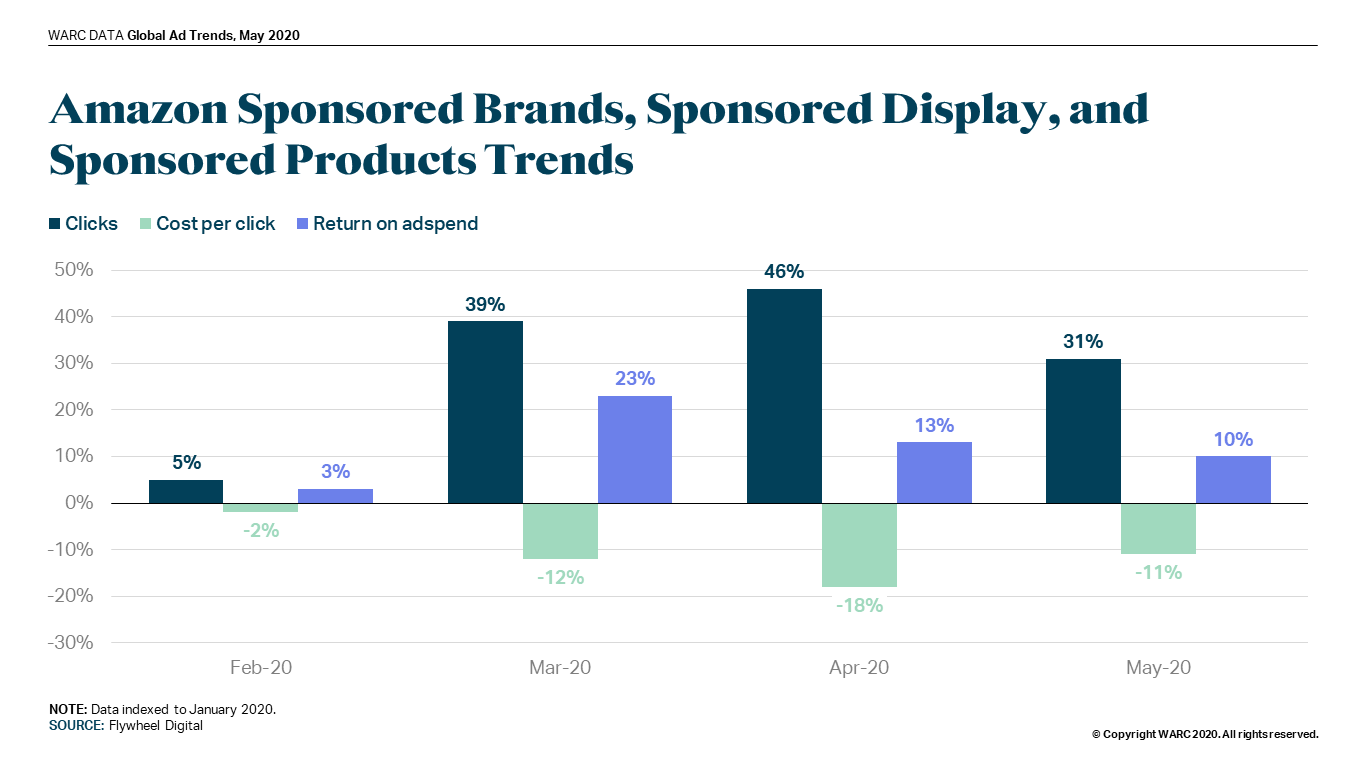 Amazon now accounts for 2.3% of global advertising spend (4.8% of internet spend). When grouped with other e-commerce platforms, aside Alphabet and Facebook, we’re looking at two-fifths of the ad market performing resiliently this year.

And this is before we factor in Asian giants such as Tencent and Alibaba which released first quarter earnings ahead of expectations. Baidu recorded a sharp dip in online ad income during the period, though this is an amplification of a trend that began in the second quarter of 2019 and had been accounted for in our projections.

Second quarter results for the majority of the aforementioned will be dire, and while our models account for this, we will revise our findings in July once the full extent of the damage is known. As Dr. Daniel Knapp, Chief Economist at IAB Europe, notes in Global Ad Trends, forecasts are currently built on quicksand and are in need of constant review as the situation unfolds.

We publish ad investment figures in nominal dollars as this is an approach commonly adopted by other businesses, and because these values are relatable. But they are not the most accurate reflection of market dynamics.

As a companion series, WARC offers ad market data as measured in Purchasing Power Parity (PPP), which removes the distorting effect of exchange rate fluctuations by assessing the buying power of local currency units when spent in their domestic markets.

We also go a step further and remove inflation from these PPP values, offering clients a real view of what is happening in their areas of operation. Here is how the series looks on a global scale: 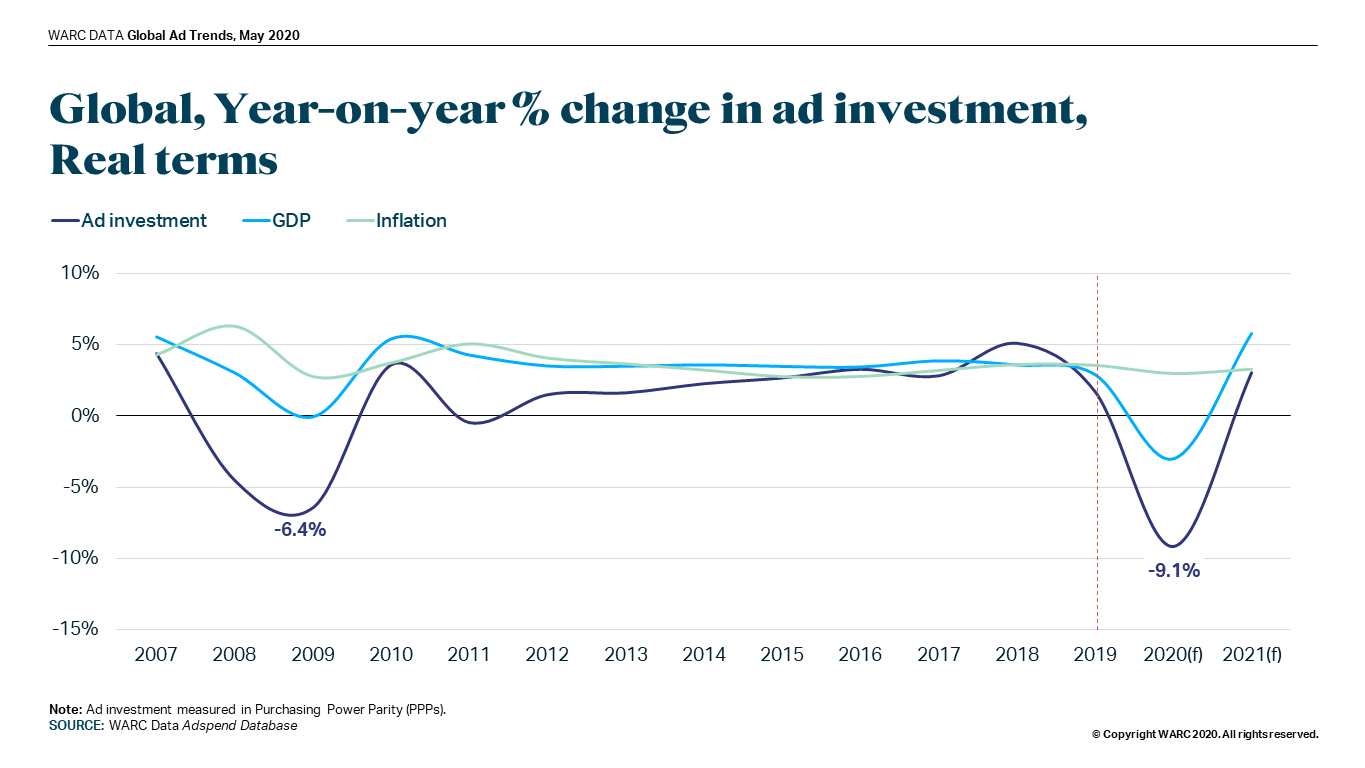 In real terms, the current advertising recession is indeed set to be sharper than that recorded in 2009, with next year’s recovery roughly on a par with that seen in 2010.

We note three distinct phases to the downturn. Firstly, an immediate demand-side induced paralysis for sectors such as travel, leisure and retail, combined with supply-side constraints for consumer packaged goods (CPG) brands. Our current projections show heavy falls in ad investment within the transport & tourism (-31.2%), leisure & entertainment (-28.7%) and retail (-15.2%) sectors.

Second, the recessionary tailwind will exert extreme pressure on the financial services sector (a forecast 18.2% reduction in adspend globally this year) as well as the consumer, whose disposable income is now heavily diminished.

Finally, we are already starting to see an added emphasis on healthcare and wellbeing credentials among brands not normally associated with the field, aside higher spending within the pharmaceutical sector to leverage the shifting consumer mindset.

Whether 2020 will be better or worse than what has gone before is largely moot; the very real pressures media owners, brands and consumers are facing cannot be embodied by a percentage. What matters now is how we cope – as part of our analysis, Brian Wieser, Global President, Business Intelligence at WPP, suggests canny businesses can turn today's negatives into positives.