UK recruitment adspend has now shown year-on-year growth in the last four quarters, and is expected to post continuous growth throughout the forecast period to end-Q3 2016, according to the latest data from the Advertising Association/Warc Expenditure Report.

The Report estimates annual growth in recruitment adspend of 3.9% last year, with total spend of approximately £528m, while a further increase – of 4.8% – is forecast this year. Prior to the last four quarters of growth, the sector had registered a decline in 21 of the previous 23 quarters. 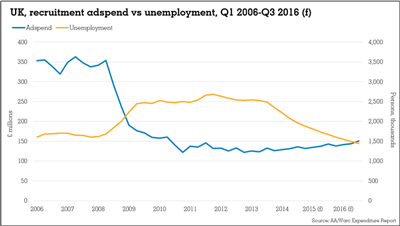 The recession of recent years brought with it a steady decline in recruitment advertising expenditure, from £354m in Q2 2008 to around a third of that in Q4 2010. Over the same period, one million more people were out of work. Hiring was drastically reduced amid corporate belt tightening. On an annual basis, recruitment adspend in 2008 totalled around £1.2bn (including two quarters of negative growth), before eroding to a low of just over £500m in 2013.

The pre-recession peak in recruitment advertising expenditure is unlikely to be matched any time soon, particularly as digital recruitment is becoming cheaper, with many companies advertising via their own websites. However, following the annual growth in the last four quarters, we expect this trend to continue into 2016.

Furthermore, the data show that traditional advertisers are harnessing digital platforms more effectively, while there has also been an emergence of successful new players in the digital recruitment space. Online recruitment ad revenues are expected to account for some 74% of total adspend in this category in 2015, up from a share of around 15% a decade ago. This digital adspend is split between specialists (54%) and newsbrand/magazine brands (46%). 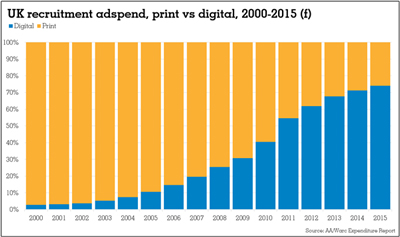 Of the data available, digital B2B magazines are forecast to account for some £83m in recruitment ad revenue this year, regional newsbrands a further £74m, and national newsbrands £36m. This compares to a predicted total of £218m for online specialists: an annual rise of 6.4% from 2014 and an all-time high.