Half way through Cannes Lions week: the weather’s changed and the big conversations are dominated by dogs and dinosaurs.

The weather is now rather different from Day One when, you may recall, the team were getting sunburnt. Delegates awoke on Wednesday morning to an experience all too familiar to the Brits: the golden promise of a summer's day at the beach which quickly became rather rainy and windswept. WARC's UK-based team, however, felt right at home. 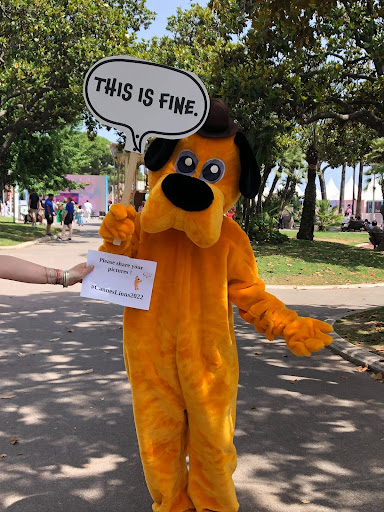 A(nother) dash along the Croisette to a beach session hosted by WPP. But climate protesters have got there first, closely followed by les flics. It’s entertaining chaos for a while but eventually the session is binned and we slope off back to where we came from in the muggy heat.

For much of the week, the town, and particularly the main drag of the Croisette, has witnessed a succession of protesters dressed as ‘this is fine’ dogs, complete with a ‘this is fine’ speech bubble, a play on a meme that could, by some distance, claim to be the most accurate description of our present moment.

WPP was singled out by protesters but it’s not the only group involved in fossil fuel advertising – plenty of others do it. Protests are no longer significant disruptions to the festival proceedings, however. Indeed, there’s a sense among those turned away that it’s a pity to miss some content, but that the protesters do have a valid point.

That point took another animalian shape later in the press room. Typing merrily away, WARC was jolted by a prehistoric screech as a velociraptor ambled in from the balcony and through the press room’s banks of desks. Journalists swarmed to the dinosaur; some even recorded short, screechy interviews with the thing. (Photo courtesy of Wim Demyttenaere, an exceedingly kind Belgian journalist whose fine photo blows WARC’s grainy effort out of the water.) 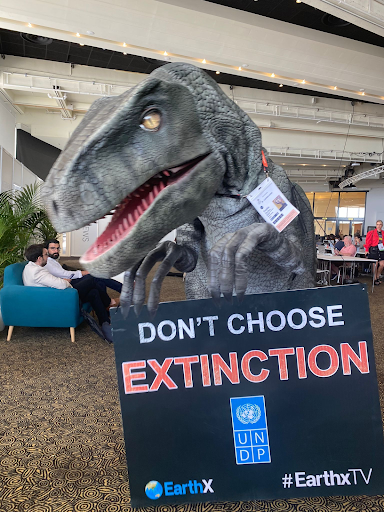 Led by a pair of helpers, the velociraptor was anything but swift, and one can’t help but feel that whoever ended up in the suit had drawn the short straw in the sweltering heat. Yet it soon transpired that this was part of the UN’s ‘Don’t choose extinction’ campaign, one that had seen a similar creature making its way through the UN’s general assembly hall to deliver the same message last November. It’s hot enough without dog or dinosaur suits on so the idea that it is only going to get hotter is a terrifying thought.

Elsewhere in the weird and wonderful venues that make up the festival’s extensive unofficial fringe, WARC believes it has witnessed both the most extraordinary tap (it came from the ceiling) and bathtub (it was genuinely massive) to rival the very strangest things it has seen in its history of covering the festival. Rarely do bathroom fittings shock this lot, but the sheer scale of these things was truly incredible. 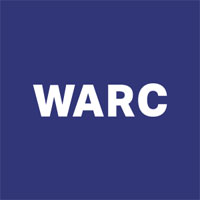