Mobile’s share of total UK internet adspend rose to over a third last year, and mobile accounted for 99% of new online ad money in 2016, according to the latest results from the AA/WARC Expenditure Report, released this week.

Mobile ad expenditure has grown rapidly over the last five years, rising at a compound annual rate of 64.5% (compared to a total UK ad market CAGR of 5.9%). Such growth propelled the value of the mobile ad market to a new high of £3.9bn in 2016, with 86% of this total being generated since 2012.

Further, mobile has contributed an average 77% towards total growth in UK advertising expenditure over the last five years. In 2016, were mobile removed from the total, UK adspend would have fallen 2.5% year-on-year, or £453m.

During the final quarter of 2016, mobile adspend leapt 41% to a record-high £1.2bn, the first time spend had topped £1bn in a single quarter. Both display and search components recorded their highest levels of ad expenditure since records began, and further growth is on the horizon.

We believe that mobile ad expenditure will rise by approximately 30% this year and a further 21% in 2018, and expect that all formats will record increased investment over this period. On the current trajectory, mobile will account for over half of total internet advertising spend next year. 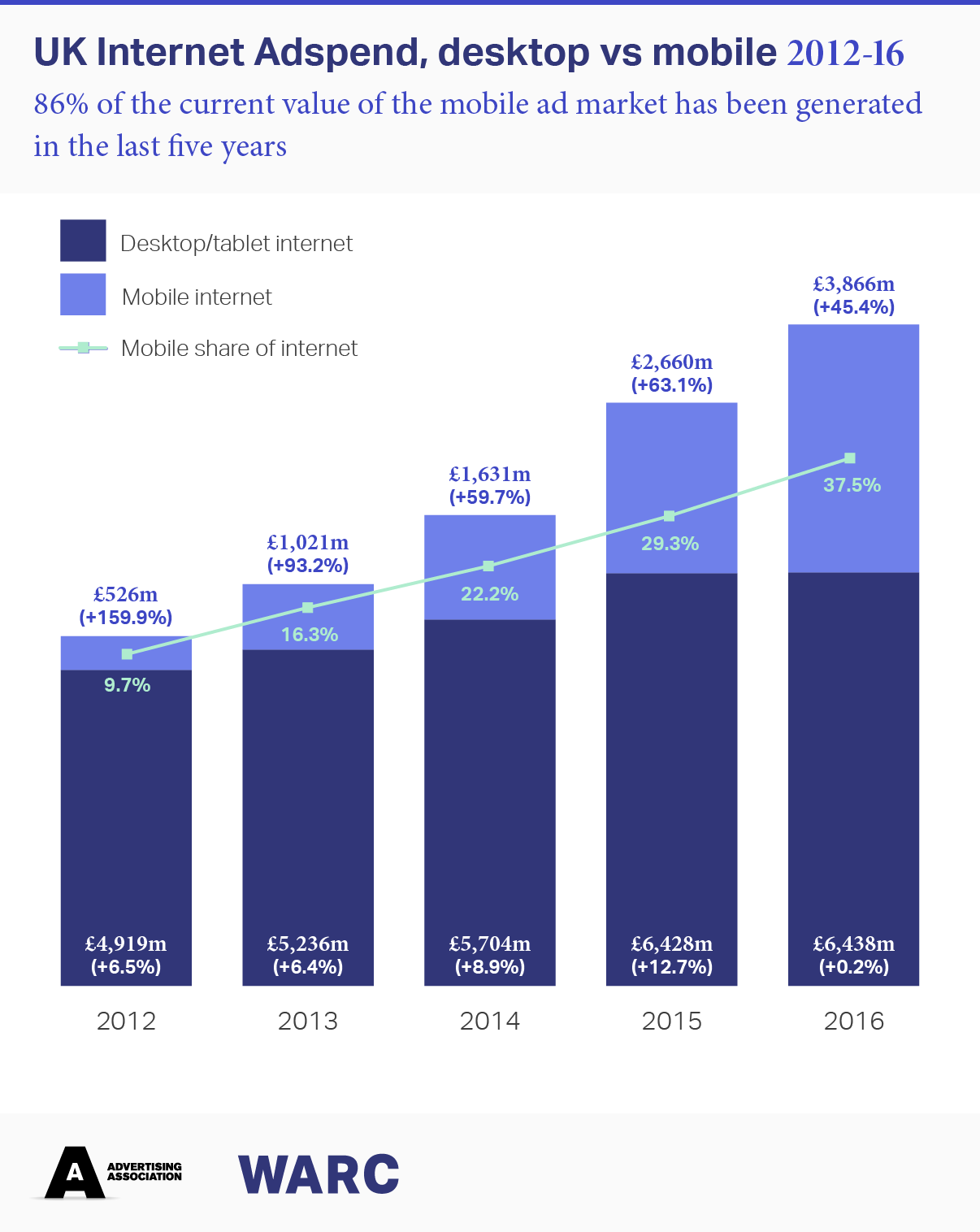 Mobile advertising spend data included in the AA/WARC Expenditure Report are provided by the Internet Advertising Bureau (IAB), on whose behalf PricewaterhouseCoopers (PwC) conducts a biannual survey of online businesses.

The IAB’s definition of internet advertising, cited throughout, incorporates all online advertising revenues, be they from newsbrand or magazine brand websites, radio station websites, or broadcaster VoD platforms. However, of the money spent on mobile advertising last year, only around 10% was assigned to such websites.

The £3.9bn spent on mobile ads in 2016 was split almost evenly between search and display. Within the latter grouping, spend on mobile video ads more than doubled to £693 million, making it the fastest growing online ad format last year, according to IAB data. Further, social media adspend on mobile – some of which is included in the aforementioned video total – grew 54% on a like-for-like basis in 2016.

Mobile has been the main driver of headline internet growth over recent years, accounting for over half of the new online ad money each year since 2013. Of the £1.2bn entering the online ad market last year, over 99% came from mobile. 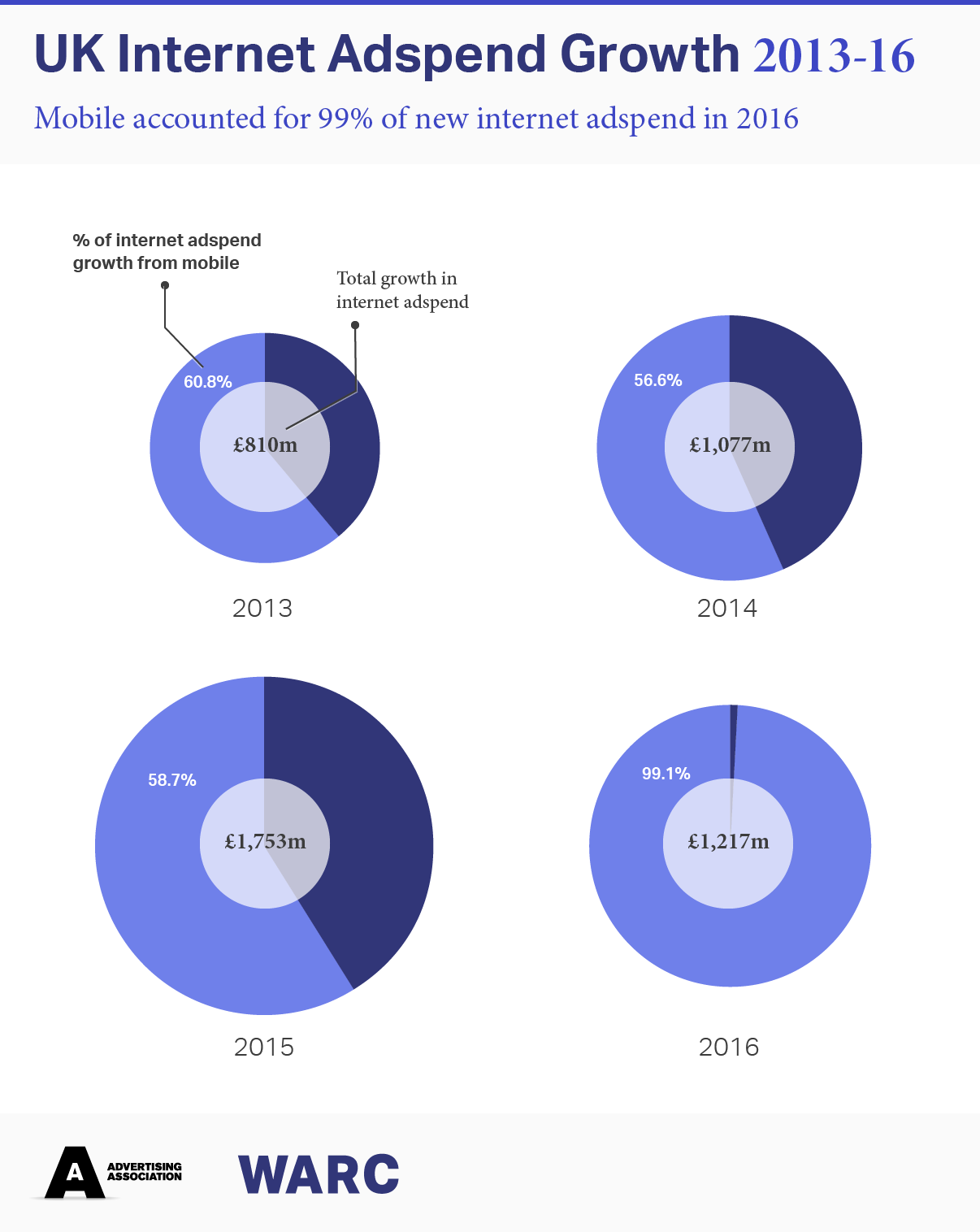 “The year on year growth of 17.3% - which takes digital ad spend over the £10bn mark - is the highest we’ve seen for nearly a decade. Reaching this threshold has only been made possible by brands breaking the mould, trying innovative formats and making the most of video to reach and amaze people. The IAB/ PwC Digital Adspend study has also clearly shown that despite some of the complexities of digital advertising, advertisers are asserting control and choice over what is seen, and who is seeing it. The biggest nod to this is that 74% of all display advertising is being traded directly or programmatically by private marketplaces with premium publishers (£2.8bn) rather than being bought at scale on open exchanges.

"Mobile video was last year’s real winner – up 103% year on year. This supports the trend of increasing smartphone usage throughout consumers’ day but also allows brands to really innovate the most with short, vertical video formats that are built with mobile in mind.”