The CASSIES (Canadian Advertising Success Stories) are now ready for warc.com subscribers to read! The CASSIES recognise and reward the business effectiveness of Canadian advertising. There were 38 case studies in total, which Warc subscribers can browse here . Always, the feminine hygiene brand’s #LikeAGirl campaign and “Groceries Not Guns”, a campaign for Moms Demand Action for Gun Sense in the US, shared the Grand Prix prize. But if you’ve only got time to read a few I highly recommend the following.

Mark’s a shopping mall in Toronto, Canada, wanted to boost post-holiday sales. The brand led with an innovative outdoor campaign that featured the first ever digital transit ads that were informed by a real-time Weather Network feed which enabled Mark’s to determine the sales offering for consumers. So, as the temperature dropped, so did the store’s discounts on winter apparel. The results? 18M earned media impressions, along with a 21% increase in comp sales YOY. 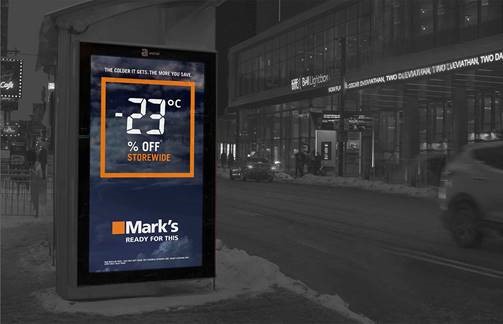 McCain, the food brand, needed to overcome negative perceptions towards frozen food processing and the tendency to limit frozen foods in favour of fresh or gourmet ingredients. This campaign wanted to elevate the experience of eating its Superfries variant and bring new excitement and appeal to the brand as well as link it to new consumption occasions. An influencer-led strategy included partnerships with celebrity chefs, bloggers and vloggers. #Modifry had over 500,000 social engagements on Facebook and Twitter, while the 7% growth (versus the year before) was double its target.

Jackson-Triggs: We’ve got a wine for that

Jackson-Triggs, a Canadian wine brand, wanted to reinvigorate interest in the brand, attract new customers and increase sales. It did this by repositioning as a lifestyle brand and by emphasising ‘moment’ marketing with the message, whatever you’re doing, “we’ve got a wine for that”. In the first year, sales increased 17%, with a YOY increase following; as of May 2015 sales continue to grow 16% with research showing that across all loyalty metrics it was the top performing brand amongst the competition. 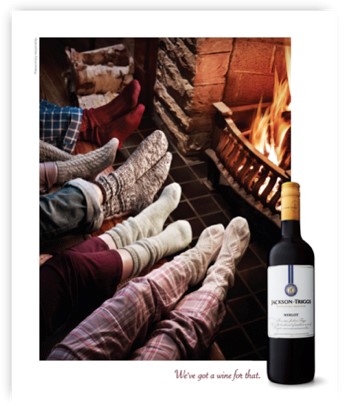 Grape Nuts, a 119 year old cereal brand, was experiencing a decline in sales and was perceived as old-fashioned. But the discovery of a brand truth - in 1953, Sir Edmund Hillary, the first man to conquer Mount Everest, did so “fuelled by sheer determination and a pocketful of Grape-Nuts” inspired the legacy brand’s repositioning strategy. Grape Nuts repositioned itself as a healthy lifestyle brand that could help consumers conquer their own “mountain” goals. The fully integrated campaign included TV, online video, Facebook contest, health magazines, events, experiential and product sampling. Grape-Nuts grew by +3% in $volume in a declining category, while market share went from 0.6 to 0.8, revenue rose 8% and penetration increased by one point. 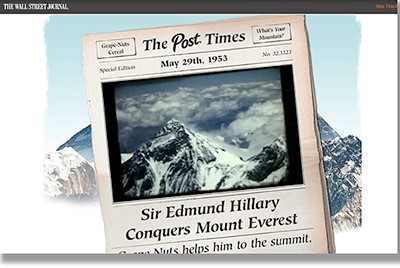 Becel, the margarine brand owned by Unilever, was operating in a declining category, and struggling with declining sales and market share. To regain share and drive consumption, Becel focused on driving new usage occasions beyond spreading. Thus baking became the new focus - new recipe ideas were introduced on TV, print and via a variety of strategic partnerships as well as a YouTube video featuring how-to recipe content. Results: in the first 12 weeks, Becel gained +92 basis points in $ share.

Hot on the heels of its Skip Starbucks Saturday campaign, Moms Demand Action for Guns Sense in America (MDA), turned its attention to retailers – to get them to ban guns from their stores. MDA focused on the absurd fact that skateboards and ice cream are often banned in-store, while guns were not. MDA encouraged people to boycott these stores and succeeded in changing the policies of stores like Starbucks and Kroger. 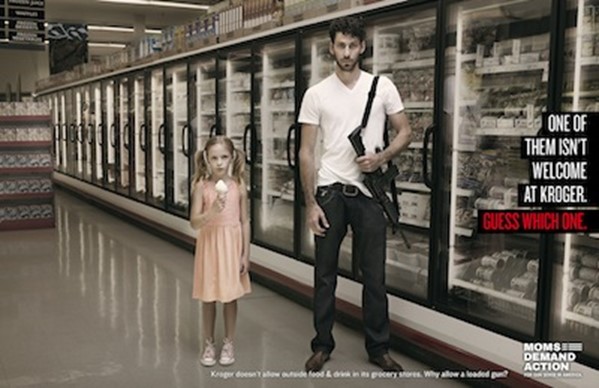 Fix Auto, the largest network of automotive collision repair facilities in Canada, embarked upon an awareness raising campaign that relied upon a memorable mnemonic device. Auto collisions often lead to the “f” bomb utterance and so Fix Auto created TV and video ads that centred on the phrase “Fffffix Auto” which encouraged the idea that this was “the first word that should come to mind after an accident.” The brand also deployed in-game virtual billboards within Electronic Arts’ and ‘Need for Speed.’ YOY sales grew +7%, and the brand saw a 137% increase in awareness, putting Fix Auto in first place nationally.

Always, the feminine hygiene brand, shifted from a functional to emotional positioning by promoting female empowerment. The brand conducted a social experiment which asked people to unpick what the phrase ‘like a girl’ signifies. The message was shared via social media, long-form online video and key influencer outreach. The #LikeAGirl hashtag became a call to action. The purposeful stance worked: brand share increased +1.4pts, to 59.6% and the video became the #1 viral video in the world with 85 million views globally.

SVEDKA Vodka: Building a brand, one cocktail at a time

This case study, for SVEDKA, the vodka brand, is interesting due to its use of media. The media campaign led with high profile and unique outdoor locations to reach millennials in the US. The OOH campaign ran in 16 different states. Supporting media consisted of pre-roll video, rich-media and standard banner ads, and vokens, as well several online strategic partnerships with millennial-relevant properties such as Buzzfeed, Clear Channel and Break. Brand awareness amongst target market grew from 6% to 98% and SVEDKA became the 8th largest spirits brand in the US selling over four million cases.

Doritos, the potato chip brand, embarked up an engagement campaign to create interest among millennials for the relaunch of its time-limited Ketchup flavour crisps in Canada. A mobile game/competition was at the heart of this digital only campaign. Facebook, twitter and a partnership with buzzfeed provided the support. Sales increased 3.5 times versus 2014 and lifted the entire brand by 14.4%.

Well done to all the winners! And a reminder that There were 38 case studies in total, which Warc subscribers can browse the case studies here .