The consumables sector is set to account for the greatest category share of UK advertising spend in 2015, according to the latest data from the AA/Warc Expenditure Report. The sector – comprising cosmetics & toiletries, food, drink, household FMCG, pharmaceuticals and tobacco – should take around 23% of total adspend, with ad revenues in excess of £2.4bn. This follows anticipated growth of 1.5% for the category in 2015, following a rise of 0.6% last year.

The category data included within the Expenditure Report is sourced from Nielsen, the market research firm. The 26 major product categories measured by Nielsen – Nielsen's data collection methodology is detailed here – are grouped into seven major sectors by the Advertising Association and Warc, according to the table below. 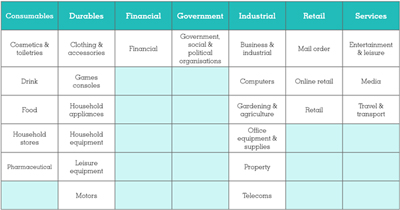 Within consumables, food is the largest component category, with adspend around the £1bn mark, followed by cosmetics & toiletries, then drink. 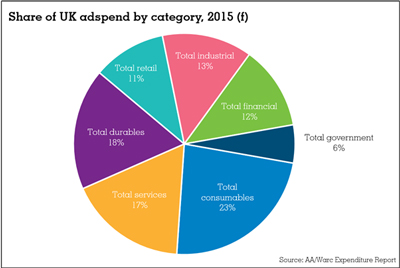 Annual adspend for durables has grown the most since 2009 – by some £220m according to Nielsen – and the category is expected to be the second-largest in 2015 on a share of 18%. We forecast adspend of £1.9bn on durables in 2015, a rise of 1.4% from last year. Ad revenues for motors, in excess of £600m, add the most value to this category. Both consumables and durables are the only sectors expected to post consecutive years of growth in adspend between 2014/15.

Advertising expenditure for services this year, including leisure and entertainment, media, and travel and transport, is forecast to rise 1.0% annually to approximately £1.8bn, giving the category the third-largest category. 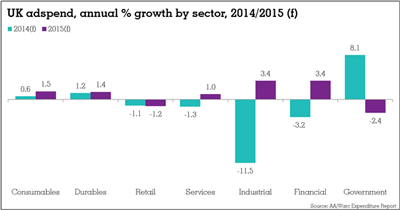 Industrial products, from property to computers, are forecast to see a collective growth in adspend this year of 3.4% to around £1.4bn, which follows expectations of a steep decline of 11.5% in 2014. Ad revenues for telecoms account for the greatest share of the industrial category at around two-thirds of the total.

Financial services are also forecast to see a rise in adspend this year – at some 3.4% – but again this comes off the back of an expected decrease last year (-3.2%). We value the financial ad industry 's adspend at £1.3bn this year, around £140m higher than in 2009. Such growth has seen it overtake retail in the last six years, a category which will have seen revenues decline by a forecast £150m over the same period. Adspend on retail products is still forecast to reach in excess of £1bn this year, though this marks a 1.4% fall in spending from 2014, the fifth consecutive year of annual decrease.

Finally, advertising spend by the government (including charity and departmental adspend) is forecast to amount to aproximately £590m this year, which trails the £602m expected for 2014. Under the current rules, government departments cannot spend on advertising after 30th March before a general election, which goes some way to explaining the forecast annual decrease this year. The 2014 total is, interestingly, £130m less than in 2009, the unrestricted year preceding the last general election.