Another month, another set of learnings. We recently published over 40 APG Creative Strategy case studies on warc.com. The APG is the foremost and longest-established organisation representing the interests of account planners and other communications strategists. These awards celebrate the 'lightbulb' moment. I found it extremely difficult to showcase just a few, but here's a brief synopsis of the brands that I think deserve a special mention. Warc subscribers can access all 41 winners of the 2013 APG Creative Strategy Awards in association with Google.

British Airways: Thank you for not flying
British Airways, the UK airline, responded to the predicted mass exodus from the UK during the London 2012 Olympic and Paralympic Games by adopting a bold, counter-intuitive (but ultimately successful) strategy. At first glance the "Don't Fly. Support Team GB" tactic could be seen as commercial suicide. But, shrewdly, the campaign ran during a period of minimal risk to the business. A multimedia campaign included a film of a Boeing 777 not flying, but taxiing through London to Stratford, and set to The Clash's "London Calling" soundtrack. Another highlight was innovative use of outdoor/ambient media involving the image of Jessica Ennis, the UK heptathlete, which could be seen by those touching down at Heathrow airport. Superb. 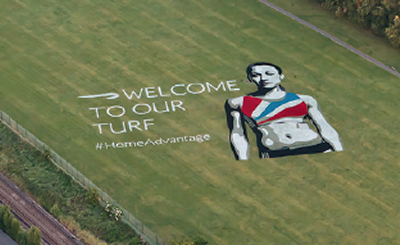 EXIT Deutschland: The Trojan t-shirt
EXIT-Deutschland, an anti-right-wing organisation in Germany, used design/fashion to drive home its anti-Nazi message. The organisation distributed specially designed t-shirts at Europe's biggest right-wing rock festival, but these were special t-shirts that, when washed, contained a covert message. The original slogan: "Hardcore Rebels – National and Free" changed when washed to: "If your T-shirt can do it, so can you. We can help you to get free of right-wing extremism. EXIT", and included links to contact details. Genius.

Depaul UK: Don't raise money, make money
"We weren't asking people to care: we were asking people to buy something that they'd need in order to move house; and we took the opportunity to make them care". Depaul UK, a charity that helps young homeless people, developed an innovative fundraising model for the not-for-profit sector by founding the Depaul Box Company. Aimed at house-movers, the charity found a way to be useful/functional, while driving home the homeless message. The boxes were the canvas for storytelling, reminding people that by buying Depaul boxes they weren't just solving the logistics of moving house, they were contributing to a worthy cause in the process.

Women's Aid: The power of starting in a different place
Innovative technology was at the heart of this campaign for Women's Aid, the UK charity that provides support to victims of domestic abuse. During the course of the 65 second cinema spot, two scenarios play out simultaneously. Using 3D glasses, through one eye the viewer watches a familiar story of a woman preparing dinner. Through the other they see exactly the same scene but with one crucial difference: the harrowing presence of an abusive husband. This confronted the viewer with two different realities - depending on which eye they chose to view the story in. Quite literally provoking the thought: would you turn a blind eye?

Paddy Power: Balls, banter and bets
Paddy Power, the Irish bookmaker, repositioned itself as a brand that would participate in the everyday culture that surrounds sport, a stance considered more engaging than a mere 'gambling' brand. With its new positioning as the brand that would listen to sports fans, one that would give voice to the punter, Facebook and Twitter became the lifeblood of the 'We Hear You' strategy. Support came from outdoor and ambient media, including 'skyvertising'. This mischievous campaign helped the brand transcend category norms. 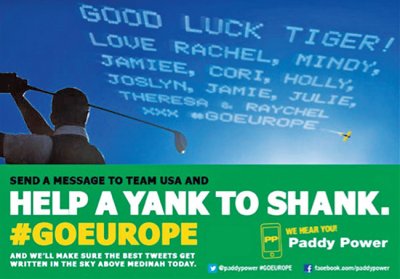 St John Ambulance: The art of action and the science of scaring
140,000 Britons die every year due to a lack of First Aid - the same number that die from cancer. This statistical similarity led St John Ambulance, the First Aid charity, to reposition from a traditional, donation-based campaign to one that would inspire the uptake of life-saving First Aid skills. A TV ad tells the story of a man's long battle with - and recovery from - cancer. But the story ends tragically when the cancer survivor dies from choking, watched helplessly by his loved ones. This powerful utilisation of shock tactics led to 163% increase in downloads of educational tools, 1,565% increase in downloads of the mobile app, and succeeded in making First Aid a headline issue.

Fire Safety: Creating a new behavioural association
The Department for Communities and Local Government, aimed to reduce the number of deaths in domestic fires across England. A good illustration of behavioural economics at work, the campaign built a strong behavioural link between something people already do (changing their clocks) and the desired action (testing their smoke alarms). Associating (or owning) the twice yearly "clock change" dates with testing one's fire alarm, acts as a reminder for potentially life-saving behaviour that doesn't rely entirely on marketing expenditure.

Hellmann's recipe receipt
Hellmann's, the mayonnaise brand demonstrates how a brand can build usage frequency by providing inspiration for recipes. Partnerships with retailers in Brazil enabled the brand to provide shoppers with recipe suggestions which were supplied via a new advertising medium: the humble till receipt. In-store marketing was key to this campaign.

Wrigley's Extra: Flavours of Life – the favourite story of a generation
Wrigley's, the chewing gum brand, connected with Chinese youth by repositioning Wrigley's gum from a rational/functional product, to an emotive one. Storytelling formed the basis of this campaign, telling an epic love story that was voted the favourite campaign of a generation and viewed half a billion times online, raising consumption of Wrigley's Extra by 44%.

Air New Zealand: The Kiwi Sceptics – planning for the era of branded content
"We won't be able to just buy an audience; we will need to capture their attention through earned media". Air New Zealand, the airline, created an online reality TV series called The Kiwi Sceptics, which documented the journey of Air New Zealand's attempts to convert four Australians into New Zealand advocates. A risky strategy, but a successful one too.

Band-Aid: Brand Magic Vision augmented reality app
Band-Aid, the plaster brand, is a healthcare product, right? This case study is interesting because it explains how a shift in thinking helped the brand achieve category cross-over by finding relevance in the entertainment category.