AMV BBDO was the top-awarded agency at this year's Warc Prize for Social Strategy, taking Golds for #YouDrive, a Twitter-focused integrated campaign for car company Mercedes-Benz, and Mariachi, a tongue-in-cheek campaign for snack brand Dorito that sent a group of Mexican musicians on a "Facebook tour". The latter campaign also took the $5,000 Grand Prix, the giant cheque for which was picked up by Tom White, AMV's board account planner.

Speaking after the awards, White revealed the big strategic insight behind the campaign. In order to redefine Doritos as a brand for everyone, not just its young core customer, the agency based its work around something (almost) everyone loves: cheesy cover versions. And these songs, played by the mariachis in fans' homes and streamed on Facebook, helped drive a 23% increase in sales.

"Our philosophy with this campaign was that we wanted to create conversations - and you can't have conversations without content," he said. "The mariachi band became our engine room for content - we took them around the country to different people's parties, young and old, and that fuelled content that we could distribute chiefly through social media, and really get conversations going."

In other words, this was a highly effective social strategy, in which social media activity demonstrably had an impact on the client's brand and bottom line. Precisely the sort of thing we were aiming to reward by setting up the prize in the first place. 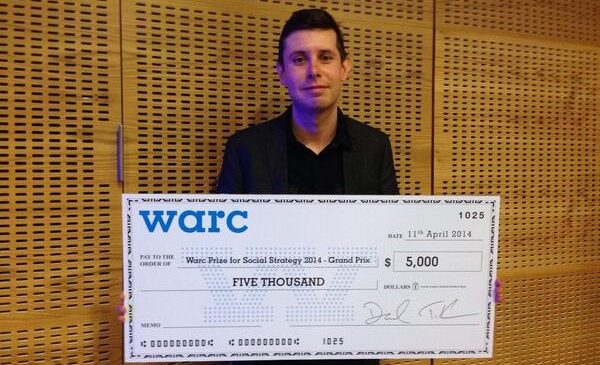 White added: "We're thrilled to have won the prize - personally as someone who has drawn on Warc a lot for information and resources, it's nice to finally feel that I'm giving something back!"

Subscribers can read all of this year's social prize case studies here. Hopefully they'll provide some inspiration for next year's entrants!