The start of the year is predictions time. Here at Warc we've launched our Toolkit 2013 report on the challenges of the year ahead. We've also run a slew of forward-looking pieces from around the industry.

One set of forecasts I keep an eye on each year is Deloitte's TMT (technology, media, telecoms) predictions. The report, out this week, is based on the company's own research, plus input from all over the media industry, and always makes for an interesting (and sometimes counter-intuitive) read.

This year's predictions include a reminder of the power of the PC. In the midst of all the hype around smartphones and tablets, it argues, it can be forgotten just how much internet usage still takes place on the humble personal computer or laptop.

Earlier this week I attended a preview session of the report, and this chart, from the US, sparked a fair amount of discussion among the media executives and analysts in attendance. 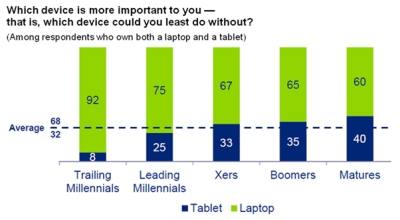 We intuitively think of tablets as being the choice of young early adopters. Instead, the consumers that seem to value tablets the most are older – 'boomers' (55 to 64) and 'matures' (65-plus) lead the field in terms of tablet preference (among consumers who own both). Among the youngest groups ('trailing millennials' are in the 18-24 category), laptops are more highly prized.

(It is also worth noting that, unlike smartphone ownership, tablet penetration is relatively flat across all age groups.)

A number of points were made around this chart:

There's been talk of a 'post-PC era' in electronics. But it looks like there's life in the humble laptop yet.