Coca-Cola’s new brand platform, Real Magic, a global campaign that will need to tread carefully to resonate around the world – Faris Yakob takes us inside the tensions of designing strategy on a worldwide scale that will play locally. 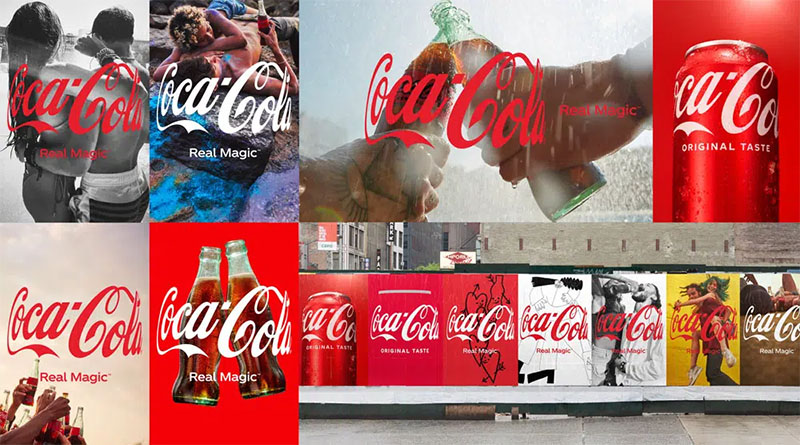 Examples of the new platform in action

In October 2021 Coca-Cola debuted their first new global brand campaign in five years. In an appeal to gamers (as I discussed in a previous column this is ‘most people’, or two thirds of all adults and more of the young) the launch spot shows famous gamers coming together over a Coke in a virtual game world. Ignoring for the moment that this isn’t very true to the culture of competitive esports (and how similar the concept is to the highly lauded spin on Grand Theft Auto they did in 2006 that was simply called “Video Game”) the spot announced the new global tagline “Real Magic”. The announcement made clear however that it is more than a tagline, it’s a global brand ‘platform’ and more:

“Real Magic is not simply a tagline or a one-off campaign: It is a long-term brand philosophy and belief that will drive and guide marketing and communications across the Coca-Cola Trademark” said Manolo Arroyo, who was appointed Chief Marketing Officer for The Coca-Cola Company in 2020. As he went on to point out, this is a succinct tension proposition: “The Real Magic philosophy is rooted in the belief that dichotomies can make the world a more interesting place – a world of extraordinary people, unexpected opportunities and wonderful moments. At the same time, it captures the essence of Coca-Cola itself: a real taste that is indescribable, unique, a touch of real magic.”

Managing the complex tensions of modern life and making them relevant to the world’s favorite *insert here* (fizzy beverage) is part of the challenge of modern marketing and it is significantly increased when trying to create an idea that resonates with a global audience.

The previous ‘brand platform’ “Taste the Feeling” rolled out to anchor the product experience back into the advertising following a long period of highly awarded brand driven content work from a roster of creative partners that coincided with some long term structural declines in soft drink consumption. The imagery was used globally, we saw it everywhere, but even something as simple as those three words don’t really translate universally – in Spanish it was translated as “Siente el Sabor” which means ‘feel the taste’, the same three words conveying something different.

We’ve heard stories from agencies all over who have often bemoaned the global brand mandates, often coming from headquarters in the USA, to use the approved tagline in India, or South East Asia, even though they made no sense and didn't really translate.

Global branding is tricky. There is a famous but apocryphal anecdote about the problems the Chevy Nova faced upon launching in South America because ‘no va’ means ‘no go’ in Spanish. This isn’t true (and isn’t really Spanish) but the popularity of the anecdote is attributable to the issues inherent in trying to manage a singular brand globally. Back in the mists of time, nobody did much multi-market work but the same waves of globalization and consolidation that led to, and in fact drove the formation of, the advertising holding companies, plus the desire to drive efficiencies and cut spend on “non working media” (also known as agency and production costs) mean that today a significant portion of work is done for many markets, or even global roll-out.

There are obvious problems with running the same ads around the world. There are a lot of different languages and anyone who has dealt with translation knows that it’s a tricky art to capture the meaning rather than just Google Translate each word, brand guidelines notwithstanding.

Beyond language, of course, there are innumerable different cultures with different mores, myths, media and memes, all of which are crucial tools in any type of communication. Locally sourced culturally insightful communication is optimal, but global organizations often can’t justify the budgets required to do farm-to-table advertising in every market. This leads to confusing hybrid situations, where some decisions are made (and some budgets held) locally and some are made centrally.

When I worked on Sony at Naked we worked with the UK team with Fallon London, and with the European teams that Fallon also made creative assets for. Every six months we would meet with the marketing managers from across Europe and ask them if they liked the centrally produced work. They would always reply that of course they did but they couldn’t run it in their market, for lots of good reasons.

It’s hard to make something impactful that can be easily understood by everyone. There are a couple of options, propositionally. One way is to elevate to some extremely universal, shared aspect of humanity, and then pull it back down to a local level. According to the anthropologist Clifford Geertz, author of The Interpretation of Cultures, “Understanding a people's culture exposes their normalness without reducing their particularity.” Coke did this with happiness for years and is now trying it with the magic of the everyday.

This is the first thing former BBH global planning chief Nick Kendall recommends in his excellent paper “How to build an effective global brand strategy”, which itself pulls from the classic 2008 IPA Grand Prix winning paper on Jonnie Walker’s appropriately long running ‘Keep Walking’ global positioning. The problem with universal truths, as he goes on to point out, is that they are inherently generic, and tend to operate at the category rather than brand level. Such universality needs to be anchored into a deep brand truth, derived from product or provenance. His next tip is to give it time, because global roll-outs take years and thus will take even more years to show their true impact. The big global brand idea becomes a creative management tool, to inspire and bring people together, reading from the same hymn sheet.

An alternative route is to make the brand fuzzy, which is to say that truly global brands, Hello Kitty or Nike for example, are often undefined or defined loosely: they exploit vague meaning structures to encourage polysemous readings, which allows them to mean different things to different people in different contexts.

There is an inevitable tension in the local implementation of global brands and corporate politics reflect that. As a new CMO appears the existing regime has begun to tire people, so a distributed marketing organization will find itself being rolled up into a centrally controlled operation, only to swing back the other way about, oh, five years later let’s say.

Efficiency endlessly competes with effectiveness, because it’s cheaper to run the same ad everywhere but that is almost always going to be less deep and powerful than something produced by the local market that lives that culture. The pendulum will always swing backwards and forwards and good agencies understand how to sail by how the wind is blowing. The most important thing to remember is to never say ‘glocal’.