As more countries begin to ease their Covid-19 restrictions, there’s one inevitable question that everyone is asking: what does the “New Normal” look like?

Clearly, we can’t just assume that behaviours newly acquired or significantly boosted during an unprecedented crisis will automatically continue afterwards. Yes, media consumption saw a huge boost, exercise moved indoors and shopping in many categories went almost exclusively online, but consumers were in uncharted territory – often being required to do things out of necessity rather than choice.

Equally, where people say they intend to carry on with behaviours after the outbreak, is a “New Normal” resolution any more certain than a New Year’s one?

With those caveats in place, we’ve been mining our global data to look for signs of what’s coming across the 17 countries that we’ve surveyed multiple times throughout March, April and May. We’ve looked in particular at people who are no longer concerned about the coronavirus situation in their country; we find a particular concentration of these individuals in China, Australia, New Zealand and Germany – countries which were either hit early, which escaped sizable outbreaks, or which have outperformed their local region.

Across these four countries, consumers have become progressively less concerned about their national situation, and are now much more worried about the global outlook. Hence, looking at intentions of “Unconcerned” individuals can give us a sense of what we’ll see in other countries as they too move down the route to recovery. 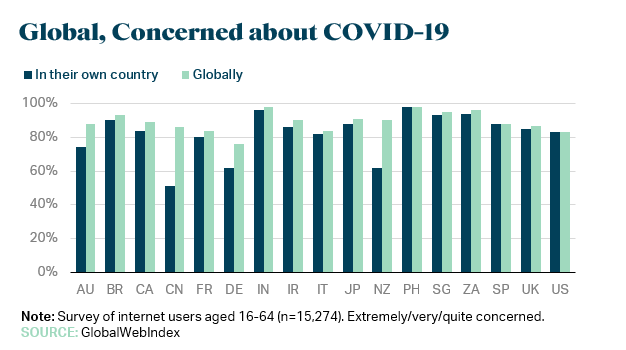 One factor that remains consistent across all countries and audiences is that a desire for safety will shape future behaviours, at least in the short- and medium-term. Whether it’s the confidence to start booking vacations again, the speed with which they will return to public locations / shops or the measures they want organisations to implement, so much of the consumer’s mindset is currently engineered towards a need to feel safe.

Beyond this, though, we do see meaningful differences between “Concerned” and “Unconcerned” individuals. Take travel as an example; vacations emerge as one of the top priorities for all groups in terms of post-outbreak purchases, but while Concerned individuals are more likely to look at cost-cutting changes (budget airlines, cheaper vacations, using promotions, fewer vacations), Unconcerned people instead focus more on adapting to the situation (taking staycations, having more vacations in their own country). It would appear that consumers further on the road to recovery are more aware of the pragmatic approach needed to get back to some sense of normality. 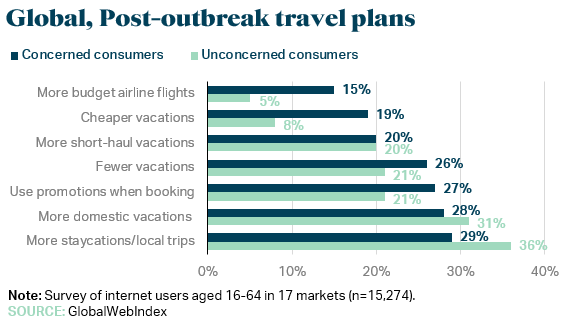 A strong correlation between cost and concern emerges in many other sectors too. Concerned individuals are most likely to place importance on buying from brands/businesses with the cheapest prices. In contrast, Unconcerned people look more towards brands/businesses they’ve shopped from previously (hence, loyalty outranks price). Similarly, Concerned people are most likely to think they will cut their out-of-home leisure spend; as countries recover, the appetite for “normality” strengthens and people are less likely to expect (or want) changes to their previous behaviours.

We see the same for media consumption. As stay-at-home orders were issued across the world, national populations suddenly found themselves spending large, unplanned periods of additional time in their homes. One immediate result was a boom in media consumption; since then, a key question has been whether these shifts will endure into the recovery phase and beyond. Our research shows big differences between the two audiences; in short, the more concerned you are about the coronavirus situation in your country, the more you expect to carry on with the additional media activities you’ve taken on. This begins to change as concern eases, showing that people entering/progressing along the recovery stage won’t keep up with all of their original plans. This is particularly pronounced for podcasts, radio, magazines, broadcast TV, and video creation.

Interestingly, there are places where we see no difference between the two audiences. It’s here where we can begin to identify permanent changes to behaviour that will endure beyond the recovery phase. This is true for things like cooking, family socializing, hobbies and spending more time using online learning platforms for children – all things that consumers wouldn’t necessarily have been able to make time for prior to “lockdown”.

E-commerce is a clear example of this trend too; both audiences are as likely to say they will buy more things online for home delivery. Break this down a little, and the expectation of doing more online shopping hits 45% among pre-existing e-commerce purchasers and 33% among those who weren’t purchasing online regularly prior to the outbreak. So, the biggest potential boost is for those people who were already online shoppers, but the increase among the new converts is still sizeable.

Expectations around online shopping are also remarkably consistent across both audiences; they want free delivery, free returns and reliable delivery. In fact, reliability considerably out-ranks speed; consumers would rather have certainty than instant delivery.

This need for certainty brings us back to theme of safety and reassurance – something which is influencing so many of the trends we’re seeing at the moment. So, while it might be difficult to predict the exact changes we’ll see over the coming months and to know where expressed sentiment will convert into actual behaviours, we can be sure that consumers will be driven heavily by this sentiment. The “New Normal” won’t always be as different as some might have expected, but it’s a landscape in which the consumer will prioritise feeling safe above all else. 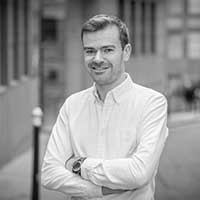