Rebecca Newman, Research Executive at MEC, explains how, using Media Z, MEC looked at audience attitudes towards the 2014 Winter Games in Sochi and towards the brands that sponsored them.

The 2014 Winter Olympics were held in Sochi, Russia over 16 days from the 7th to 23rd February. This is the first time that the Russian Federation has hosted the Winter Games. A total of 98 events in 15 winter sport disciplines were held, including bobsleighing, curling, figure skating and freestyle skiing.

Using MediaZ, the brand health study from MEC, we can look at the 2014 Winter Olympics to gain insight into how consumers feel towards them; rating them from love, like, ok or not relevant. We can also determine a property's personality as those that like or love the property are asked to select at least four characteristics that best describe it. Therefore, we can analyse the characteristics respondents associate with the Winter Games.

In terms of sponsors, the Sochi Winter Games had Worldwide Olympic Partners, National Partners, Partners and Official Suppliers. When respondents were asked how they felt about brands' involvement in the 2014 Winter Games and how it affected their perceptions and feeling towards the brand, the majority of them said it makes no difference (91%). However, the other 9% felt more positively towards the said brand. When asked if sponsorship affected how much they liked the Winter Olympics, again, 94% of people stated it made no difference and 6% specified that they liked it more. However, the likelihood to buy the brands when the company sponsors the Winter Games has not been viewed as too successful as, once more, 95% of respondents said it made no difference, 1% stated they were less likely, while only 4% were more likely to buy the brands.

As one of the main partners of the Winter Olympics, looking at how people view Coca-Cola will give us a good insight into whether it was a good idea for the brand to sponsor the Winter Games by using BrandZ analysis. BrandZ is WPP's proprietary tool for understanding the strengths (and weaknesses) of brand properties. The brand relationship study by Millard Brown measures brands in a category context to identify their relative strengths and weaknesses. Although we cannot compare BrandZ directly to MediaZ analysis due to different metrics used, the information from both can guide insights. Compared with its main competitors, Coca-Cola has the highest Bonding showing the high regard people feel for it.

People believe the brand delivers something more than other brands as it again had the highest Advantage score. 7Up recorded the top score for Performance (81%), however Coca-Cola wasn't too far behind with 75%, meaning people's experience meets with their expectations of the category more so for 7Up than with Coca-Cola and 86% feel that the brand is Relevant meaning there aren't too many barriers stopping consumers from buying the product. However, Coca-Cola has a strong brand Presence with 100% knowledge levels. Coca-Cola was probably one of the best brands to sponsor the Winter Olympics out of that category due to its high global awareness level, which is ideal for the sporting event that will have been watched by audiences worldwide.

It is vital for advertisers to understand who watches the Winter Olympics if they are considering sponsorship. The event and the brand need to complement each other and it is essential that the brand is targeting the correct audience. 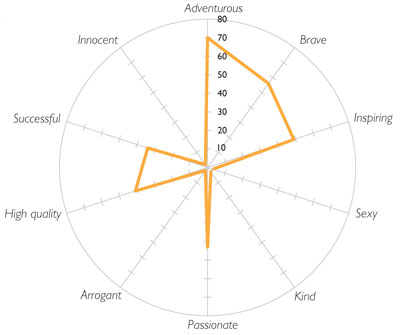