In the week of the UK general election, WARC’s Lucy Aitken asks if there’s an appetite for brands outing their politics.

“We don’t do God,” Alastair Campbell once said firmly on Tony Blair’s behalf, as the former Prime Minister’s head of communications. Publicising Blair’s Christianity in the sensitive times in the aftermath of 9/11 and the invasion of Iraq was regarded by Campbell as potentially disastrous. But today’s world is different. There’s an expectation to stand firm about what you believe in and stick to it.

A sea-change for brands

For a long time, brands weren’t really allowed to ‘do’ politics. But the tide has turned. People actively want brands to stand for something and not shy away from having opinions. In the survey we conducted for our annual Marketer’s Toolkit, there was overwhelming evidence for brands to transition out of purpose and into activism. Three quarters of global marketers surveyed stated that brands need to take a stand on social issues.

And for the upcoming UK election, two of the most prominent issues have been the NHS and Brexit. Which was why Burger King’s bus-side last week was a strong piece of tactical marketing.

On Wednesday 4 December, Burger King tweeted this at lunchtime: 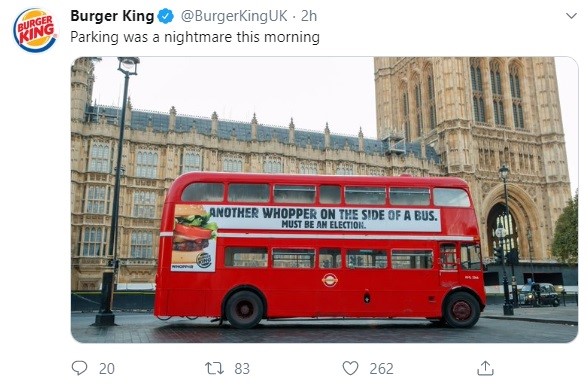 By the afternoon, it was all over social media and generating PR. There was also the genuinely charming sight of some people who didn’t understand that ‘whopper’ also meant ‘lie’ having this gently explained to them on Twitter.

The non-burger ‘whopper’ referred to on the side of the bus was the money promised to the NHS by Vote Leave before the 2016 EU referendum. The £350m a week figure was heavily disputed and remains the subject of intense public debate and scrutiny. 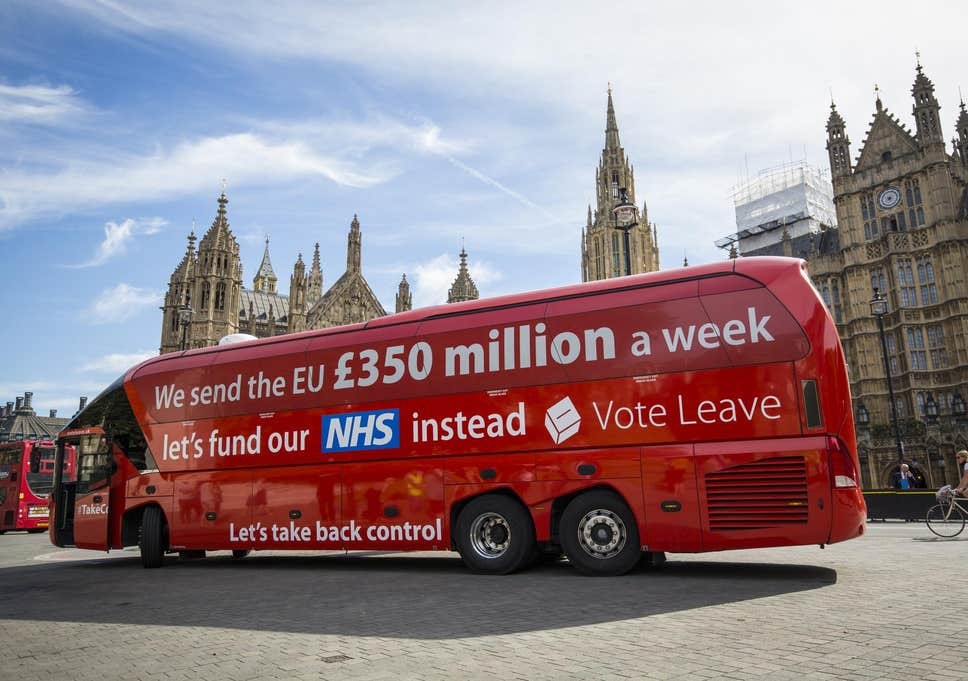 As well as mocking its predecessor, the Burger King bus ad raises an interesting point about brands and politics. Will fans of Boris Johnson, who stood in front of the bus when he backed Vote Leave in 2016, be dissuaded from picking up a Whopper and head for the Golden Arches for a Big Mac instead? Or is that over-thinking it? Isn’t the Burger King bus just a bit of throwaway fun, a water-cooler moment and a welcome and knowing distraction from the looming general election in which the stakes are so high?

The water-cooler angle is the view of Ben Shaw, Head of Strategy at BBH London, the agency behind the Burger King bus. He told me: “The belief Burger King holds dear to its heart is Go Whopper or Go Home. If you’re going to do it, do it properly and proudly. The bus isn’t a worthy political statement or a whole new strand of marketing but an opportunity to laugh with the nation at the absurdity of our times. There aren’t any deep political undertones or campaigning beyond the shared understanding of what the bus referred to. It’s positive, light hearted and about bringing people together.”

Burger King’s bus works because it’s tonally correct. But sometimes brands can be tone deaf when it comes to politics. The Wetherspoon Manifesto was the brainchild of Wetherspoon CEO and prominent leaver Tim Martin. It comprised 500,000 beer mats sporting a pro-Brexit message distributed across 895 Wetherspoon’s pubs in the UK. Martin also toured Wetherspoon pubs earlier this year to shout about why a no-deal Brexit would be the best thing for the country. Sure, I’ll be first in line to admit that I don’t agree with Martin’s politics. But as a PR or marketing activation it falls flat. It doesn’t do anything at all for JD Wetherspoon because no one wants to be beaten over the head with strident political views from a beermat when they’re trying to enjoy a quiet pint. This was particularly poorly judged at a time when JD Wetherspoon’s shareholders were jittery because its share price had fallen by 19%.

Burger King, unlike a lot of brands, can get away with a cheeky bus-side because of its irreverent brand personality. But part of its personality is also in search of political harmony. Last year in Costa Rica, it tackled escalating political divisions during the election by inviting candidates from all parties to a shared meal at one of its restaurants. And who can forget when it leaned in for a cuddle with long term rival McDonald’s with McWhopper on World Peace Day in 2015? These kinds of executions have made it front and centre in many of the big issues of the day, from being one of the first brands to embrace LGBTQ rights, to taking a stand against bullying.

This is new territory for brands and, as such, needs to be carefully navigated. In 2017, a 4As report claimed that 58% of people disliked marketers taking political positions. But now, in a post-Kapaernick world, brands need to consider their politics, not forgetting that once you’re in, you’re in. In fact, you could even argue that brands are doing politics now whether they like it or not. It’s just up to them how public they want to be about it.