At Mobile World Congress, the telecoms industry shows the world the fruits of its research. WARC’s Sam Peña-Taylor shares a view from the limits.

There’s a strike on. Metro workers in Barcelona have taken industrial action over the presence of asbestos, and 12 TMB workers have become ill as a result. To make their point – a fair one – they’ve targeted the four days of MWC 2019, and the 100,000 or so people that have descended on the city are taking the bus with me.

The regular commuters look on bemused at the people complaining about the lack of Ubers – the company suspended operations here at the end of January. The guy at the hotel reception is worried about the way things are going, worries that the Congress might leave the city and never come back. For the residents’ part, they could really do without the city swelling by almost a fifth for a week.

Nowhere near the Congress, which is held in the suburbs, the city centre is draped in colossal posters that advertise the latest Huawei device, the foldable Mate X. Amid the political battle that the US has waged against Huawei – the FT has dubbed MWC the “battle of Barcelona” – the company has finally found some good PR.

I say found. The Mate X is a staggeringly impressive object. On screen and in poster form it is pretty cool, but up close – despite the glass cage in which it sits – the fold is unobtrusive, and apparently imperceptible when the device is open. I saw it among the sea of other phones taking photos of a phone. The company may be bad at shaping its public and political perception in Washington, but here in Barcelona the product makes its point among consumers. 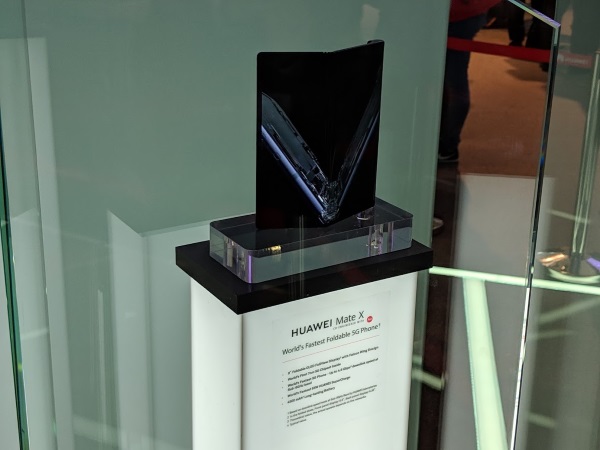 Already the competition for the folding phone has combatants. Last week, Samsung unveiled its prosaically named Fold device, which by being the first, let Huawei claim the titles of thinnest and fastest. It is also the most expensive: at $2,600, it’s a similar price to a high-end laptop. But what really illustrates the tone of the event is the 5G flag that Huawei has attached to the phone, along with pretty much everything else it has on show.

That’s because the real battle that’s going on here is about who will be the company that unlocks 5G for Europe’s telcos. On the first morning, the keynote featured a slew of CEOs from Telefonica, Orange, Singtel, Vodafone, and a quite awesome presentation from KT’s enthusiastic CEO, Dr. Chang-Gyu Hwang, which featured a utopian video to depict 5G’s low-latency powers in high-intensity situations. He was announcing the first commercial 5G network: that was the news get, but the demonstrated use cases were quite intense.

The other chiefs reflected less visual concerns. Put simply, the data load on networks is rising far faster than revenues to telcos, which are expected to front huge amounts of investment to get their networks up to the challenge. Huawei is acutely aware of this, and has worked hard to make the case for its inclusion in those plans. It has made much of the seriously competitive installation and running costs of its equipment. What’s more, any ban on Huawei would adversely impact the existing structures of several European telcos.

For Huawei’s part, chairman Guo Ping took to the stage to talk about the technical standards that will earn trust. “We can proudly say that 5G is safer than 4G. As a vendor, we don’t operate carriers’ networks and we don’t own carrier data," he said, adding the promise: “we don’t do anything bad – we don’t do bad things.”

“Here, let me say this as clear as possible, Huawei has not and will never plant backdoors. And we will never allow anyone to do so in our equipment. We take this responsibility very seriously”.

But officials are mulling Huawei’s position. Both Australia and New Zealand have banned the use of the company’s product on 5G networks. The UK and Germany have considered the US’s claims, but have both expressed their doubts.

Though we can't see 5G – just like you couldn’t see earlier networks – we will feel its effects. It will allow users to see things faster, quicker – we’re told – than the human brain can react. That changes everything. It's hard for civilians to care about it until they see it in action. Simply put: its potential is enormous, and we will be covering how firms are preparing. At the moment, we’re pushing networks to the limit, and everybody needs more.

For now, we’re waiting outside the venue for a bus that might take these thousands of people back to the centre. We’re at the limit.