Clients often come to us saying their innovation is not having the impact they want: they need more ideas, or fewer bigger ideas, or they need to get them out in to the marketplace much more quickly. When we dig in to their Innovation Value Chain1 we frequently diagnose that the obstacle is not where they first thought. 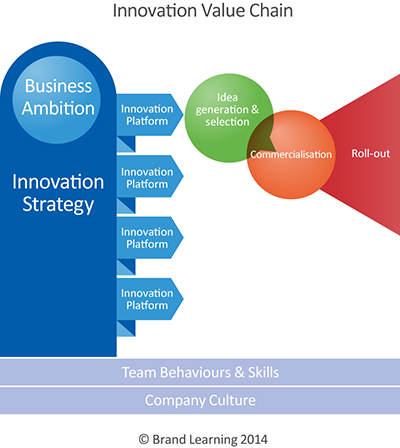 Innovation is on everybody’s agenda. As companies emerge from the cost-cutting and consolidation cycles that accompany recession, focus has turned to how to create value through new products, services and conversations which enhance the customer experience2. Quite simply, innovation is not a choice in today’s world, but a way to survive and thrive.

But there’s the challenge of making it happen, fueling what we at Brand Learning call The Customer Experience Engine3. The smart companies know it’s about creating value for all concerned, not just themselves but also their customers so it’s truly win-win for all.

We have previously written about the Innovation Value Chain, describing the chain of capabilities which must feed each other to be successful1. In this blog we’ve posed a few questions to help you spot where you might need to lift capabilities. We’ve also given examples in each area of companies and brands that have recently caught our eye, and the lessons they provide.

How did you fare? Take a look at these examples we’ve spotted for each step of the Innovation Value Chain – and what we can learn from each.

Xiaomi’s innovation strategy is one to watch, as they prepare to push in to India, SE Asia and other emerging markets. The Chinese smartphone manufacturer was only founded in April 2010, but has already surpassed Apple, taking 6.4% share of the domestic market4. Later this year they are launching a tablet to rival the iPad mini, which is 60% cheaper but claiming to have a higher performance processor and more advanced image graphics (dubbed the Xiami ‘Mi Pad’). What’s interesting about their strategy is the decision to sell the smartphones at tiny margins in order to capitalise on the larger potential revenue stream from software. Revenue hit $5.2B in 2013 with users downloading more than 1 billion apps!

Biomimicry is influencing approaches to sustainability, providing fresh perspectives to help generate ideas. Put simply, it’s the study of nature to inspire solutions to design challenges; Velcro being the example people are most familiar with5. A recent example we like is Ornilux, glass sheeting made by Arnold Glas which is designed to reduced bird collisions - it has a special UV-reflective coating that is almost transparent to humans but clearly visible to birds. Inspiration came from how the orb-weaver spider incorporates UV-reflective silk strands in to their web as a warning for birds.

Lesson: Make insightful connections between challenges you face and everyday life. The natural world is a great source of inspiration – the perfect excuse for some reflection time outside of the office.

Some companies approach Brand Learning because they feel they generate too few ideas of the ‘right size and quality’. This is not a challenge facing Lego. To the contrary, they receive more than 20,000 unsolicited ideas a year! Their challenge is how to select the best ideas and they have turned to a crowd-sourcing network to help them called Lego Ideas. They let the community decide – fans must make a prototype of their idea, and if they get 10,000 people to support it, Lego will then review it for production (and the person who had the idea gets 1% of future net sales). In essence, Lego are handing over some control for the customer experience to the people most devoted to their brand. An Australian Lego fan, Brent Waller, saw his creation hit the shelves last month – a miniature of the Cadillac ambulance from Bill Murray’s 1984 comedy Ghostbusters

Lesson: Consider crowd-selecting as well as crowd-sourcing ideas. It doesn’t just have to be with brand fans.

This co-creative and iterative approach to prototyping and commercialisation is what’s helping leading innovators succeed. “Sell it before you build it” is the advice from Kush co-founder, Prerna Gupta. Her ‘reverse karaoke’ app, LaDiDa, has had us smiling across the Brand Learning offices. The app takes a vocal recording, adds backing music to it whilst making the vocals sound better, like they’ve had professional studio time.

Lesson: Don’t wait until you have the “perfect solution” before you test out your idea. Take the plunge and share it before it’s built.

Engaging with partners and stakeholders enables innovators to truly understand value-creation from their perspective, so securing launch support. This is particularly acute for Pharmaceutical companies, who come under intense scrutiny by physicians and insurers. Gilead’s launch of the ‘wonder drug’ Sovaldi at the end of 2013 has provided a breakthrough innovation. It’s been shown to cure Hepatitis C in 90% of patients in just 12 weeks, whilst being safer and 20% cheaper than the older treatments. Yet this has not prevented Sovaldi from being vilified for ‘asking for a blank check’ by charging $84k per patient6.

Lesson: Invest time early with stakeholders beyond the end-user. This isn’t the same as compromising to satisfy everyone in the value chain – Gilead believes it knows when to stand firm – but it does provide insights to support joined-up cross-company commercial plans.

The hard work is often just beginning once the innovation is launched. The ‘test and learn’ approach to diffusion or rolling out innovation demands agility and customer connectivity. The key is being prepared to commit to it and scale it, if it works, or cut your losses early, if it doesn’t7. Amazon demonstrated this approach in their deal with the US Post Office to deliver on Sundays – the first to partner with them on such a large scale and push the boundaries of the service the customer can expect. Having tested the commercial model in New York and Los Angeles late last year, last month they announced they were quickly rolling out the service to 15 additional cities.

Lesson: Make sure you’ve pinpointed the repeatable model so that you can roll out with speed. Keep close to the customer experience to remain on track.

Whilst we’ve looked at the steps of the Innovation Value Chain sequentially, by its very nature innovation is unpredictable, at times chaotic and very often not linear. There may be surprises, failures and learnings all along the journey. What gives companies a competitive advantage is the culture in which this all happens, and it’s the hardest thing to copy. Netflix have publically shared their ‘cultural handbook’ which describes the nine behaviours and skills driving innovation8. They are also very clear on what they won’t tolerate, such as “Brilliant Jerks”, relying on their culture (and generous severance packages!) to expel them.

Lesson: Culture is King. Take time to design an innovation culture that is reinforced by leadership and enables people to deliver their very best.

A final thought on the Innovation Value Chain. Any weak link can break your innovation efforts, as many of our clients have disclosed. By pin-pointing the issues and strengthening capabilities, a stream of relevant, new products and services can be unleashed.

This post is by Simona Hartley, Client Capability Director at Brand Learning

1 Innovation is back – but not as we know it, Brand Learning white paper, 2011
2 How marketing needs to reinvent itself in the drive for growth, Brand Learning blog, May 2014
3 Organising around the Customer Experience, Brand Learning white paper, June 2014
4 Asian Nikkei, May 16 2014
5 Hooked on Innovation case study, World Intellectual Property Organisation
6 What Price Innovation? The Sovaldi Saga, Forbes, May 29th 2014
7 Experiment to Innovate: Cultivating a ‘Fail Smart, Learn Fast’ Culture, Eye for Pharma, Feb 3 2014
8 Netflix Cultural Handbook, Slideshare