The iconic “You’re Not You When You’re Hungry” campaign has delivered ten years of success for Snickers. Stephen Whiteside from WARC explains why consistency, local relevance, and humor have all played a critical role in this outcome.

Snickers’ “You’re Not You When You’re Hungry” marketing program celebrated its tenth anniversary earlier this year.

The candy line, which is owned by Mars Wrigley, heralded the occasion with a typically irreverent Super Bowl spot that featured a giant Snickers bar being dropped into a massive hole in the ground - all with a tongue-in-cheek intent to fix a range of the world’s problems, from adult scooters and selfie sticks to snooping smart speakers.

In assessing the reasons behind Snickers’ success, and to provide guidance for marketers looking to craft equally powerful work, WARC joined forces with sister company Cannes Lions to demonstrate how the candy brand has translated several marketing best practices from compelling theory into meaningful results.

One lens through which to view Snickers’ on-going strength comes from “The Effectiveness Code”, a white paper from Cannes Lions and WARC that drew on the analysis of nearly 5,000 case studies.

Based on this information, James Hurman, founding partner at innovation consultancy Previously Unavailable, and marketing consultant Peter Field, developed a six-stage framework to categorize the levels of impact of creative marketing called the “Creative Effectiveness Ladder”. 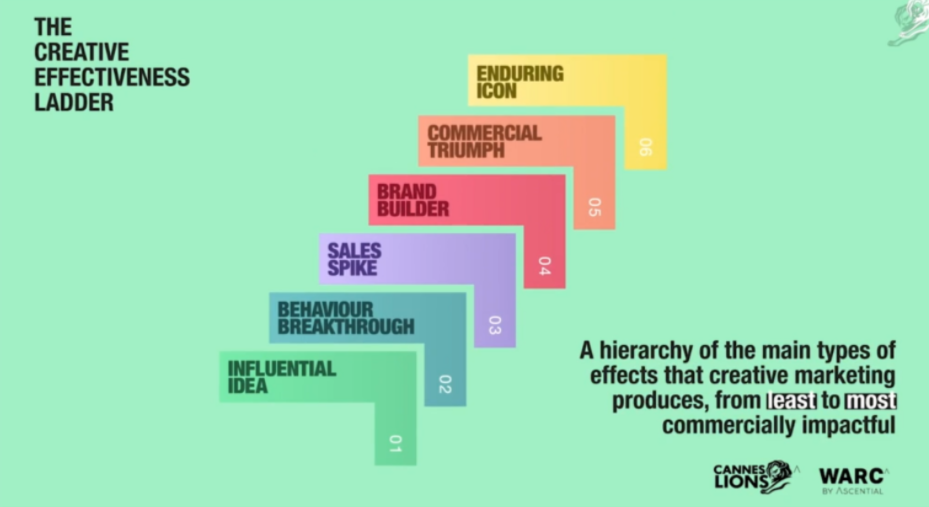 The top-performing initiatives, Hurman and Field reported, can be described as “enduring icons” that have used creativity to fuel brand and sales growth over a period of three years or more. Members of this group have also:

Charlotte Williams, vp/content at Cannes Lions, noted that “You’re Not You…” - which is predicated on an acknowledged human truth that an empty stomach can instantly transform how people act - meets all of these criteria, making it a true “enduring icon”.

“It's a campaign platform that has used creativity to drive brand and sales growth consistently over a period of three years or more,” she added. “It's stuck with the same creative strategy since its debut at the Super Bowl in 2010. And it has created strong commercial outcomes ever since.”

Further corroboration of Snickers’ success can be found in the annual barometer of excellence that is the Cannes Lions International Festival of Creativity. Campaigns falling under the “You’re Not You…” umbrella have picked up an impressive 47 Lions - spanning 14 categories and six countries - in the last decade.

“It's no coincidence that this mega-winning Lions campaign has a simple, and bold, idea that sits at its heart,” said Susie Walker, head/awards at Cannes Lions.

Long-term consistency is a critical elements of Snickers’ success

Alongside its accolades at the Cannes Lions, Snickers has placed in the WARC Effective 100 - an annual breakdown of the most-awarded campaigns and companies in effectiveness awards shows - four times.

David Tiltman, WARC’s vp/content, argued Snickers is a “rare example of a brand keeping a single creative platform in the market” in the long term.

And he pointed to a slate of research studies that supported this very approach:

Despite this empirical proof, short-termism often takes root during times of crisis - and many brand custodians have cut back on their brand-building efforts as COVID-19 has spread and revenues come under pressure.

Walker urged marketers to take a page from the Snickers playbook - and backed up this recommendation by comparing winning Cannes Lions’ case studies after the 2010 recession with those from before the downturn in 2007.

“We found that brand-led, long-term work actually increased by 85%,” she said. “Brands that thrived were the ones that focused on brand building over time.” 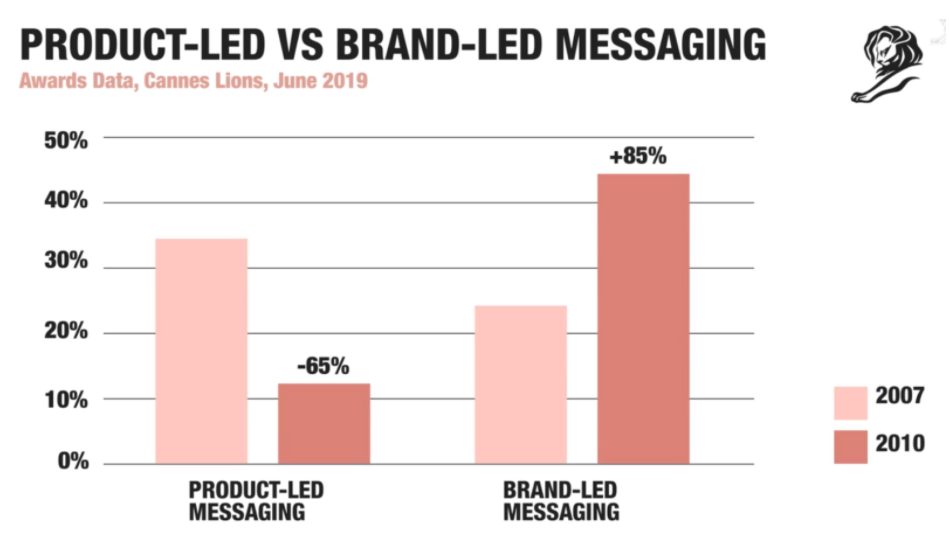 A second contributor to Snickers’ strong performance, Tiltman proposed, is the fact “it's a global strategy with local application. And it's a rare example of a campaign, which, from the very outset, was designed to have global appeal that can be expertly adapted to local markets.

“The team were looking for a human truth with broad relevance that could unite Snickers’ global communication, but create the possibility for that local cultural insight.”

Campaign iterations everywhere from Australia, France, and the United Arab Emirates have claimed Lions with advertising that displays common traits while delivering local relevance. “To unify the work, the team works on global tone-of-voice guidelines, which include things like, ‘If you've got to work at it, it's not down to earth enough,’” Walker said.

Using celebrities initially was an effective tactic to elucidate the underlying principle of “You’re Not You...”, but the reliance on famous faces has dissipated slightly as familiarity with the campaign has grown.

“The underlying idea has come more to the fore, and it's been applied to anime-game characters in a recent Japanese social campaign. And, in China, Snickers inserted itself into a highly relevant moment for young people: the threat of hunger while studying for the grueling gaokao exam,” said Tiltman.

While “You’re Not You…” began as a TV campaign with a Super Bowl premiere, it has since “proved endlessly adaptable to different channels and different uses,” he continued.

“It's worked both as a brand-building message in mass-reach media, and as a way to reinvigorate short-term sales campaigns.”

An illustration in the latter category came from Australia, where Snickers analyzed sentiment on social media and lowered prices whenever levels of online anger rose - and let consumers access barcodes for reduced price on their cellphones.

Whether it is updating product packaging to feature hunger-induced conditions (like being “Testy” or “Snippy”) or creating fake profiles on dating app Tinder to warn people against making bad decisions when they’re hungry, malleability is a fundamental source of advantage for Snickers.

“This is important, because all aspects of the brand's activity can reinforce the message,” Tiltman said.

“In turn, that builds recognition of the idea; it builds the distinctiveness of the brand; and it keeps tying Snickers back to hunger.”

Using the dying art of humor in marketing

A final strength of the campaign, according to Tiltman, is its use of humor - an approach that has been constant since the first “You’re not you…” ad starring a trash-talking Betty White.

“There's evidence that humor has been used less in advertising over the past 20 years. And recent data from Kantar shows just how significant this decline has been. And this, of course, coincides with the rise of purpose and sort of seriousness in advertising, and also the shift to short-term sales tactics,” said Tiltman.

Multi-market campaigns, in particular, often avoid humor, as what is considered funny varies by market. And Tiltman referred back to “The Effectiveness Code” in demonstrating that tickling the funny bone is an impactful model.

“Humor is a creative strategy we've seen in about 24% of work that leads to a sales spike,” he said. “Snickers really backs this up, the platform allowed local markets to find what was funny for them.” 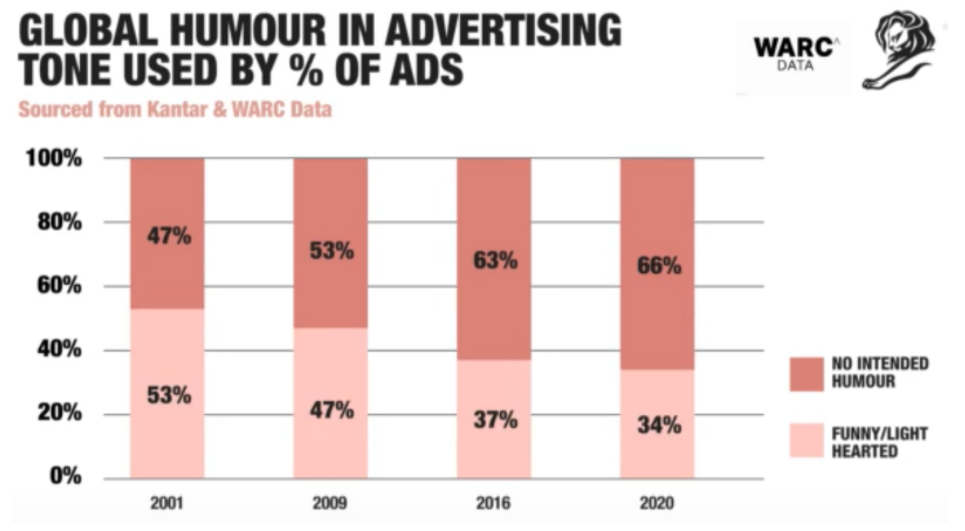