In his new book, Be More Pirate, Sam Conniff Allende, co-founder of Livity, outlines a model for a radical new way of organising with wide-ranging implications. WARC’s Sam Peña-Taylor explores the arguments.

Sam Conniff Allende likes to build things by breaking down what came before. A co-founder of Livity, the south London-based socially-focused ad agency which feeds much of his thinking, he is articulating the thesis of his first book, Be More Pirate, in uncommon fashion. He writes passionately about the strange and wonderful enterprise he helped to build, just as he leaves it behind. 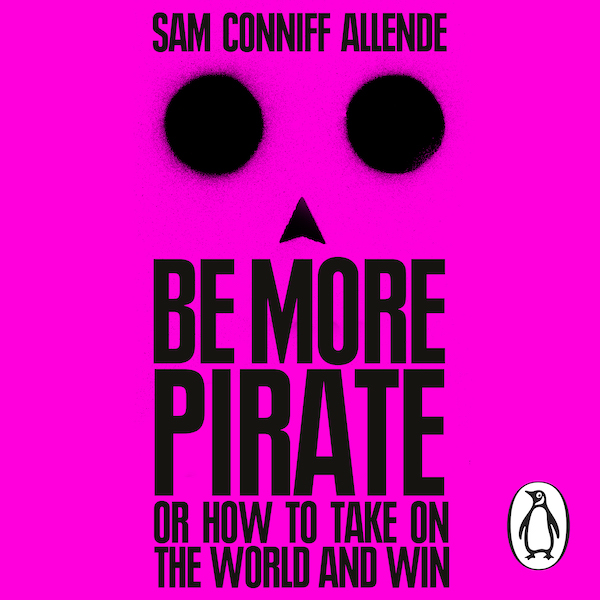 A couple of weeks after we first spoke, he sent out an email announcing his withdrawal from the agency he had helped to build, an agency whose entire reason for being was totally new. Not only had he created Livity, he built a business around a question. His plan is to keep asking questions.

“Livity began as an experiment to discover whether ‘ethical marketing’ was an oxymoron,” he writes. His experience is one of constructive intellectual unpicking, an ability to step back and critically break down the assumptions on which one’s life is built. Don’t be fooled: despite the business experience that guides the book, this is no raw-water fuelled guru’s ramblings.

To speak to Conniff Allende in person is to find yourself carried by his enthusiasm. While many ad people are enthusiastic, few catch you quite as off-guard as he does. This comes across in his writing as the voice of a friend with compelling ideas to share – it’s a tone you miss once you leave it.

Part of his quirk is his biography, not only the question that led him – and, of course, Livity co-founder Michelle Morgan – to create a company that fused a social purpose with the ability to generate profit, but the way he came at marketing from an odd angle. The first agency he set up, DON’T PANIC, was a home-made, roughly-hewn affair which grew out of his six years’ experience running nightclubs and raves.

Questions from a different angle also form the backbone of the book. The implication of re-doing is to consider what needs to change, what could be better; five of these commands form the thesis of Be More Pirate. In order to become one, you must:

Yes, these ideas are simple to understand, but far more difficult to actually do. They call on bravery more than process, rewarding new ideas capable of answering the important proviso: does it work?

Along with new ideas and new ways of organising, the emphasis on moving with what works borrows from tech, without obsessing; far more important is an attitude of collective responsibility, of shared ambition. In a telling passage, Conniff Allende goes as far as to illustrate the moment in which new ideas are put to the test and you’re on your own:

I am saying that there’s huge power in declaring to yourself (and your crew or your teammates) that you’ve hijacked the ship, changed course and are now fully accountable for your own actions.

It’s the accountability that makes the difference. No great fan of authority for authority’s (or the salary’s) sake, Conniff Allende identifies precursors to this creative re-making in the pirates of the Golden age.

Unlike the “earnest men with large furrowed brows” who brought about the industrial revolution through purposeful invention, he writes, pirates changed their world “through wilful obstruction that challenged all of the rules of the time.” They wanted more: “They didn’t just want to tear down the old order; they wanted to create something better for themselves.”

Conniff Allende’s focus is anything but abstract. The book’s ability to juxtapose questions with answers keeps your feet on the ground. The above passage, for instance, follows a question that Conniff Allende has deployed in many talks and workshops in the development of this book. The questions are uncommonly personal: “What principles, values, or ideas are you willing to fight for?” Put it another way: what values are you willing to lose your job for?

Key to pirates’ enduring power is the story and the flag – and the terror that the two elements combined created. Conniff Allende makes the point that violence was a significant expense for pirates. Progressive compensation policies – held as a condition of one’s participation in the crew – meant that any limb lost detracted from everybody’s eventual booty. Far more effective was to have your opponent adequately terrified so as to not put up much of a fight. After all, “being able to communicate your idea effectively is often as important as coming up with the idea itself”. Effectiveness is rarely tested in neutral or favourable conditions; for a communication to work, it has to do the job among a hostile crowd.

But it’s the book’s exploration of principles – Pirate Codes – that chimes with the current conversation most clearly. Following a series of howling communications errors in recent months, usually stemming from a poorly thought out idea of social purpose, new ideas in this area are fundamental. Moreover, it’s about “deciding what’s important, what is your North Star when you’re lost” – for pirates, living outside the law, such rules meant that they trusted each other implicitly, that they worked for each other.

Principles are not just for communications. Organisations today need to think very differently from businesses of the past. The difference Conniff Allende posits is that an antiquated model of business plans is giving way to a set of beliefs around which a group of people – an organisation – can form, align, and progress. One of the most contentious ideas he asks us to consider is a model of business that does not prioritise constant growth. When you de-prioritise growth, you begin to resemble a far more malleable group of individuals that can assemble and collaborate for the size of the task.

Today it’s especially important to understand how to collaborate effectively and achieve scale without growth because the idea that we should relentlessly pursue growth is now often stalling our progress and reducing our autonomy.

Moreover, the size that growth has created has become something of an albatross around companies’ necks. As Pete Maulik, founder of global innovation agency Fahrenheit212, has argued, for big business, ‘big’ is now part of the problem.

So what are we to make of Sam Conniff Allende’s ode to early radicals? As a book of stories, stories in which the characters challenge injustice, break bad rules and make new ones, in which assumptions are challenged and re-made, it makes for compulsive reading. As a book of ideas, Conniff Allende’s passionate call to arms makes powerful, almost uncomfortable reading as your heart and your head find themselves, unusually, on the same page.

Be More Pirate is available to pre-order from Amazon.