Advertiser spend on sports sponsorship is expected to rise 5% this year to reach more than $48bn worldwide – the strongest growth in a decade and ahead of growth projections for all traditional media, according to a new study from WARC.

Sports Sponsorship Investment, the latest Global Advertising Trends report from WARC Data, puts the total at $48.4bn and notes how recent market growth has been buoyed by record investment ahead of the 2020 Tokyo Olympics.

This event is expected to garner $5.94bn in sponsorship revenue during the current Olympiad cycle – almost double the previous one.

WARC believes $1.95bn will be spent by worldwide Olympic partners such as Coca-Cola and P&G – double the amount recorded during the previous Olympiad – while a further $3.33bn will be invested by domestic sponsors including Canon, Asahi and Fujitsu for Tokyo 2020 – four times higher than Rio 2016.

Beyond this, however, the report highlights three other trends:

• Domestic properties are in rude health

In the US, where 82.5% ($15.5bn) of the regional total is transacted, brand associations with the National Football League (NFL), National Basketball Association (NBA) and Major League Baseball (MLB) are forecast to reach $3.97bn in value in 2020, just over a quarter of all spend. 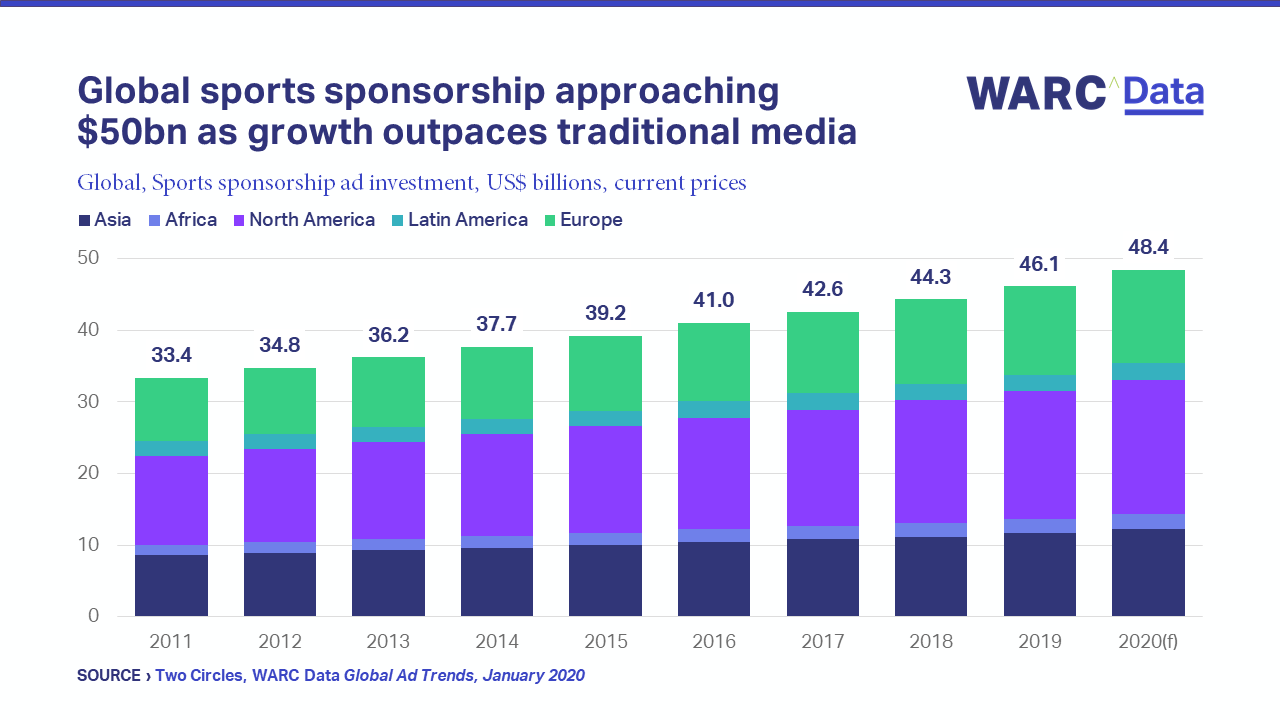 In the UK, Europe’s second-largest market, English Premier League (EPL) shirt sponsorship alone accounts for a quarter of adspend in the gambling sector. Betting companies are expected to spend £148.7m on internet ads this year, £49.4m on TV, and £34.6m in print to reinforce a projected £72.0m investment in football shirt sponsorship this year.

Asian investment has been lifted by the upcoming Olympics, Chinese brands’ association with the 2018 FIFA World Cup, and the PyeongChang Winter Olympics, which drew $649m from domestic sponsors in 2018.

Further, WARC Data analysis of World Rugby financial filings shows sponsorship deals of the last Rugby World Cup, held in Japan in 2019, are likely to have topped $50m for the first time. In India, IPL cricket sponsorships are thought to have been worth $48m to brands in the 2019/20 season, up from the $44m invested during the previous. The automotive sector spends the most in Asia at $644m. Financial services, apparel and telecoms follow.

Brand investment in e-sports – sport competitions using video games – is expected to reach $795m worldwide this year, a 23.1% rise from 2019. Almost three quarters ($584m) is to be invested in sponsorships, while a further $211m is to be spent on spots during ad breaks.

Nike moved into e-sports sponsorship in H1 2019, entering into a four-year deal with the League of Legends Pro League (LPL) in China for exclusive jersey rights. Previous sponsors of the league, which attracts a peak audience of 95m, include Doritos, Intel, HP, L’Oréal and Mercedes-Benz. 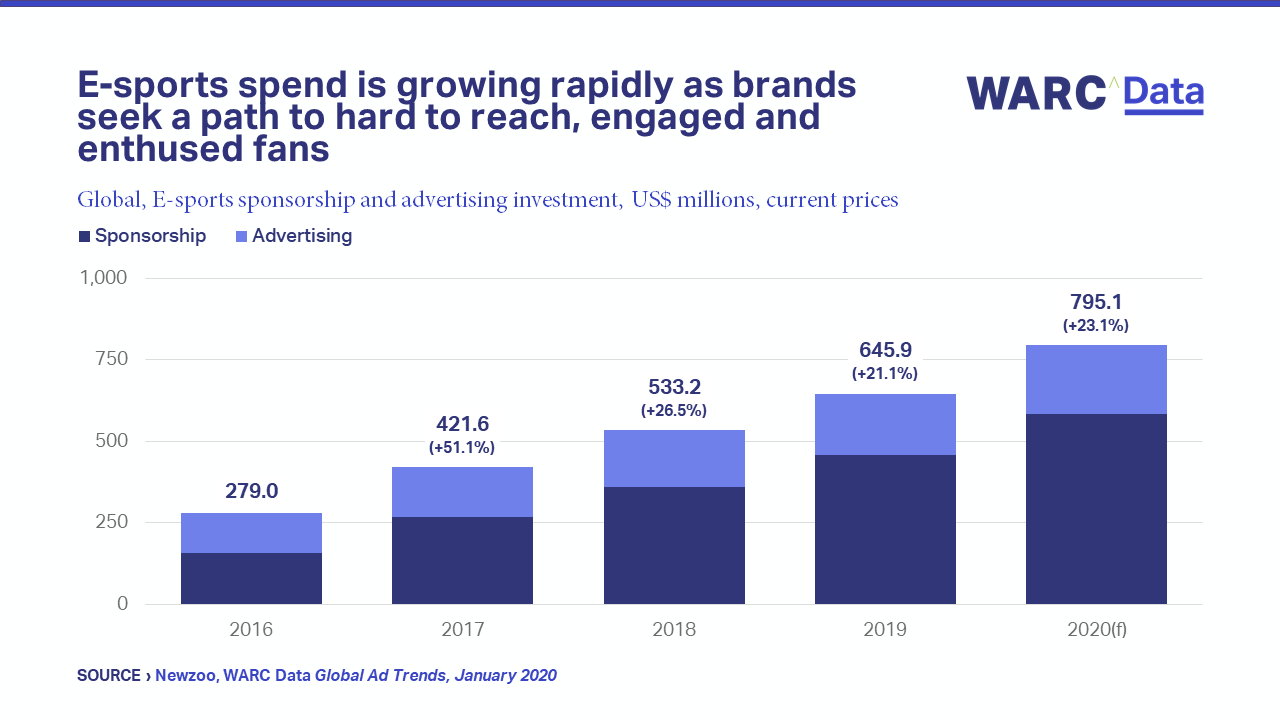 • Practitioners’ confidence in measuring business returns from sponsorships has fallen

Despite the increased levels of investment, one in four practitioners has no confidence at all in measuring business return from sponsorships – up from one in five in 2018 – and the overall proportion with some confidence (70.2%) is also lower than a year earlier (77.0%).

Agencies are most confident when measuring sponsorship performance and brands least, while one in four rights holders have no  confidence at all. ANA research shows that 84% of practitioners believe that it is important that the sponsorship property helps measure results, though only 30% of respondents audit or verify the metrics received from these properties.

James McDonald, Managing Editor, WARC Data, and author of the research, adds: “Legacy rights holders are set to benefit from a windfall in sponsorship revenue in 2020, as brands continue to vie for association with properties that provide access to engaged and enthused audiences at scale.”

“E-sports is offering a new avenue to hard-to-reach audiences for brands, ones which are young, affluent, and more likely to take steps to block advertising online. It also presents new revenue streams for media owners; Tencent, Amazon, Google and Facebook all have a stake at play.”

The full report is available to WARC subscribers. Other readers can download a sample report here. You can read more on this topic in the next issue of Admap, published on Monday.