Topics
Australia’s Competition and Consumer Commission has unveiled proposals that aim to force two of online advertising’s most significant companies – Google and Facebook – to cede the dominant position they have developed.

It is difficult to overstate the sheer power of these companies in the Australian digital media landscape. According to the Financial Times, the ACCC estimates that for every A$100 of digital adspend, A$47 of that will typically go to Google, A$21 goes to Facebook, with A$32 left for all other websites to fight over (above the global average: WARC’s Adpsend Database indicates Google took 44.9% of online adpsend in 2017, while Facebook took 18.8%). 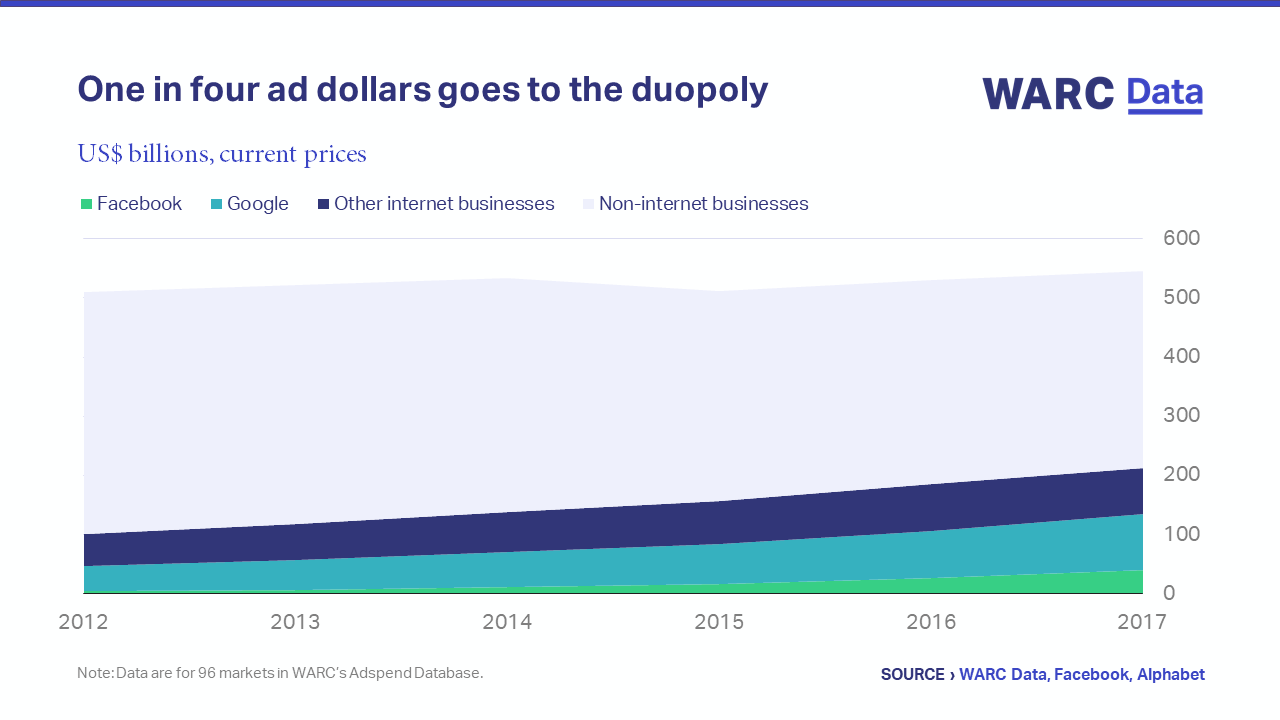 ACCC chair Rod Sims explained that the market position of both these companies justified a greater level of oversight. “When their dominant position is at risk of creating competitive or consumer harm, governments should stay ahead of the game and act to protect consumers and businesses through regulation.”

The core proposal is to force Google to unbundle the Chrome browser from phones and other devices in order to undo its “near monopoly” in search advertising. Furthermore, the ACCC has suggested setting up an investigative watchdog to monitor how such digital platforms rank ads and news with a view to examining concerns that they are abusing their power. “Anti-competitive discrimination by digital platforms in favour of a related business has been found to exist in overseas cases,” the body said, noting the $5bn fine on Google from the European Union.

The new body would have the power to demand information on the companies’ algorithms and to investigate whether their own brands are getting preferential ranking treatment. “The operation of these platforms’ key algorithms, in determining the order in which content appears, is not at all clear,” said ACCC chair, Rod Sims, in comments reported by the Guardian.

Elsewhere in the report, however, the ACCC rejected calls made by Rupert Murdoch in November, during a News Corp earnings report, where he pointed out that trusted publishers enhance the value and integrity of Facebook, for example, and that while carriage payments would have a minor impact on the social media giant’s profits, they would have a major impact on the prospects for both publishers and journalists. Instead, the commission recommended a number of tax incentives for public interest news organisations.

Sourced from The Financial Times, The Guardian Australia, WARC