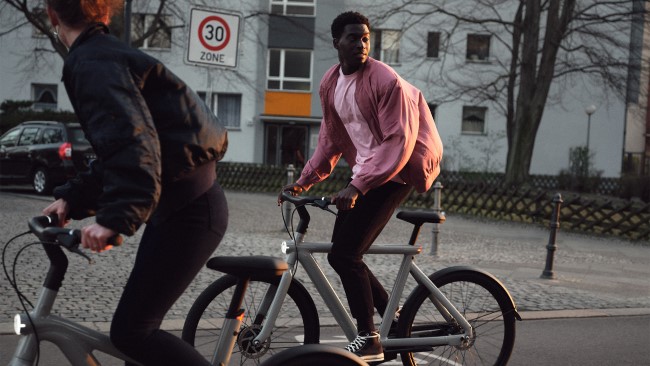 Electric bikes are gaining in popularity as battery technology improves, but the Dutch startup VanMoof, maker of eye-catchingly simple urban bikes, sees an opportunity to switch competitive set as fuel prices rise and compete as a cheaper alternative to a car rather than an ultra-premium bicycle.

“Our competitors are the car brands,” says Co-CEO Ties Carlier, in an interview with the Financial Times. He reports many customers choosing e-bikes for short trips and using their cars for trips outside their city. Some households are even selling their second cars and buying two e-bikes.

“With cars,” Carlier explains, “it’s not just the fuel, it’s the wear and tear, the parking” that all cost money. Inflation has hit most categories, and with winter coming, people’s daily costs are set to increase.

Car fuel remains of particular concern to drivers, with news of oil producing nations (Opec+, which include Saudi Arabia and Russia) mulling a production cut in order to sustain prices in the face of weakening demand.

Why it matters: a deep shift in competitive set

Positioning in the market really matters, as it allows brands to radically shift how their pricing – vital at a time of rising costs – is perceived. Veteran strategist and author Richard Shotton views Nespresso, the premium coffee making system from Nestlé, as a strong example of this.

“By selling espresso pods in cup servings they managed to change their competitive set from packets of roast and ground coffee to providers such as Starbucks or Caffè Nero. By creating a comparison with a more expensive option Nespresso has created a perception of good value and significantly boosted sales.”

By both the vagaries of the market, and by its own clever positioning, VanMoof appears to be making a similar move in personal mobility.

Speaking to the FT, Carlier was positive that the company could respond to the cost of living crisis and turn it into a “very good” moment for the company. Despite the product costing just over £2,000 at least and just shy of £3,000 at the top end, it remains confident it can save people money.

“An e-bike is the best alternative for [a car] in the city … It’s also, luckily, one of the most affordable solutions compared to a car, definitely, but even compared to public transport in London.”

Still, the electronic aspect has exposed the company (and the whole category) to supply chain issues and the ensuing price rises of semiconductors, on top of the pandemic-era bike component shortages.

In many ways, the brand is attempting to occupy an Apple-esque place in the burgeoning world of e-bikes. The rider has to do very little once the bike is out of the box: its gears change automatically and, for a fee, the company operates a ‘Bike Hunter’ program through which it will find a stolen bike within two weeks or replace it – not unlike AppleCare. This scheme also provides useful fodder for VICE-style videos around different global cities as the hunters – who really do not look like they're about to go and bust thieves – seek out and recover stolen bikes.

It deploys creativity in ways that get it noticed. Look, for instance, at its packaging strategy, which responded to a spate of bikes damaged in transit by adding the implication that its boxes contained televisions. It claims shipping damages dropped by around 70%.