What effectiveness means in 2021 | WARC | The Feed 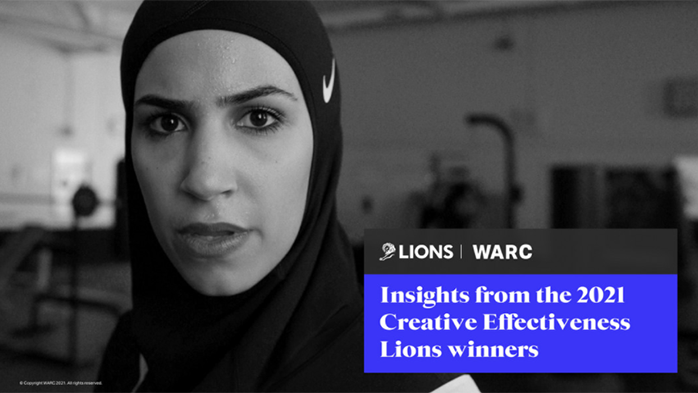 What effectiveness means in 2021

A new analysis of the 2021 Creative Effectiveness Lions uncovers the trends and lessons about what first-class effectiveness looks like in 2021.

This is the subject of WARC and Lions’ Insights from the 2021 Creative Effectiveness Lions winners, a new report based on in-depth interviews with the award jury and a meta-analysis of all the entries. Non-subscribers can access a sample report here.

Key to many of the winning entries was a move away from tech for tech’s sake, and toward technology as an invisible enabler to creativity, a tool to make audiences, and ideally customers, feel something.

The biggest lessons surround creativity. Both at the level of bringing creativity to day-to-day briefs like driving app sign ups, and at the point where your creative is truly brave. Both drive results.

“Creativity is still the oxygen to growth,” says Jury President Ann Mukherjee in the report.

This year’s Grand Prix went to sports giant Nike’s Dream Crazy campaign. Fronted by the former NFL star Colin Kaepernick, who had been shunned by the league after taking the knee in protest against police brutality toward African Americans, the campaign took a side in a political conversation, demonstrating an understanding of both its audience and the athletes that represent the brand.

“Nike knew it needed to stand up for the younger generation’s values to really resonate with them,” explains Mukherjee. “By doing that, it was rewarded with business sales and market share.