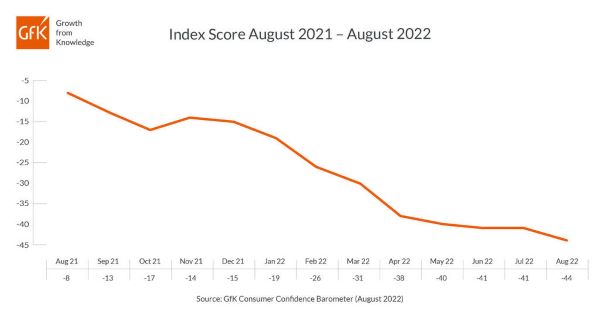 Faced with unrelentingly bad economic news and the prospect of worse to come, consumers are responding with “a sense of capitulation”, according to the latest data from GfK.

GfK’s long-running Consumer Confidence Index decreased three points in August to -44, the lowest since records began in 1974. All five component measures were down in comparison to last month’s figures:

With ever-rising prices – inflation is now at 10.1% – and falling real pay, people are understandably worried about their future and looking for help from any quarter. The government seems to have gone AWOL, so businesses are the next obvious candidate – and as the Edelman Trust barometer found earlier this year, “on competence, business now leads government by a 53-point margin and is viewed as more ethical than government by 26 points”.

Just as the UK’s supermarkets emerged from the initial COVID-19 period with their reputations enhanced, so the current crisis could be an opportunity for sensitive brands to achieve a similar outcome.

“These findings point to a sense of capitulation, of financial events moving far beyond the control of ordinary people. [T]he strain on the personal finances of many in the UK is alarming. Just making ends meet has become a nightmare and the crisis of confidence will only worsen with the darkening days of autumn and the colder months of winter” – Joe Staton, Client Strategy Director, GfK.