Media inflation in China to remain within 3% in 2023: Ebiquity | WARC | The Feed 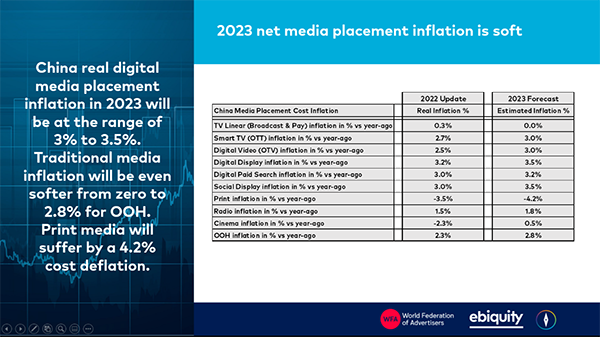 Media inflation in China to remain within 3% in 2023: Ebiquity

Net media inflation for commonly used media platforms in China will remain within 3% in 2023, according to media investment consulting firm Ebiquity China.

The company estimates the Chinese digital media net cost inflation will hover in the range of 3% to 3.5%, while traditional net media inflation is expected to be softer from 0% to 2.5%.

Commenting on the forecast, Stewart Li, Managing Director, Ebiquity China said: “Several global economic institutions have lowered China’s 2023 GDP forecast from 5.3% to 4.5% in September. This has led Ebiquity China to predict another soft year for the advertising industry. Our recommendation for advertisers is to implement a proper media cost management program with their media agencies so that they can negotiate for a tough 2023 media-buying KPI.”

Furthermore, Ebiquity China conceded that 2022 has been a tough year for the Chinese advertising industry due to a restricted GDP growth of 3%. This was largely because of the Chinese government’s imposition of the Zero-Covid policy, where several key cities have experienced extended lockdowns.

As a result, there has been a 10% to 15% (in some case more) cut on media spends by leading advertisers in China. The budget cuts have had a significant impact on both multinational and local media agency groups, with some forced to announce layoffs in 2022.