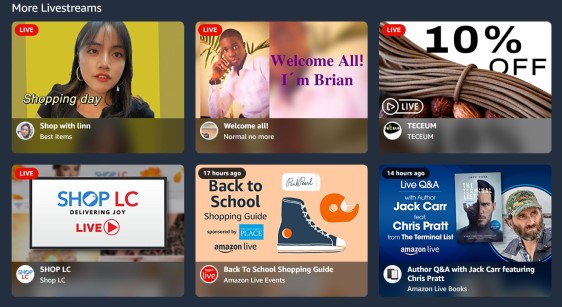 Amazon is ramping up its live online shopping initiative, Amazon Live, running a series of events – at least four so far this year – and offering financial incentives to woo influencers, the Financial Times reports.

The jury is still out on whether western consumers will take to live online shopping with the same enthusiasm as Chinese consumers, where livestreaming e-commerce now accounts for 15% of all e-commerce sales (up from 3.5% just three years ago).

Certainly they’re not following the same model. TikTok has refuted reports it had scrapped European and US expansion plans for its TikTok Shop feature, saying it was focused on getting the UK offering right – the implication being that it hasn’t been able to simply import what works in China.

Amazon, however, has the twin advantages of people coming to the platform already in a shopping mindset and deep pockets to take the time to make Amazon Live work.

Ironically, TikTok could be an important factor in making a success of Amazon Live: TikTok videos tagged “#amazonfinds” (indicating a product has been found on Amazon) have been collectively viewed more than 23 billion times, according to the FT. If Amazon Live can tap a fraction of those views to get people to buy through its own livestreaming channels then it could be onto a winner.

“Amazon has fundamentally changed the game in terms of a seamless and non-sticky shopping experience. Amazon Live is a very smart extension of what’s already been happening in the ecosystem” – Gaz Alushi, President, Measurement and Analytics at Whalar.