Ferrari World Abu Dhabi, Sharaf DG and Lulu Hypermarket are the top three improving brands in the UAE in terms of Ad Awareness for June 2022

In this month’s top improving brand in terms of Ad Awareness, we have Ferrari World Abu Dhabi ranking first followed by Sharaf DG at number two and Lulu Hypermarket in third place. According to YouGov BrandIndex data, which tracks brand perception on a daily basis, these three brands saw the highest increase in Ad Awareness during this period, making them our Advertisers of the Month. 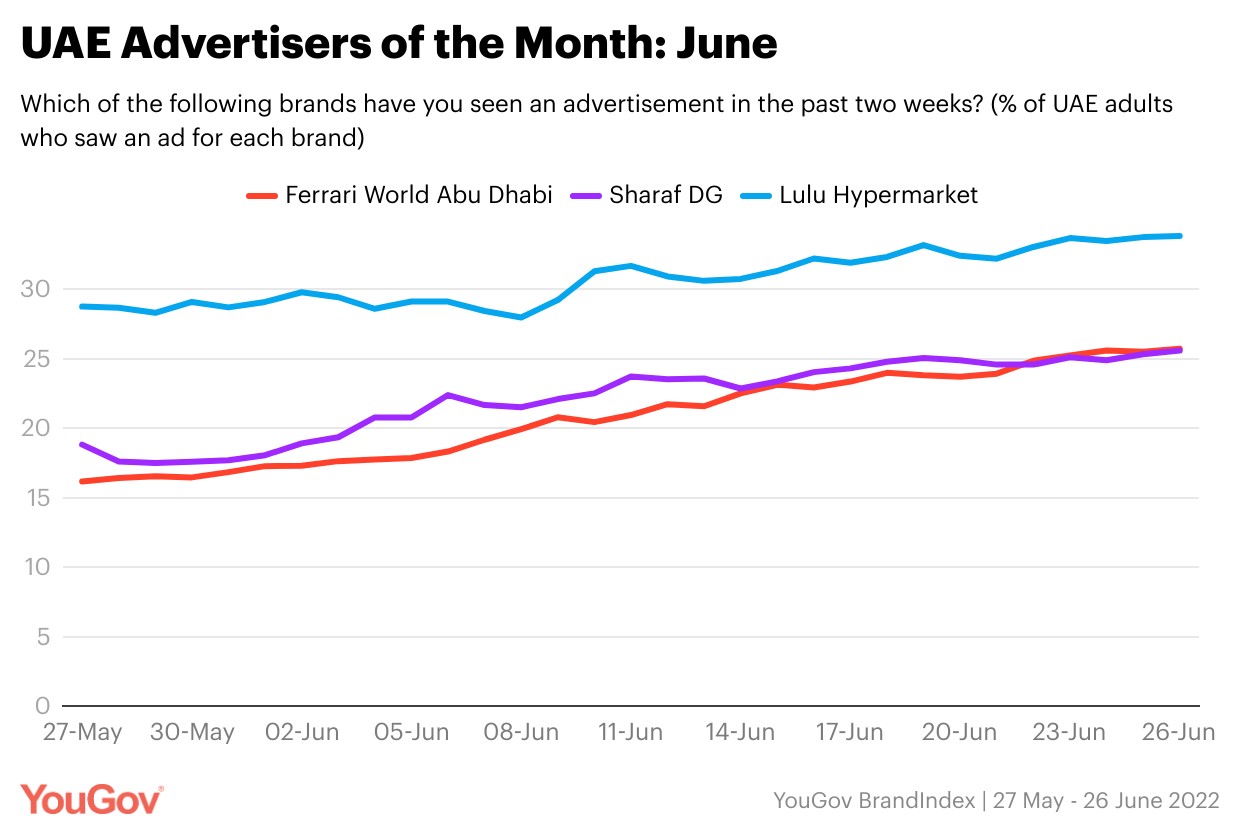 Ferrari World Abu Dhabi recorded a rise of 9.5 percentage points in the past month from 16.1% on 27th May to 25.7% on 26th June. The theme park is home to the world's fastest roller-coaster. The rise in Ad Awareness could be associated with increasing campaigns featuring actor and comedian Kevin Hart who was appointed as the first Chief Island Officer of Yas Island. A rise in Ad Awareness for Ferrari World Abu Dhabi suggests that campaigns launched by them were successful in reaching a wide audience thereby making the brand more visible.

Sharaf DG’s offers and deals seem to have aroused the interest of consumers. Recently they opened their 23rd store at the Dubai Hills Mall, UAE. The tech retailer’s strong brand communication helped boost its Ad Awareness by 8.1 percentage points from 17.4% on 29th May to 25.5% on 26th June.

Lulu Hypermarket saw a rise of 5.9 percentage points from 28% on 8th June to 33.9% on 26th June. The brand hosted some major events last month that appear to have resonated with a larger proportion of the population. They kicked off an ‘Explore Australia’ festival, celebrated Philippine Independence Day with a ‘Pinoy Fiesta’ event and announced plans to reduce their carbon footprint by 50% before 2030.

YouGov BrandIndex collects data on thousands of brands every day. A brand’s Ad Awareness score is based on the question: “Which of the following consumer brands have you seen an advertisement for in the past two weeks?” Data from surveys of adults aged 18 years and above residing in the UAE from 27 May to 26 June 2022. Ad Awareness scores are based on a four-week moving average. The change in scores for each brand is calculated by taking the difference between the highest and lowest scoring days within the period. Learn more about BrandIndex.