It’s been a rough year for Facebook, but the social media mainstay is working to re-establish itself as a friendly, fun place for interpersonal communication. With its new ad, entitled “Here Together,” the brand has seen the highest growth in Ad Awareness of any brand in the last month, according to data from YouGov BrandIndex.

The commercials focus on the “social” element of the platform, with a voiceover declaring “We came here for the friends,” over shots of users’ pictures and profiles. “But then something happened,” the voice announces. “We had to deal with spam, clickbait, fake news, and data misuse. That’s going to change.” 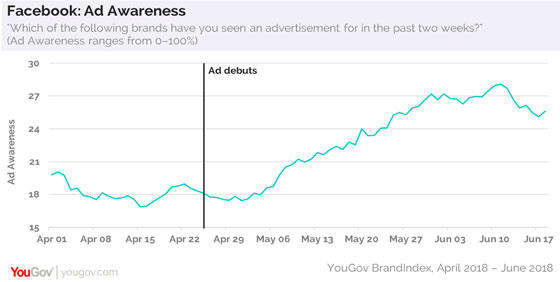 The TV commercials are paired with billboard ads around the country, which promise that the platform is cracking down on things like fake news and clickbait. The campaign kicked off during the NBA Playoffs, and will continue through the summer, with the commercial also appearing in cinemas and on Facebook.