This month, Staples is the brand which has achieved the biggest uplift in its Ad Awareness in the USA.

It’s back to school time for retailers, and Staples has released a new ad campaign on TV and digital entitled ‘Essentials in Stock’. The ads play to those who enjoy a bit of organisation and colour coding, as they show aisles of colour coded office supplies, along with colourful pencils and notebooks dancing in kaleidoscopic patterns.

The narrator encourages the viewer to “let the stress of back to school float away”.

YouGov BrandIndex data shows that the ad campaign has given Staples a boost with consumers. The brand’s Ad Awareness (whether someone has seen an advert for the brand in the past two weeks) has had the largest rise of all brands this month.

At the beginning of July, Staples’ Ad Awareness score sat at +15. By the end of August, the score had risen to +26. The rise was seen across all age groups and regions, and among parents and non-parents. 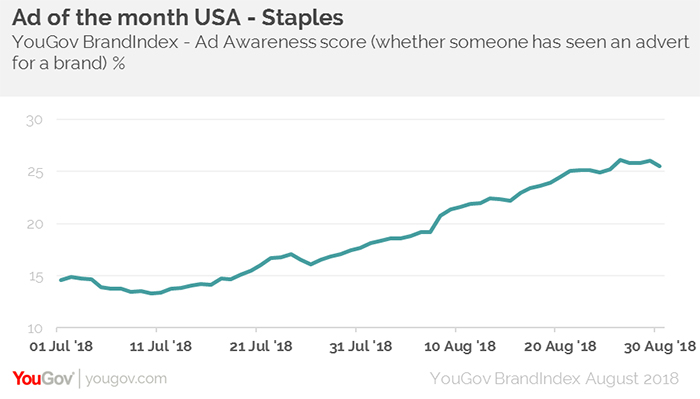 The ads are part of a larger series of “school supply serenity” promotions that the brand are pushing, as the office supply giant faces new competition from online and other bricks and mortar retailers.

However, in this case Staples can be pleased that their back to school campaign has performed well, and the challenge will be to continue raising awareness throughout other periods of the year.