This month, Kay is the brand that achieved the biggest rise in its Ad Awareness, according to YouGov’s Brand Index.

The holiday retail season is underway, and Kay Jewelers has launched several ads to promote their diamonds as the perfect gift. And in the month of November, Kay has seen the highest jump in Ad Awareness, according to YouGov Plan & Track.

On November 1, the brand’s Ad Awareness score – which asks whether a panellist has seen an advertisement for the brand in the past two weeks – stood at 12, but by November 30, it had doubled to 24. 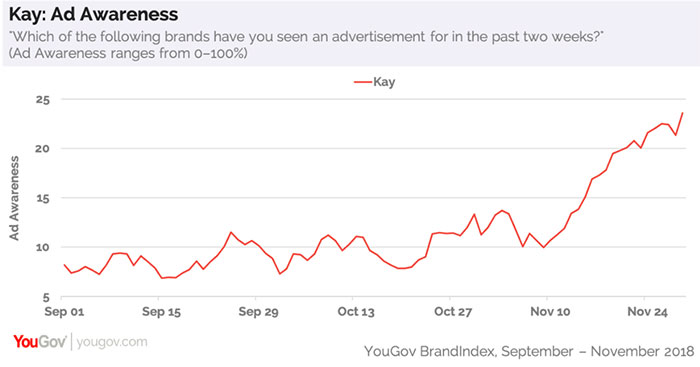 In one, a man informs an off-screen person for permission to propose to a person – only for that person to be revealed as her young son. Another focuses on couples who are also best friends.

The advert has helped garner attention for the brand. YouGov BrandIndex data shows that the company’s Attention score (whether someone has heard something about a brand in the past two weeks) has jumped from +4 to +9.

Further data from YouGov Plan & Track finds that those who purchased jewellery as a gift during the 2017 holiday season were more traditional and family-oriented. 95% agreed with the statement “Spending time with my family is important to me” compared to 88% of the general public. And only 16% of jewellery gift buyers agreed with the statement “Marriage is an outdated institution”, compared to 22% of the general public.

Of course, it remains to be seen whether impressive ad cut-through will coincide with an even great upturn in sales as the big day approaches.