This month, Warner Bros. is the brand which has achieved the highest uplift in its Ad Awareness in the UAE.

On July 25th 2018 Warner Bros. World Abu Dhabi officially opened, and the brand marked the occasion by projecting a display of their much loved characters on the tallest building in the world (the Burj Khalifa).

The three minute show began by stating ‘The wait is over!’ before visuals of the brand’s famous superheroes and cartoon characters covered the building.

The brand’s Ad Awareness score (whether someone has seen an advert for the brand in the past two weeks) has more than doubled, going from +7 at the beginning of July to +15 by the mid-August. 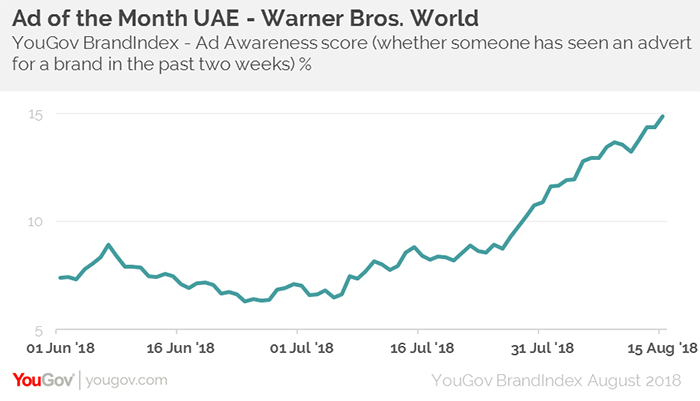 In addition to the light show on the Burj Khalifa, Warner Bros. World have also included expansive out of home advertising across the city, including several billboards. Warner Bros. World can be confident that they are achieving cut through among their likely target audience of parents with children aged two to 12, as among this group, Ad Awareness reached +16 on the 14th August.

As well as raising the brands profile, the campaign appears to have also had an impact on consumers’ purchasing intentions. In the first week of July, Purchase Intent (whether or not someone would be likely to visit) were around +3, but six weeks later this score has also doubled, achieving +6 on the 13th August.

In the coming months our brand tracking data will be able to analyse what success Warner Bros. World has had in its initial few months in terms of attracting customers and more importantly keeping them satisfied. However, for now they will be looking to keep up the momentum from their initial campaign into the coming months.