Recently, I was watching a TV mini-series The Thorn Birds. It was first aired in 1983 on ABC and became the 2nd highest rated TV mini-series in the US in less than 3 days. The series was actually adapted based on Colleen McCullough’s 1977 best-selling novel.

There’s a scene in which Ralph de Bricassart, one of the lead characters talks about belief and faith, saying, ‘Belief doesn't rest on proof or existence...it rests on faith’ This made me think of the attitude we take in proving our work to the clients. Don’t we always try to aim to prove that all our ideas are factual? Our entire advertising ambitions are driven by our ability to satisfy the brand owners how factual our proposition is. And I don’t think, marketers are the ones who should be blamed here. When we don’t add faith to our work, how can we expect them to ask or even think about it?

Do you really think that Jobs calculated all the numbers before re-launching Pixar with Toy Story? In my opinion, it was purely faith – faith in doing something the world would naturally want to be part of. And the learnings suggest, starting with faith is far more profitable than shielding the outcomes with proofs. After all, for his $50 million investment, Jobs made a good $350 million from Toy Story alone.

It gets worse, as it also represents our mind-set to command and control everything about people and how they should respond to our messages. As if they were not humans but advertising driven machines, waiting for a message from us to take the next action in their lives.

When all the time our advertising beliefs are driven by facts and evidence but, not by faith, how could we really convince people about the product they are buying from us is better than the one they could get from our competitor – though both products use the same ingredients? That’s where faith plays in, as people don’t put faith in products, but in something else they are buying those products from – in the world of marketing that thing is commonly known as a ‘brand’. And how can you really build a brand without sharing some sort of a belief beyond reason?

Thanks to the age of data driven marketing the situation is only getting poorer.

Because 30% of the consumers like talking about our category, therefore, this campaign focuses on encouraging people to talk about our products. Or 70% of the consumers are spectators, so we will utilise a network of influencers to spread our messages, and the story goes on and on. For some reason the web is taking the human out of marketing. We must remember though the web is made up of 0s and 1s, - humans are filled with emotions and feelings.

But, please by no means consider that I am suggesting data has no importance or relevance in the world of marketing and advertising. It certainly, has a value as long as it’s delivering insight to craft a solution. The danger is when it actually becomes the solution.

Marketing and advertising has a role to play in societies. And if we continue to create left-brain driven communication solutions, I fear that we will end up creating a generation of consumers that would only believe in facts and numbers. They wouldn’t be buying products, because they put their love and faith in the brands representing them, but based on some mere calculations and evidence. After all, we are training them (consciously or subconsciously) all the time to behave this way.

The question is, why can’t we think of ideas that people believe because they put their love and faith into them, not their left-brains?

Though with this limited knowledge, I carry, I shall not be the one deciding the future of advertising and marketing. But, for now, I settle on a resolution, to prevail with faith beyond reason and discover the meaning of modern marketing that lives outside the 0s and 1s. 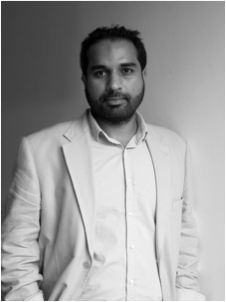