As the first analyses of World Cup advertising roll in, WARC's Sam Peña-Taylor turns pundit with some help from Kantar Millward Brown.

You can’t buy your way to glory in the World Cup. Perhaps that is why it is so so satisfying to watch a well-drilled side made up of second-division journeyman players fell a giant, their wall of fans a twelfth player. Similarly, it appears that the competition’s hefty advertising work, for which both celebrity appearances and humongous budgets have been a hallmark, are no guarantee of landing the right message.

This is according to a new analysis from Kantar Millward Brown, which measured 650 UK consumers’ reactions to the tournament’s ads to examine 12 different dimensions reported on a 1-5 scale. These included: enjoyment, involvement, branding (meaning people will realise what the ad is for), relevance, difference, persuasion and brand love – all factors, the firm says, linked to purchase motivation and long-term brand building. In addition, the research includes findings from facial coding to explore emotional responses.

Indeed, giants fell. Both sporting giants – official sponsor adidas and fan-favourite Nike – performed poorly across these measures. Graham Page, Kantar Millward Brown Managing Director, Offer and Innovation, noted adidas’ similarity to many World Cup ads: lots of celebs and lots of sportspeople. But it lacks narrative, he says: “there’s an MC shouting about creativity, which has no obvious link to the brand.” This is true. I had imagined that Adidas had aimed to ‘own’ creativity and innovation.

It is, perhaps, a symptom of the industry bubble that we are all complicit in building. Qualities that are grand and noble to ad land can be too big to really mean anything in the real world. Page adds, “Facial coding showed that consumers found [Create the Answer] wasn’t enjoyable or relevant, and was actively irritating to some, with a lot of frowns.”

Other poor performers, including Nike and Beats, the audio company, also lacked a narrative – unless you think Harry Kane looking both vacant and determined is a good story. It is worth pointing out that Nike’s Brazil, which is made in Portuguese, is perhaps not designed for a UK audience, though it suggests lacklustre performance outside Brazil.

However, the bigger problem is that they failed to land a meaningful point, Kantar believes. The debate over meaningfulness has mostly entered the boggy waters of purpose, but the Beats Made Defiant example illustrates the most important question that a consumer will ask of advertising: so what?

Brands that scored highly in the Kantar research would invite us to believe that an answer is necessary. Visa’s Zlatan ad was “really well received,” said Page, noting the non-pompous use of a celebrity. It includes a really clever benefit offer, he added. “Contactless payment may not be news, but the telling of the benefit is.” 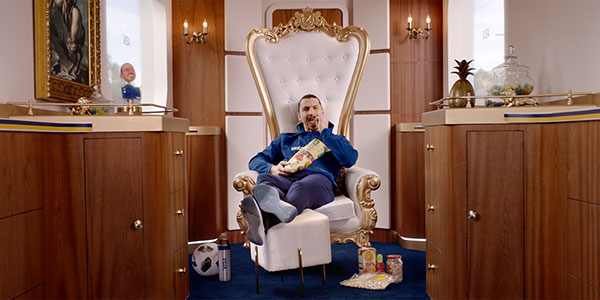 Speaking at Cannes, Visa’s SVP for marketing in Europe, Adrian Farina, said Zlatan’s omission from the Swedish team was useful context that would help push through the clutter. Kantar appears to confirm this. The brand also had a clear and simple objective: “to help fans defy World Cup FOMO.”

Elsewhere, brands like Lidl kept it simple. Lidl’s depiction of England players interacting with kids drew “a fantastic facial coding response”, with appeal for both men and women.

Mars’ Sweetstake, which communicates a simple, straightforward offer in a funny, relatable manner was also a winner. Finally, Coke’s Stock Up campaign showed a real situation in which the brand could play a central role.