Eva McCloskey, from the Academy of Interactive & Visual Arts in New York, discusses the steps being taken by Victoria’s Secret in an effort to make the lingerie brand more inclusive.

In announcing its monumental overhaul from purveyors of sexy lingerie to promoters of female empowerment, Victoria’s Secret chief executive officer Martin Waters talked up the new company goal last month of becoming “the world’s leading advocate for women.” Out were the super sexualized size 36”–24”–36” “Angel” models, and in was a collective of famous women achievers including soccer star and gender-equity campaigner Megan Rapinoe, Sudanese-Australian model Adut Akech, and transgender model Valentina Sampaio.

The move from peddlers of porn-worthy lingerie that defined “sexy” for generations of women to a purposeful and authentic female-centric brand is a lofty goal and a heavy lift for a company that, even when announcing its seismic shift, described itself as a specialty retailer offering, among other items, “panties.”

If the PR department hasn’t gotten the message, I’m wondering whether it will resonate with the rest of us.

Don’t get me wrong. I’m all for the rebrand. But this “about time” moment seems to fall in the too little, too late category, with such an extreme makeover giving off a whiff of disingenuousness. I have no idea what the last internal straw was that broke the Angel’s back, but any one or mix of #MeToo moments, social-justice movements, or dwindling bottom-line financials should have been enough to push the C-suite into this decade.

I’m not saying they can’t do it. Anything is possible with enough time, effort, and money. But Victoria’s Secret is going to need more than just a marketing makeover to affect such momentous changes, which could potentially include overhauling hiring practices, diversity and inclusion programs, creative partners, and even ethical practices when it comes to its overseas panty – I mean product – production.

Victoria’s Secret may face the inevitable charges of inclusivity-washing from some quarters but being out and loud will be the proof they need to show they’re walking down a different catwalk.

Fortunately, there are already some encouraging signs. The seven-member VS Collective, which also includes biracial model and inclusivity advocate Paloma Elsesser and Indian actor and tech investor Priyanka Chopra Jonas, will be more than just the new bodies of Victoria’s Secret. These brand ambassadors will advise the company on everything from product design and offerings to narrative and messaging. In the new chief marketing officer Martha Pease, formerly of the Boston Consulting Group, it has a leader who gets it. And its new board of directors will be comprised almost exclusively of women, and includes Irene Chang Britt, SVP/Global Baking and Snacking, Campbell Soup Company, Jacqueline Hernández, former chief marketing officer, Hispanic Enterprises and Content, NBC Universal and Lauren Peters, former chief financial officer, Foot Locker.

The makeover is already proving popular with younger consumers. A recent Ad Age-Harris Poll found that almost half of millennials said the brand was outdated, but 52% say they’re more likely to patronize it with its new marketing strategies geared toward inclusivity and empowerment.

But the company needs to take its old base – which helped make it a $7 billion business pre-pandemic – along on its seismic shift. It also needs to onboard demographics long excluded from its myopic purview, from pregnant and nursing women to older customers. It’s great that for the first time this year, Victoria’s Secret featured a pregnant model in a Mother’s Day campaign. It would also be nice to see one member of the Victoria’s Secret Collective over the age of 50. That’s an easy one, and hopefully among the next batch of fixes.

Some will be easier to activate and attain than others. Credibility and trust take time.

The ease with which the Angels are being swapped out for a more representative cross-section of womanhood itself smacks of cringe-worthy sexist practices. Their dispensability is an unfortunate side effect of what they’ve represented for so long: since they were never treated as real “women,” it’s proving easy to throw out the baby with the bathwater.

Maybe the most promising sign of a real shake-up is that Victoria’s Secret is breaking with parent company L Brands and expects to be a standalone company by summer. Severing ties with a company headed by #MeToo movement poster boys Leslie Wexner and Ed Razek, the former linked to sex offender Jeffrey Epstein, and a well-documented misogynist corporate culture, is the only way to move away from “panties,” feathered boas, and Angels.

With declining sales over the past year, Victoria’s Secret would do well to cash in on the undergarment diversity and comfort cravings of lockdown loungewear that have buoyed the competition. For the brand to be authentic, it must embrace every woman, understanding that we are all a mix of the sum of our parts. I, for one, want a bra that supports me when I work out and another that makes me feel sexy peeking through my blouse. A thong that doesn’t show a line and full-size, comfy undies too. Here’s hoping the new Victoria’s Secret will deliver. 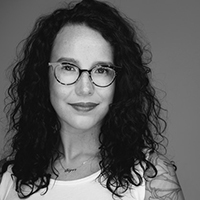 Eva McCloskey is Managing Director of the Academy of Interactive & Visual Arts in New York.
Get a demo
Topics
Send feedback