Innovations push into new areas, but finding rich sources of opportunity is difficult – Lloyd Scott, of Frontier, explores how these areas may lie in the unspoken, in taboos.

Innovation is now so closely associated with what’s new in data-driven technology and AI that we risk losing sight of the potential that rests with innovating around behaviour. This is especially the case as younger generations become more fluid in their beliefs and as the established rules loosen, providing a clear window of opportunity for brands.

We must not lose sight of the fact that technology is not synonymous with, nor a pre-requisite for, innovation. As brands formulate their plans for 2020, one strong people-based innovation is to put taboos at the centre of your thinking.

This isn’t necessarily a new idea. There’s a long history of forward-thinking brands, including Kimberly-Clark’s Kotex, that emerged from a willingness to break taboos. Kotex was developed after World War I when its owner was left with large stocks of a new cotton-like material developed from wood pulp for use in gas masks and field dressings. Listening to the voices of women clinicians in the field, who said the material was useful when they had their period, the company addressed the taboo around periods to manufacture Kotex as the first commercially available sanitary towel in 1919.

These days, when we think of taboos, it’s often in terms of the darker side of life: like sex, drugs, or violent crime. But there are many softer taboos in society that could play to the strengths of a whole range of consumer brands.

Taboo topics are always closer than you might think. Take money, for instance. People don’t like talking about the details of their financial situation with even those closest to them. A taboo that Lloyds Bank built a whole consumer campaign upon, with ‘The M-Word’.

Divorce is another taboo subject that is beginning to be seen as a business opportunity. Services like It’s Over Easy address the taboo nature of divorce head on, and provide solutions that help couples through the emotion, complexity, and expense of the process.

With brands’ relentless pursuit of relevance, why not get ahead of what’s relevant and aim at what normality might become.

The main barrier to using taboos to inform innovation strategy is often reluctance and a lack of bravery within organisations. Although it may be easier for some brands, which by their nature operate in taboo areas, the ones that have got it right clearly demonstrate the benefits of taboo-based innovation. The recent success of the Bodyform/Libresse ‘Viva La Vulva’ and ‘Blood Normal’ campaigns is a prime example – in this case celebrating women’s genitalia and fighting back against period blood shaming. The brand’s achievement in driving awareness is something from which even those in non-taboo categories can draw inspiration.

It’s promising to see brands already moving in this direction, and as taboos on femininity continue to erode, hopefully more brave business decisions will follow. Menopause, and choosing to remain child-free, are just two examples of conversations in this arena which are building traction, and would hugely benefit from the support of relevant brands, which are not only willing to take a stance on the topic, but be there to cater for a new set of consumer behaviours. This isn’t about being tokenistic, relevant or in the news, it’s about making sure you maximise the commercial opportunity by being there for the ever-evolving needs of your audience.

Taboo topics should be explored as opportunities for product and service innovation, as well as for brand communications, simply because they often offer a space uncontested by competition. Before Ralph Lauren entered the fashion industry in 1967, designer menswear was limited and bland, and the industry put all its focus on women. Lauren’s identification of this white space led to the growth of the designer menswear market – now so prolific that it’s expected to outperform women’s fashion between 2017 and 2022, with sales expanding by 2 per cent each year.

How do we apply this thinking? Take luxury watchmaker Patek Philippe, which launched its famous advertising line, “You never actually own a Patek Philippe. You merely look after it for the next generation”, in 1996. A good example of a communications platform based near a taboo subject (the watch owner’s eventual death) but this could also be a great opportunity for the brand to naturally extend further into this area with new services. Could Patek Philippe open up the conversation more broadly by building after-death packages - such as will writing and funeral planning - to service their customer with the same high quality as their watches?

Whatever the brand or category, the key to moving forward with this is not to be afraid. It’s not necessarily about associating with dark, extreme taboos. Just look at your product, who you’re selling to, and ask what people aren’t comfortable with. Then ask yourself if you have the courage to go there.

Lloyd Scott
Frontier (part of The Beyond Collective) 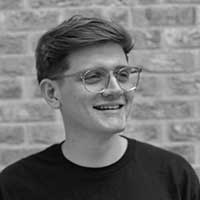