WARC’s latest Global Ad Trends, a monthly report which uses the latest evidence to highlight trends in media investment, has found that the internet ad market is in decline beyond the Google and Facebook ‘duopoly’.

WARC has researched trends in advertising and media investment for almost 40 years, working directly with media owners, industry bodies and/or monitoring organisations in each of the markets included in the report.

Our approach to forecasting encompasses three main areas. Firstly, WARC uses modelling techniques based on media owner revenue for 12 key markets (which between them account for three quarters of global advertising investment), in much the same way as we do for the UK as part of the AA/WARC Expenditure Report, which is regarded as the ‘gold standard’ of industry measurement.

Secondly, these projections are squared against qualitative research, including annual CMO feedback in WARC’s Marketer’s Toolkit and Mobile Marketing Surveys, and our Global Marketing Index, a monthly barometer of practitioner sentiment towards trading conditions, budgets and staffing.

Finally, we draw a consensus from local media agency intelligence and factor this in on a weighted basis. The projections also account for future variance in exchange rates, and our underlying model balances local currency buys against Purchasing Power Parity (PPP) units from the International Monetary Fund, so as to identify the core growth trends. 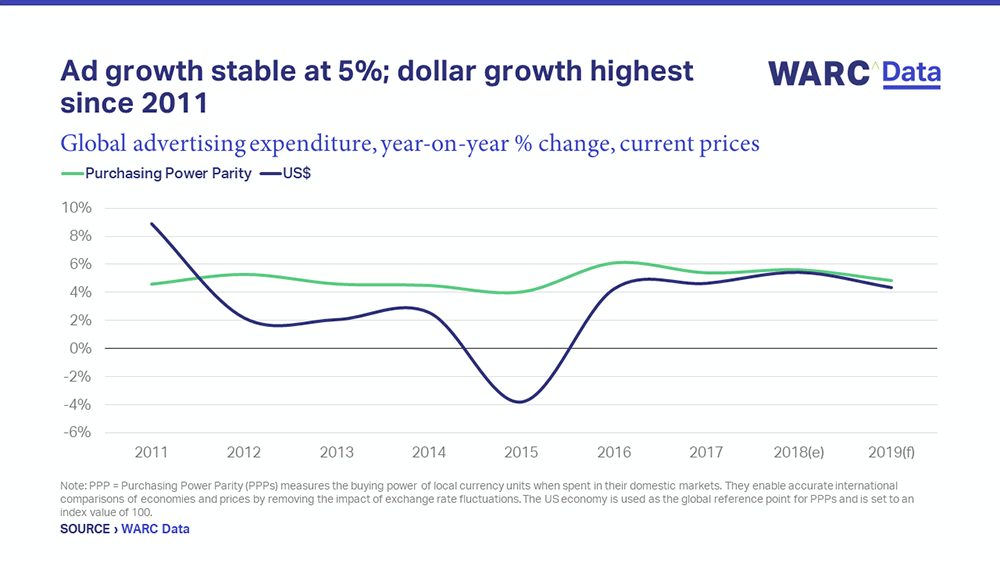 Our latest projections show that global ad market growth has been stable since 2011, with advertising’s share of GDP holding steady at 0.59% on a PPP basis in real terms (or 0.70% in dollars). But while the market is expanding steadily, the undercurrents have shifted dramatically in recent years.

Rise of the machines

Internet is the driving force in global advertising growth, with the vast majority of online trade now automated. Ancillary research by Zenith shows that programmatic buys will rise to account for almost two-thirds of online display adspend this year. This is in addition to paid search and social media, which are programmatic by design.

The ease of ad buying is in part a driver for an expected 12.1% rise in internet adspend this year, to $287.4bn worldwide. This would give internet a 46.7% share of media spend globally, but in the US – the world’s largest ad market – internet is expected to account for over half of all media spend for the first time.

Comparison of company reports with WARC’s media spend projections shows that the amount of internet ad money available to online platforms beyond Google and Facebook may decline in 2019, by a forecast 0.7% to $111.0bn. Conversely, this duopoly’s ad income is forecast to rise 22.0% to $176.5bn, or 61.4% of global internet adspend.

The calculation assumes Google paying $32bn in Traffic Acquisition Costs (TAC) this year. This is money paid mostly to Google Network Members – companies which host Google ads on their own websites. Google’s TACs amounted to $26.7bn in 2018, itself a rise of 23.3% from 2017.

For online businesses not working with Google, the amount of ad money available to them after the duopoly’s take is expected to dip 7.2% to $79bn. This follows an estimated 3.4% annual fall in 2018 – a first for the market. Legacy news publishers in particular are feeling the impact, with many looking to diversify their businesses to make up for lost ad revenue (which has more than halved since 2009). But the squeeze is being felt elsewhere. Already this year, 2,200 job cuts have been announced across digital publishers, including Vice Media (10% of its workforce), Oath (around 1,000 employees), and BuzzFeed (200 staff, including half of UK editorial).

Traditional media still accounted for the majority of global advertising spend in 2018, at an estimated 56.6% – or US$334.0bn – though their collective share has declined by an average 3.7pp each year since 2011.

Much of the downturn can be ascribed to rapidly decreasing print spend, with publishers having been severely hit by the migration of ad dollars online. Excluding print, traditional media’s share of global advertising spend has dipped 1.3pp each year to 45.9% in 2018.

Despite the loss in share, adspend growth has remained rather stable among traditional media excluding print, rising by an average 2.7% each year between 2011 and 2018 on a PPP basis. Annual growth for this grouping is expected to be 0.4% this year, though this equates to a 0.4% fall in dollars.

Globally, TV will remain the largest single advertising medium in 2019, attracting a forecast US$195.5bn, though this represents a 1.3% dip from 2018. Despite this, TV spend will have grown 0.4% each year on average since 2011. TV still delivers the highest return on investment (ROI), and drives the most profit, though its effectiveness may be undervalued in 2019.

The out of home (OOH) sector is benefitting from the increasing penetration of digital sites in advanced markets. Indeed, digital out of home (DOOH) is expected to account for all of the OOH industry’s growth in the coming years (as it already does in the UK).

Elsewhere, radio adspend is forecast to grow 1.0% to $32.5bn this year, following on from a 1.2% rise in 2018. Cinema is expected to be the only ad channel other than mobile not to lose share of global advertising spend this year; cinema spend is expected to rise 7.7% to $4.7bn.