Last week we released our International Ad Forecast for December, outlining expectations for advertising expenditure in 12 key markets across 2014 and 2015. We anticipate growth in global adspend of 4.8% in 2015, a downgrade of 0.5pp since our last forecast in June. This follows expected growth of 5.5% in 2014, which is on a par with our previous outlook.

There are a number of reasons for the revision to next year's growth expectations, but chief among them are a variety of risks to the economic growth within our key markets, including stagnation in the eurozone, an economic slowdown in parts of Asia, and continued tensions surrounding Ukraine.

The 2015 outlook for all our key markets – with the exception of India and the UK – has been downgraded from June. However, all 12 markets are predicted to record an increase in overall advertising expenditure next year at current prices, although in real terms – after factoring in inflation – only half of these will demonstrate growth. 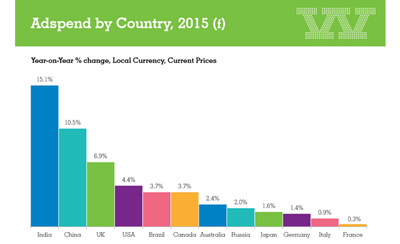 India should see the fastest rate of annual growth in 2015 at 15.1%, with adspend totalling some US$6.2bn by year end. China, the world's second-largest ad market, will also demonstrate double-digit growth next year, with advertising revenues likely to come in 10.5% higher than in 2014 at US$56.2bn.

Of the more established markets, the UK is expected to post growth of 6.9% in 2015 following an estimated 7.2% increase in expenditure this year. Such growth will result in total advertising expenditure coming in just shy of £18bn ($29.6bn) next year. Turning to the US, the world's largest advertising market, growth of 4.4% next year will take total spend to $174bn, overtaking 2007's pre-recession peak of $168bn for the first time. 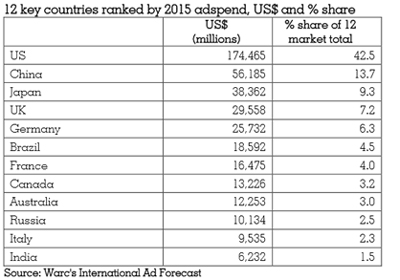 In terms of adspend by medium, we expect some significant shifts in the allocation of budgets in 2015. For example, one in every two dollars spent on advertising in China will be via the internet (including mobile). This echoes the wider trend of internet accounting for over a third of global adspend next year, up from a share of 9.2% in 2006. By contrast, spend across print media more than halved over the same period. Only TV has sustained its strength over the decade [for a traditional medium], and is set to remain the largest adspend channel in 2015, taking a global share of 37.1%, up from 35.7% in 2006.