Coca-Cola, ITV Hub, and Baileys made the biggest gains in Ad Awareness in the UK for the month of December 2022.

According to data from YouGov BrandIndex – which monitors consumer perceptions toward brands daily – Coca-Cola saw a rise of 19.6 points in its Ad Awareness* score during December. It jumped from 19.5% on November 26 to 39.1% on December 25.

After being cancelled in 2020 and having a subdued run in 2021, the Coca-Cola Christmas Truck Tour made a comeback for the 2022 Christmas season along with the brand’s iconic ‘Holidays are coming’ ad spot. Following this year’s theme of ‘Your Presence is Your Present’, Coca-Cola Great Britain, in partnership with charity network FareShare, announced they would donate the equivalent of 100,000 meals – one meal for every person who attends the Truck Tour – to those experiencing food poverty. In an effort to take the total funding to 200,000 meals, Coca-Cola Europacific Partners kickstarted the initiative by donating the equivalent of 100,000 meals to FareShare. This holiday season also marked Coca-Cola's first-ever partnership with the Royal National Institute of Blind People and NaviLens in a bid to make its promotional Christmas packaging accessible for blind and partially sighted people. 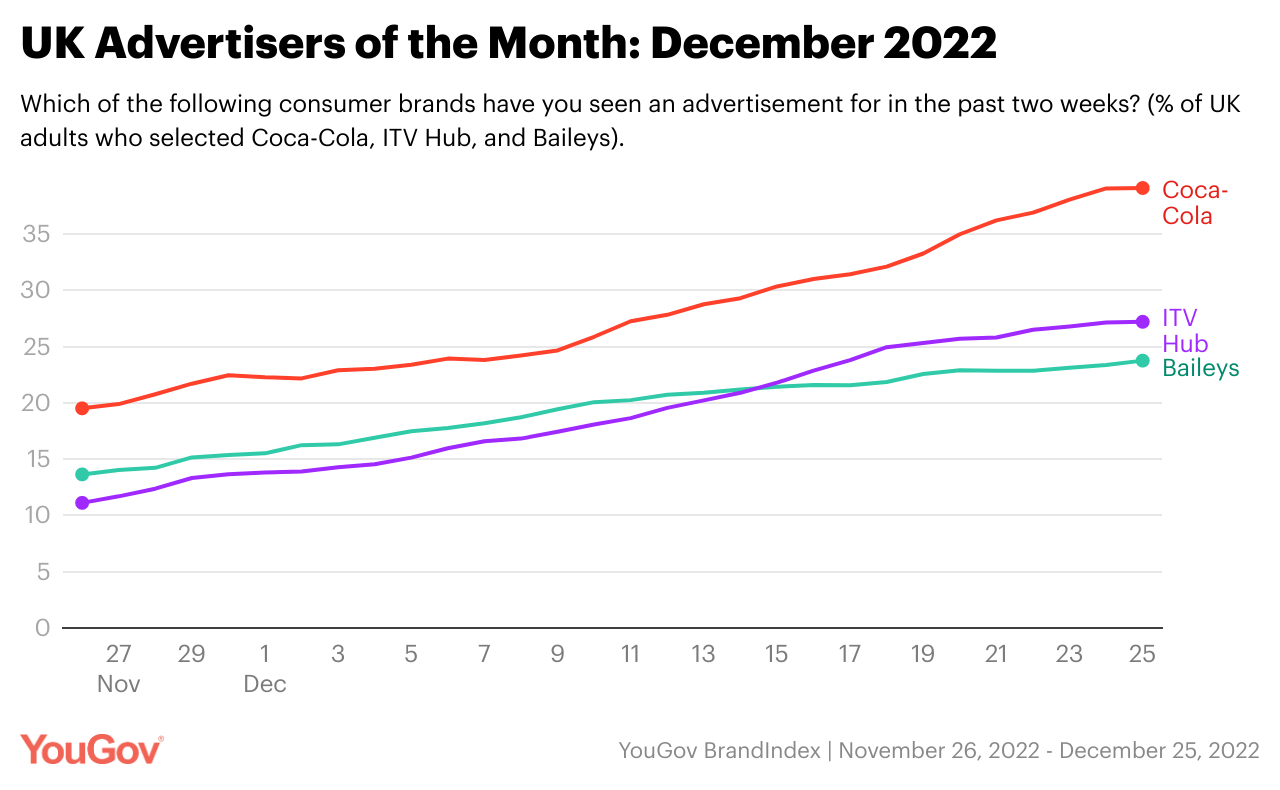 Video-on-demand service ITV Hub saw its Ad Awareness score improve by 16.1 percentage points. Its score rose from a minimum of 11.1% on November 26 to a maximum of 27.2% on December 25. December saw the official launch of ITVX, ITV’s much anticipated integrated advertising-funded and subscription video-on-demand service which now replaces ITV Hub as the home of all ITV online content. Building on the momentum created by the Uncommon Creative Studio ad spots starring multi-award-winning actors Helena Bonham Carter, Matthew Macfadyen and John Boyega, the ITVX launch was accompanied by a multi-channel marketing campaign.

The campaign features innovative partnerships to bring the AVoD-SVoD service alive, including a unique branded metaverse experience in Fortnite Creative that allows players to step into new ITVX-themed worlds. Devised by ITV-backed Metaverse studio and agency Metavision, this experience was launched and promoted by popular YouTuber Ali A. Other brand activations include ITVX bus wraps with LED lighting across major cities in the UK and a special outdoor build by Kinetic, ITV creative and Taylor Herring at London’s Victoria station.

Rounding up the top three Advertisers of the Month for December 2022 is Baileys. The Irish cream liqueur brand saw its Ad Awareness score move up 10.1 points, from 13.7% on November 26 to 23.8% on December 25. This Christmas, the popular Baileys Hot Chocolate Bombes returned for a second year, along with a Baileys Chocolate Collection – in partnership with Irish chocolatier Lir Chocolates – exclusive to supermarket chain Sainsbury’s. The lead-up to the 2022 holiday season also featured a whimsical ad for Baileys infused hot chocolate and innovative Baileys-inspired Christmas recipes on the brand’s website.

* A brand’s Ad Awareness score is based on the question: “Which of the following consumer brands have you seen an advertisement for in the past two weeks?” Data from surveys of adults aged 18 years and above residing in the UK from November 26 to December 25, 2022. Ad Awareness scores are based on a four-week moving average. The change in scores for each brand is calculated by taking the difference between the highest and lowest scoring days within the period. Learn more about BrandIndex.