Brands can side-step the distractions of the world by finding the perfect media partnership to garner genuine participation.

The attention economy has almost become a cliche. The fight for eyeballs against Netflix and current events is what brands have always battled against. Just now that fight is on steroids.

But what we’ve learned is that attention is nothing without affection.

According to WARC’s 2020 Health of Creativity report, an analysis of the most awarded ideas from 2015-2018, emotion was found to be especially effective for two types of campaigns (as identified by The Creative Effectiveness Ladder) – those designed to change consumer behaviours and those designed to build brand health.

And because evidence suggests that positive interactions with brands and products drive emotional equity, the importance of customer participation has never been more important.

So perhaps, in between global dumpster fires and the next HBO series, the real question every brand owner needs to ask themselves is: how do we get people involved with our brands?

This year, many of the WARC Media Awards Partnerships & Sponsorships winners showed how to spur people into action. How to side-step the distractions of the world, by finding the perfect media partnership to garner genuine participation.

Although there are countless ways, here’s three ways the best cases in 2020 did it.

If you want people to spend time with your brand, be a brand that invites play.

Tesco’s Bringing back Supermarket Sweep is the perfect example.

Tesco’s nostalgic take on much-loved 90s TV game show Supermarket Sweep, in partnership with ITV and Thames TV, turned a value message into entertainment. But it was more than its great re-creation of the show, rather its extension into social that transformed what could have been a passive piece of comms into a platform for participation.

Its social media activations and Snapchat game allowed viewers to play at home on their phones. The fact that the Snapchat game was played by over seven million people is astounding. So it’s not surprising, with participation figures like that, that the game alone was attributed to a 7% increase in the value perception of Tesco.

But you don’t need to recreate a whole TV show to invite play. Play as participation is about capturing the active attention of your audience, and there are no hard and fast rules for that.

Lloyds Bank’s new app wasn’t getting used by its older customers. And as the brand’s model changed towards a more digital ecosystem to fend off the rise of neo-banks, it risked losing these valuable boomers. When all the traditional communications couldn’t get these affluent boomers to download the app, it turned to a 15x15 square printed crossword.

By partnering with The Daily Telegraph, Lloyds created a series of crossword-style ads that revealed the app’s handy features as answers. And what’s remarkable is that this old-world game spurred nearly half (44%) of those that participated to download the app. Nearly half!

Never underestimate the power of play in shifting the way people think and act.

When people are too busy with life, the best thing a brand can do is to help them do the things that matter. Be a brand that’s uniquely useful by partnering with other useful players.

One of the best examples of participation as utility was Babyshop and its Gift of Mom campaign.

The children’s retailer out of the United Arab Emirates turned Mother’s Day into something considerably more meaningful and useful. In partnership with medical centre Aster Clinic, Babyshop gave every female shopper a free mammogram. It also partnered with taxi companies to offer women a free way to get to their check-up.

By turning a retail occasion into a useful way to help mothers look after themselves, Babyshop not only generated great earned media and a rise in store traffic (up by 23%), it also saw brand affinity rise by 26%.

And most importantly, check-ups at Aster Clinic rose by 63%.

If you’re in search of ways to create participation as utility, find partners that make life better, and see how your brand can amplify that.

Lastly, a brand can design participation as something utterly desirable. Something that feeds into the aspiration of their audience.

Take for example, Old Spice and its Guest Starring campaign.

Even after a decade of running one of the most recognisable campaigns around the globe, Old Spice was yet to launch in Israel by 2019. Instead of creating another traditional campaign, the brand transformed the original ‘man on a horse’ into a vehicle for YouTube co-creation.

Not only did Old Spice continue to leverage a powerful brand asset, it also understood how its target audience of young men think. By creating a repository of short scenes starring Isaiah Mustafa, local creators could integrate the footage into their own YouTube videos, with the promise of heavily promoting their content.

This partnership with Google understood that people are willing to participate with brands if it helps them realise an aspiration. Here, this aspiration was fame.

If you understand your audience well enough to know not only what they need, but also what they want out of life, then your brand has a bigger role to plays. This breeds participation and advocacy. Find a partner that can help deliver that.

In a world where people are too busy to give your brand attention. Don’t disrupt. Invite.

Find partnerships that spur participation by creating opportunities to play, by being useful or by feeding their aspirations. Find partners that already have meaning in your customers’ lives, and add value by being more entertaining, more practical and more exciting.

This is how brands win in this economy of constant distraction. That, or partner with a streaming service and create the next Tiger King TV show. 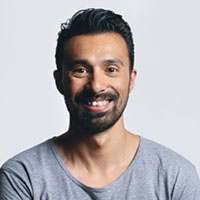 Danish Chan is a co-founder and strategy director at untangld.
Get a demo
Topics
Send feedback