SXSW Interactive is one of marketing and tech's biggest trade shows, with over 30,000 attendees.(Warc was there this year too, and you can read our reporting from the event here.) But, of course, not everybody who wants to go, gets to go. Luckily, the Global Academy of Digital Marketing (GADM) and Karmarama, the creative agency, was on hand with a London-based event of its own, SXSW Hangover, that was held in London last week and recapped some of the festival's big themes.

SXSW (pro tip: it's pronounced "South by") used to be a "place where you launched products", but now it's "a place where you launch big ideas", said Lawrence Weber, the agency's managing partner. The Austin, Texas-based festival is famed for introducing Twitter to the world in 2007, after all. So it's no surprise that many of the marketing industry's biggest ideas dominated the SXSW stage this year.

Brands presenting in Austin included Heineken, which discussed its recent experiments with proximity marketing, using tools such as beacons and NFC to reach out to potential customers as individuals. Meanwhile, Mondelez, the food giant, is getting deeper into personalization, offering customized versions of its iconic Oreo cookie.

Peter Dolukhanov, Karmarama's CTO, who attended SXSW, also noted the personalization theme. "It's 'cognitive data'," he told the audience. "If you have the data, the key thing for brands is to create a useful, personalised platform."

For example, IBM, the tech giant, had a mini-event at SXSW offering a "personalised" experience to attendees. For example, once in the space, and having shared some personal data with IBM's super-computer Watson, attendees could drink a cocktail made according to the information they shared. Or, if they visited the cinema on site, they were screened TED Talks selected to appeal to them. "It's an extreme example, but can really show you how brands can personalise what they offer you," Dolukhanov added.

New communications models were also a major focus of the festival. One of the hottest tickets in town was for a presentation by Stewart Butterfield, founder of Slack – the famed "email killer" messaging app/sharing platform that has transformed how many workplaces talk to each other. Though, for such a future-facing brand, its advertising is strikingly traditional. The company ran its first ad campaigns in 2015, including vibrant out-of-home messaging and irreverent TV commercials. 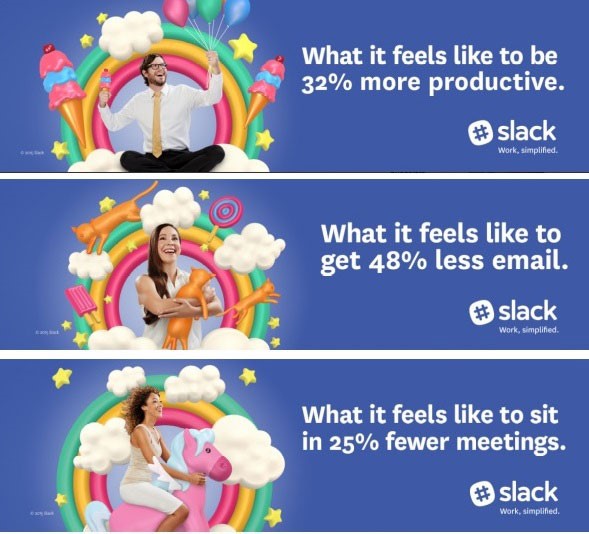 Slack also abides by similar effectiveness metrics and principles as other, more traditional, brands. "It's a hope that paid advertising will be an effective means of driving growth," Butterfield said at SXSW. "And the good thing about advertising is it's very scalable. You can just add more money and you get more results. When you want to stop, you just stop."

Speaking at the Karmarama event, Tia McPhee, head of brand at BBC Worldwide, the commercial arm of Britain's public service broadcaster, noted new distribution models she had observed at SXSW.

"Lots of live-streaming services have sprung up," she said. One that had caught her eye is YouNow, which is a community-based video-streaming platform that allows creative people to broadcast to fans and followers.

For example, a songwriter can play a work in progress to their YouNow audience, chat to them, and get tips on how to improve their song. "People are actually making a good living from this, one 15-year-old gets $2,000 per month from it," McPhee said. "People don't want a YouTube experience with all the horrible comments: they want something smaller, a chat, a community."

McPhee also checked out the various VR products on show at SXSW, with McDonalds and Samsung among the big brands moving in to this space. The electronics brand was promoting its Samsung Gear VR headset with a "rollercoaster" live on site, duplicating the experience of two of the rides at the Six Flags theme park – which, McPhee said, proved very popular. "People really enjoyed it and wanted to be there, so that's all fits into the question about why brands should be into VR, too."

Four tips for next time

The Karmarama panel of seasoned "South by" attendees had a few tips for people wishing to go in future.