It's impossible to have missed the exponential rise in the popularity of instant messaging apps over the last couple of years. A quick glance at the apple app store reveals WhatsApp sitting proudly at the top of the free apps, with Facebook messenger and Snapchat in third and seventh place respectively. In addition to these well-established products, there are a number of emerging apps such as Kik and YikYak which are starting to attract the attention of young users and brands alike.

It is the age profile of users of these apps that is particularly interesting to marketers and brands as they have seen aggressive growth among young users. WhatsApp is a slight anomaly as it was the first messaging app to gain widespread traction and it was seen largely as a replacement for text messaging, while circumventing costly international SMS fees. To this end, it has become popular across the whole spectrum of smartphone users. Snapchat is the most interesting of these apps as it has appeared comparatively recently and has quickly gained popularity amongst young consumers. According to GlobalWebIndex statistics, more than half of Snapchat's users are aged between 16 and 24. In addition, there is evidence to suggest that this age group is favouring the use of these closed platforms ahead of more traditional, open social platforms such as Twitter and Facebook. 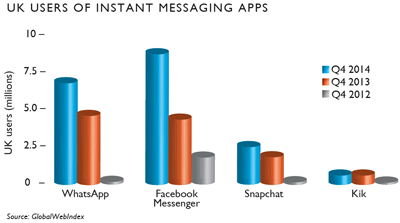 It is the latter point that provides challenges for brands. Whereas it is relatively easy to access Twitter data and track and interpret conversations taking place around brands on this platform, Snapchat and other messaging apps do not allow access to user-generated content, making it impossible to track consumer sentiment and reaction to products and services. Privacy is one of the key considerations for these platforms. Indeed, following the announcement that Facebook would be making its full 'firehose' of data available through Datasift, the company made it clear that this would only include people's statuses and that all messages in Facebook messenger would remain private. This is going to be an interesting area of development over the next few years as the demand for access to this data, and the potential profits available to companies such as Snapchat for making it available to brands may well drive innovation and change in this area.

All of this does not mean that there has been a lack of activity from brands on Snapchat trying to reach this young demographic of users. Snapchat has been working hard to promote its 'discover' feature which makes it easy for its users to view top news articles and videos. It has also partnered with a host of large media organisations including DailyMail.com, Vice, CNN and Cosmopolitan. In addition to this, the app has begun to run ads with the first appearing last October (a trailer for the horror film Ouija being the first). There is clearly massive monetisation potential for Snapchat and this has led to a valuation around the $10 billion mark. However, the app will do well to ensure that it stays true to the features that have made it so popular in the first place. In a recent GlobalWebIndex survey, 69% of teens said that the main reason that they used the app was because it was 'fun to use'. Other key considerations that this audience like is that, 'all of their friends are on it' (62%) and because it's free (54%). There are hundreds of tales of tech companies who have failed to turn initial popularity into long-lasting success. Keeping the attention of its young, notoriously fickle audience will be key to Snapchat's future success. In addition to this, the app must try to appeal to a wider demographic and increase its presence in a wider range of markets (currently the UK, Ireland, Sweden, Canada and the US are the only markets where more than 30% of 16- to 19 year-olds use the app). There is no shortage of competitor apps looking to pounce on any perceived weaknesses with rival Kik recently announcing a partnership with MTV. This is a clearly a very competitive market and one which marketers must monitor closely to ensure continued success in reaching target audiences.