As France prepares to limit the use of illuminated advertising in an effort to reduce the nation’s energy consumption, branding and print operator Solopress takes a look at the real cost of digital signage and makes a case for old-school print.

Digital signage has long been considered the future of advertising, opening doors to new and inventive ways of selling products. Across the UK, a growing number of electronic advertisements have been appearing at bus stops, town centres and shopping complexes. Though there’s no denying that these installations have numerous strengths, their environmental cost has not yet been fully assessed.

We’ve taken a look and here’s what we’ve found.

With digital signage increasingly appearing across the UK and wider world, concerns are growing about the electricity required to power the signs. AdBlock Bristol found that one double-sided digital advert screen in central Bristol required more electricity to power for a full year than the equivalent electricity usage of four homes. The digital adverts in question run 24 hours a day, 365 days a year, for a total of 16,819kWh.

Often, proponents of digital signage quote the green characteristics of the LED bulbs used, particularly when compared to the inefficient traditional lamps used to illuminate static signage at night. However, a 14’ x 48’ LED sign can have between 900 and 10,000 diodes, which in turn may require dedicated air conditioning to ensure consistent performance.

There are measures that digital signage users can take to reduce their energy consumption – screens with an Energy Star are 18% more efficient than those without. Despite this, the fact remains that traditional posters and print advertising are far more carbon-friendly than their digital counterparts.

The increasing usage of digital signage and billboards has also been accompanied by worries over their impact on the immediate environment. Global light pollution is increasing by 6% each year, with the constant light emitted by digital ad displays a cause for concern.

Researchers believe that light pollution not only dims the night sky, but also affects human health and animal behaviours. It’s a widespread problem that 24/7 digital signage is contributing to – 88% of Europe experiences perpetual twilight, with the night sky constantly obscured by artificial light.

This statistic brings into focus recent French legislation, which proposes banning illuminated advertising between the hours of 1am and 6am in order to reduce the carbon footprint of digital signage. We as a planet should collectively be doing everything we can to limit light pollution, and new digital signs are not helping the cause.

One of the key arguments for moving away from traditional printed display adverts is the cost of production. With many corporations advocating for a paperless future, some are concerned about the environmental cost of producing the required paper.

However, if the raw materials used to make paper are sustainably-sourced, then paper can be seen as a renewable resource; in 2020, 56 million tonnes of paper were recycled across Europe, a rate of 74%. On top of this, recent innovations have drastically reduced the amount of water used in the production process, ensuring that 93% of the water used can be returned to the environment.

The environmental impact of producing a digital advertising screen, however, continues long after the lifespan of the screen has finished. According to 75Media, the screens face recyclability issues that are unlikely to be overcome soon, given that the ads are produced using components that turn into e-waste once the unit no longer functions.

As per environmental non-profit Two Sides, ‘raw materials from digital equipment, servers and power generators’ are finite, precious, and non-renewable, and in 2019, the world’s e-waste totalled 53.6 million metric tonnes, a figure equivalent to the weight of 350 cruise ships. As such, traditional printed display ads offer much more sustainable production and reproduction processes than digital signage.

Now, this is not to say that digital signage has no redeeming qualities – in fact, the concept opens doors to a realm of exciting new possibilities for advertising. But as the presence of digital signage expands around the world, many people are perhaps unaware of the long-term environmental impact of producing, operating, and recycling these machines.

Glen Eckett, Head of Marketing at Solopress, comments: “Given the environmental implications, it is disappointing to see so many city planners opting to replace traditional printed posters and adverts with electronic alternatives. In today’s climate of environmental responsibility, everyone should be aware of the excessive electricity used by digital signage, and factor that into their decisions when choosing between digital and printed advertisements.” 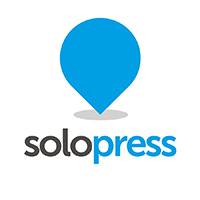