The New Yorker's media writer, Ken Auletta, has written a book about advertising in the 21st Century. Here, WARC's US Editor, Geoffrey Precourt introduces us to some of its characters.

In June, Penguin Books will publish New Yorker author Ken Auletta's Frenemies – The Epic Disruption of the Ad Business (and Everything Else).

In April, agencies had their chance to sweat bullets as Auletta chattily previewed his work at the 2018 Accelerate conference held by the 4A's (American Association of Advertising Agencies). 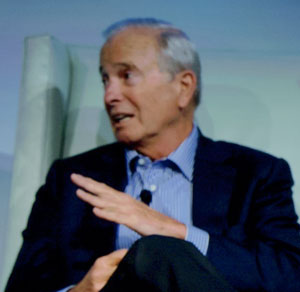 The next stop on the author's tour was the Association of National Advertisers' (ANA) 2018 Advertising Financial Management Conference, where he explored the shaky relationships between brands, agencies, and the public they can't seem to pin down.

These people include three prominent players who piqued the interest of the ANA audience:

"Every time I interviewed someone," Auletta explained, "I would ask, 'Who else should I talk to?' The name that kept recurring is Michael Kassan.

"If an agency is negotiating with a client, who represents both parties at the same table? Michael Kassan."

Kassan's empire was built, in part, on concerns about agency rebates and kickbacks. "A lot of clients thought, 'We need to review our agency business,'" Auletta said. "Who did they hire to orchestrate the review of the agency business? Michael Kassan.

"So, if you were Martin Sorrell – even though you couldn't stand the idea of MediaLink, and particularly Michael Kassan, getting between you and your client – you worry, 'What is he whispering in the ear of my client?'

"That [perception] enhanced his power with the agency [world] that didn't want to embrace him."

But the cycle had started: Because advertisers had embraced Kassan, agencies had to as well. And MediaLink, Auletta observed, over and over again ended up on both sides of the table.

Journalists have long learned to follow the money: In this instance, Auletta pursued the power, embedded himself in MediaLink, and followed Kassan.

As he explained, "I'm not writing an essay. I'm trying to write a narrative story that hopefully more than three people will read."

And Michael Kassan, throughout Frenemies, is that story.

Frenemies cites an email from Greenberg to Auletta that read, "The agency model is dead. It's 70 years old and they're still holding on to the 'art of persuasion' as everything is deconstructing around them.

Greenberg also lamented the fact there is "no vision, no investment, no restructuring, no risk, no collaboration, no innovation ... Everything is run by accountants and bean counters. [People are] like deer in the headlights."

Auletta's view: "Bob Greenberg is a really brilliant guy who's redefining an agency,"

Moreover, he told the ANA gathering, "They're a venture capital firm, they're a design firm, and a great digital advertising agency."

But the agency's head discovered he has no power over the written word. Penguin sent Greenberg an advanced copy of Frenemies, and he was not entirely pleased.

Recalled Auletta, "When he got a copy of the book, he said, 'Oh, that's violent. Can you change that?'

"Obviously, I think he thought maybe he overstated [the case against advertising agencies]…