We estimate global advertising spend (based on 12 major markets) increased by 2.2% in purchasing power parity (PPP) terms in 2015. This is mildly below our previous expectations in July (-0.1pp). A further rise, of 4.4%, is forecast next year.

When measured using PPPs, the 12 markets studied in our International Ad Forecast account for just over two-thirds of global advertising expenditure, so act as a sufficient bellwether for the state of the industry at large. Many are considered mature, and therefore offer trend insights that will evolve in emerging markets over the coming years.

One such pattern is the shift in ad budgets from so called ‘traditional’ media to digital channels. This is epitomised by the rise of advertising via the internet, mainly under the umbrella forms of search and display, but increasingly among the macro formats of video, social and native. Further, mobile is now seen to be acting as a key driver of total online growth.

Internet is now the largest ad medium in half of the markets studied in this report. Ad expenditure is estimated to have grown 17.4% this year, and we forecast a further rise of 12.2% in 2016. When measured in US dollars, growth translates to 17.1% and 12.0% respectively, with spend expected to have reached a record $154.2bn by the end of next year.

Beyond this, digital is playing a growing role in the galvanisation of traditional media. Programmatic trading, the automated buying and selling of ad space, has been the catalyst for hastening spend on out of home, radio, and indeed TV advertising in a number of these markets. 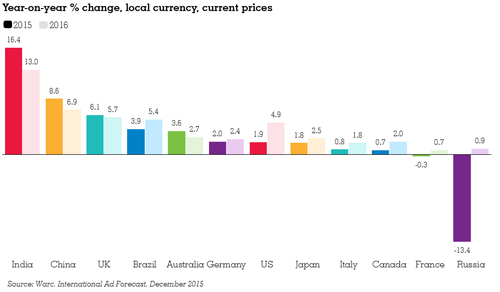 Targeted advertising, informed by an ever-growing and increasingly accurate cache of consumer data, has given rise to technology such as near field communication (NFC) and beacons. The prospect of enhanced personalisation originally heightened the internet’s allure as a marketing tool, and now deployment on the high street is becoming routine as smartphones and digital out of home panels empower ‘moment marketing’.

But within this environment of ‘always on’ consumerism, and the growing necessity to present the right message at the right time, comes a greater need for budget accountability. The exact effectiveness and ROI of digital campaigns are at times lost in the ether as ‘likes’ and ‘shares’ supplant the proven performance metrics of yore. Issues surrounding viewability and ad fraud, atop growing concerns around the prevalence of ad blocking (though adoption is thought to be nominal at present), encompass a digital back-lash demonstrative of the new frontier.

The times, they are a changin’, though one should not dismiss the stalwarts of advertising just yet. While our research finds that, when our 12 markets are taken together, more will be spent delivering marketing messages via the internet than through the television set for the first time next year, TV still holds a competitive edge with the live broadcast of major events, a number of which take place in 2016.

Indeed, on a US dollar basis, TV adspend is forecast to rise in all but one of our major markets next year, as the Summer Olympic and Paralympic Games provide the opportunity for heightened brand exposure. The Euro 2016 football tournament, hosted by France, will boost TV ad revenue across the region in much the same way the Rugby World Cup did on a national level in the UK this year. The US presidential campaigns will also fuel domestic spend in the world’s largest ad market.

We forecast PPP growth of 2.9% for global TV adspend in 2016, or 3.5% when measured in US dollars, amounting to a new high of $149.5bn. This does however follow an estimated 2.5% contraction in global TV spend this year (-1.3% in dollar terms), as less was invested in each of the three largest markets. 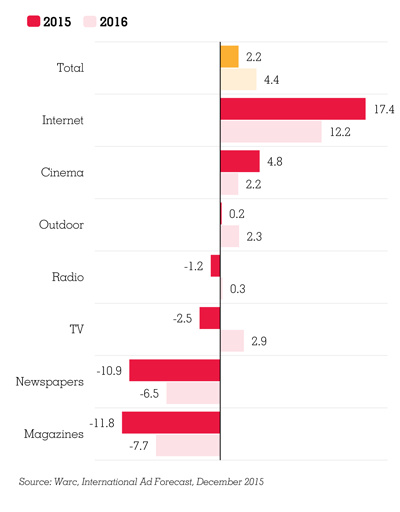 Perhaps the starkest example of a break with the old is the continuing fall in print advertising revenue. While growth can still be found in India – something unlikely to change in the coming years – overall, global print adspend fell by double-digits in 2015. The rate of decline is expected to ease during 2016.

Forecasting is not an exact science, and we can only hope to predict the future by understanding what’s around us today. While many of the markets in this report are experiencing decent GDP growth after a global financial crisis which, in real terms, means advertisers are collectively spending less now than they did in 2007, global economic prosperity is not a foregone conclusion.

A slowdown in China has led to decreased demand which may hamper its key trade partners, chiefly Brazil and Australia. Further, oil prices are at their lowest in seven years, which is hurting major exporters like Russia and Canada. Two of our 12 markets are in recession, while two more met the technical requirement this year.

Be that as it may, it is important to note that real consumer expenditure is expected to rise in almost all of our major markets in 2016. Perhaps one certainty, then, is that the evolution of advertising will continue apace.